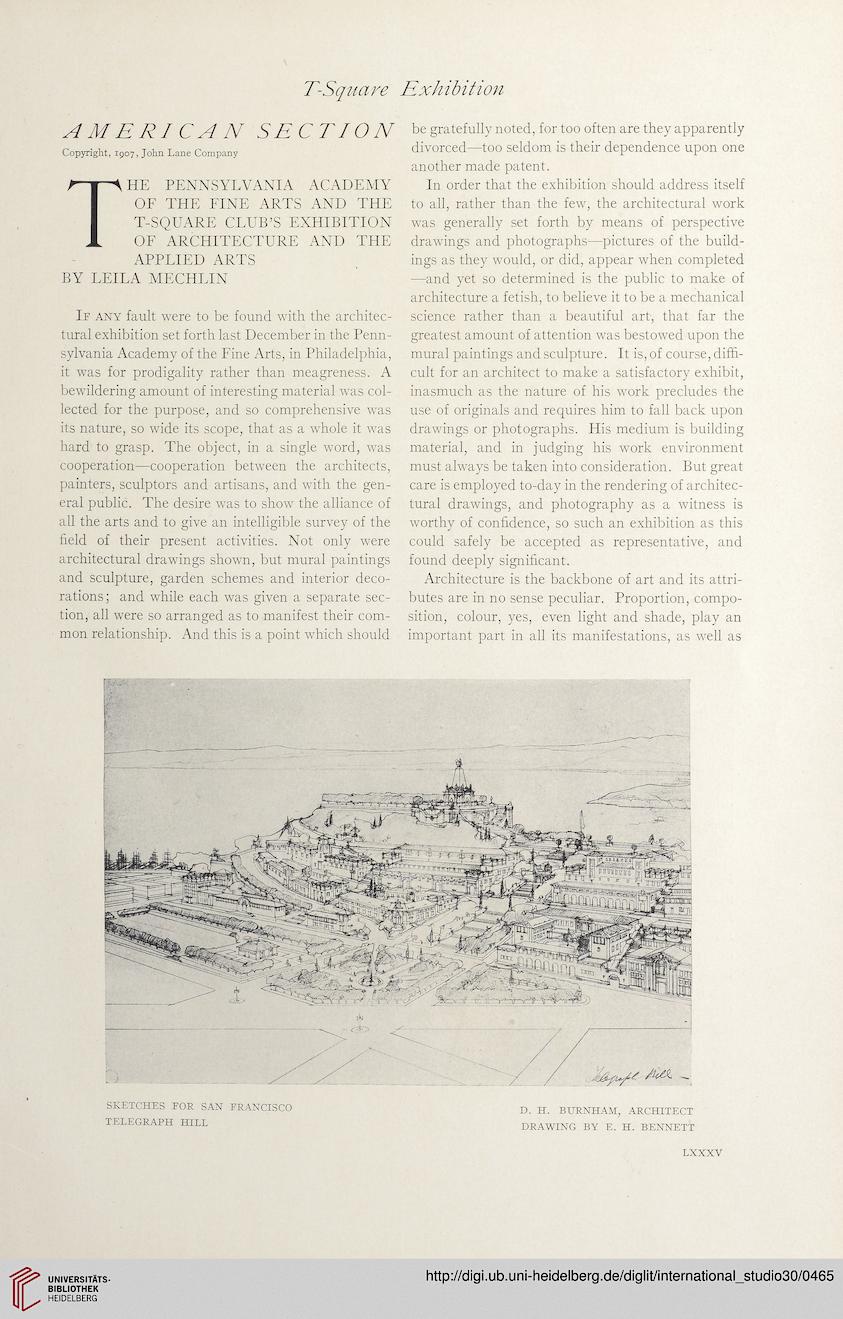 AMERICAN SECTION
Copyright, 1907, John Lane Company
HE PENNSYLVANIA ACADEMY
OF THE FINE ARTS AND THE
T-SQUARE CLUB’S EXHIBITION
OF ARCHITECTURE AND THE
APPLIED ARTS
BY LEILA MECHLIN
Ip any fault were to be found with the architec-
tural exhibition set forth last December in the Penn-
sylvania Academy of the Fine Arts, in Philadelphia,
it was for prodigality rather than meagreness. A
bewildering amount of interesting material was col-
lected for the purpose, and so comprehensive was
its nature, so wide its scope, that as a whole it was
hard to grasp. The object, in a single word, was
cooperation—cooperation between the architects,
painters, sculptors and artisans, and with the gen-
eral public. The desire was to show the alliance of
all the arts and to give an intelligible survey of the
field of their present activities. Not only were
architectural drawings shown, but mural paintings
and sculpture, garden schemes and interior deco-
rations; and while each was given a separate sec-
tion, all were so arranged as to manifest their com-
mon relationship. And this is a point which should

be gratefully noted, for too often are they apparently
divorced—too seldom is their dependence upon one
another made patent.
In order that the exhibition should address itself
to all, rather than the few, the architectural work
was generally set forth by means of perspective
drawings and photographs—pictures of the build-
ings as they would, or did, appear when completed
—and yet so determined is the public to make of
architecture a fetish, to believe it to be a mechanical
science rather than a beautiful art, that far the
greatest amount of attention was bestowed upon the
mural paintings and sculpture. It is, of course, diffi-
cult for an architect to make a satisfactory exhibit,
inasmuch as the nature of his work precludes the
use of originals and requires him to fall back upon
drawings or photographs. His medium is building
material, and in judging his work environment
must always be taken into consideration. But great
care is employed to-day in the rendering of architec-
tural drawings, and photography as a witness is
worthy of confidence, so such an exhibition as this
could safely be accepted as representative, and
found deeply significant.
Architecture is the backbone of art and its attri-
butes are in no sense peculiar. Proportion, compo-
sition, colour, yes, even light and shade, play an
important part in all its manifestations, as well as