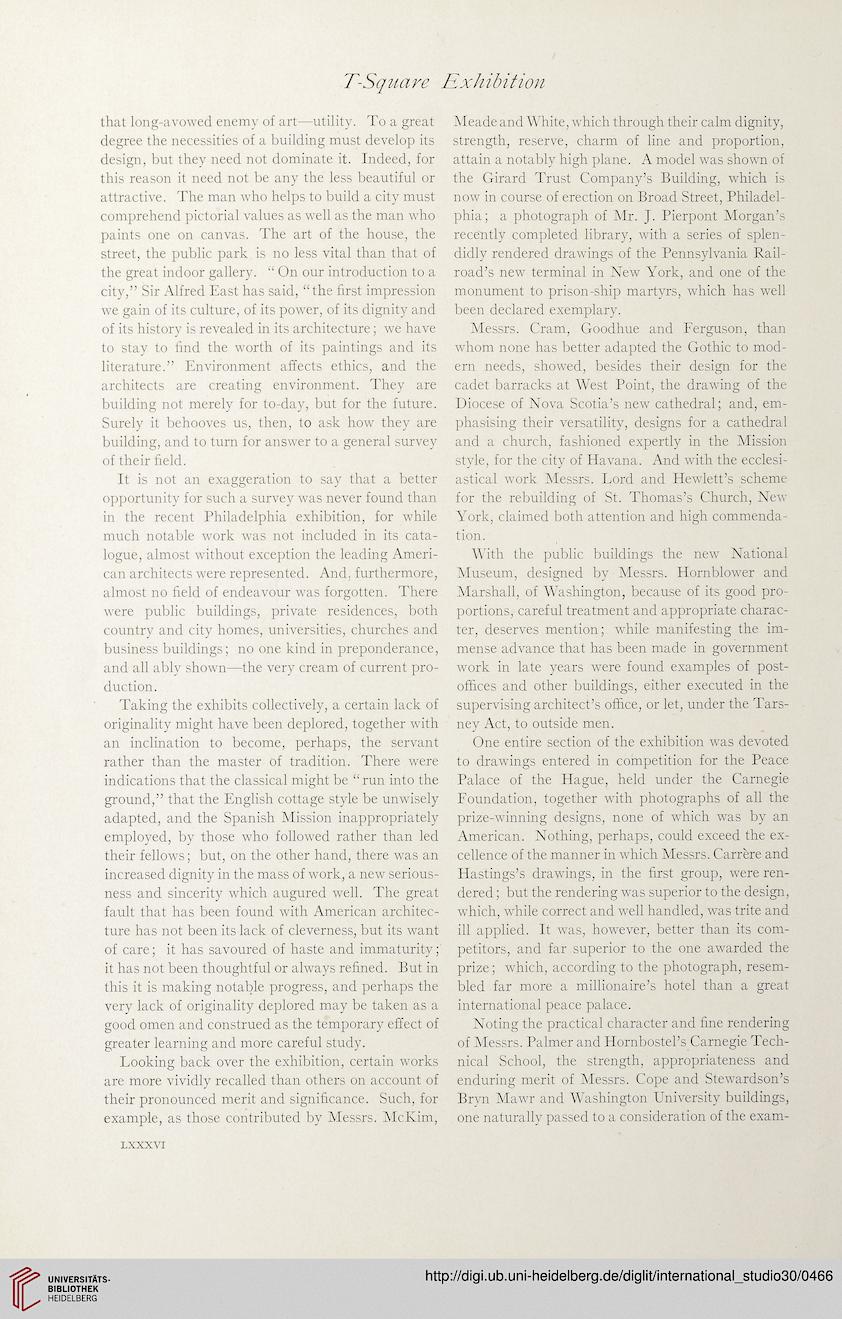 that long-avowed enemy of art—utility. To a great
degree the necessities of a building must develop its
design, but they need not dominate it. Indeed, for
this reason it need not be any the less beautiful or
attractive. The man who helps to build a city must
comprehend pictorial values as well as the man who
paints one on canvas. The art of the house, the
street, the public park is no less vital than that of
the great indoor gallery. “ On our introduction to a
city,” Sir Alfred East has said, “the first impression
we gain of its culture, of its power, of its dignity and
of its history is revealed in its architecture; we have
to stay to find the worth of its paintings and its
literature.” Environment affects ethics, and the
architects are creating environment. They are
building not merely for to-day, but for the future.
Surely it behooves us, then, to ask how they are
building, and to turn for answer to a general survey
of their field.
It is not an exaggeration to say that a better
opportunity for such a survey was never found than
in the recent Philadelphia exhibition, for while
much notable work was not included in its cata-
logue, almost without exception the leading Ameri-
can architects were represented. And, furthermore,
almost no field of endeavour was forgotten. There
were public buildings, private residences, both
country and city homes, universities, churches and
business buildings; no one kind in preponderance,
and all ably shown—the very cream of current pro-
duction.
Taking the exhibits collectively, a certain lack of
originality might have been deplored, together with
an inclination to become, perhaps, the servant
rather than the master of tradition. There were
indications that the classical might be “run into the
ground,” that the English cottage style be unwisely
adapted, and the Spanish Mission inappropriately
employed, by those who followed rather than led
their fellows; but, on the other hand, there was an
increased dignity in the mass of work, a new serious-
ness and sincerity which augured well. The great
fault that has been found with American architec-
ture has not been its lack of cleverness, but its want
of care; it has savoured of haste and immaturity;
it has not been thoughtful or always refined. But in
this it is making notable progress, and perhaps the
very lack of originality deplored may be taken as a
good omen and construed as the temporary effect of
greater learning and more careful study.
Looking back over the exhibition, certain works
are more vividly recalled than others on account of
their pronounced merit and significance. Such, for
example, as those contributed by Messrs. McKirn,

Meade and White, which through their calm dignity,
strength, reserve, charm of line and proportion,
attain a notably high plane. A model was shown of
the Girard Trust Company’s Building, which is
now in course of erection on Broad Street, Philadel-
phia; a photograph of Mr. J. Pierpont Morgan’s
recelitly completed library, with a series of splen-
didly rendered drawings of the Pennsylvania Rail-
road’s new terminal in New York, and one of the
monument to prison-ship martyrs, which has well
been declared exemplary.
Messrs. Cram, Goodhue and Ferguson, than
whom none has better adapted the Gothic to mod-
ern needs, showed, besides their design for the
cadet barracks at West Point, the drawing of the
Diocese of Nova Scotia’s new cathedral; and, em-
phasising their versatility, designs for a cathedral
and a church, fashioned expertly in the Mission
style, for the city of Havana. And with the ecclesi-
astical work Messrs. Lord and Hewlett’s scheme
for the rebuilding of St. Thomas’s Church, New
York, claimed both attention and high commenda-
tion.
With the public buildings the new National
Museum, designed by Messrs. Hornblower and
Marshall, of Washington, because of its good pro-
portions, careful treatment and appropriate charac-
ter, deserves mention; while manifesting the im-
mense advance that has been made in government
work in late years were found examples of post-
offices and other buildings, either executed in the
supervising architect’s office, or let, under the Tars-
ney Act, to outside men.
One entire section of the exhibition was devoted
to drawings entered in competition for the Peace
Palace of the Hague, held under the Carnegie
Foundation, together with photographs of all the
prize-winning designs, none of which was by an
American. Nothing, perhaps, could exceed the ex-
cellence of the manner in which Messrs. Carrere and
Hastings’s drawings, in the first group, were ren-
dered ; but the rendering was superior to the design,
which, while correct and well handled, was trite and
ill applied. It was, however, better than its com-
petitors, and far superior to the one awarded the
prize; which, according to the photograph, resem-
bled far more a millionaire’s hotel than a great
international peace palace.
Noting the practical character and fine rendering
of Messrs. Palmer and Hornbostel’s Carnegie Tech-
nical School, the strength, appropriateness and
enduring merit of Messrs. Cope and Stewardson’s
Brvn Mawr and Washington University buildings,
one naturally passed to a consideration of the exam-