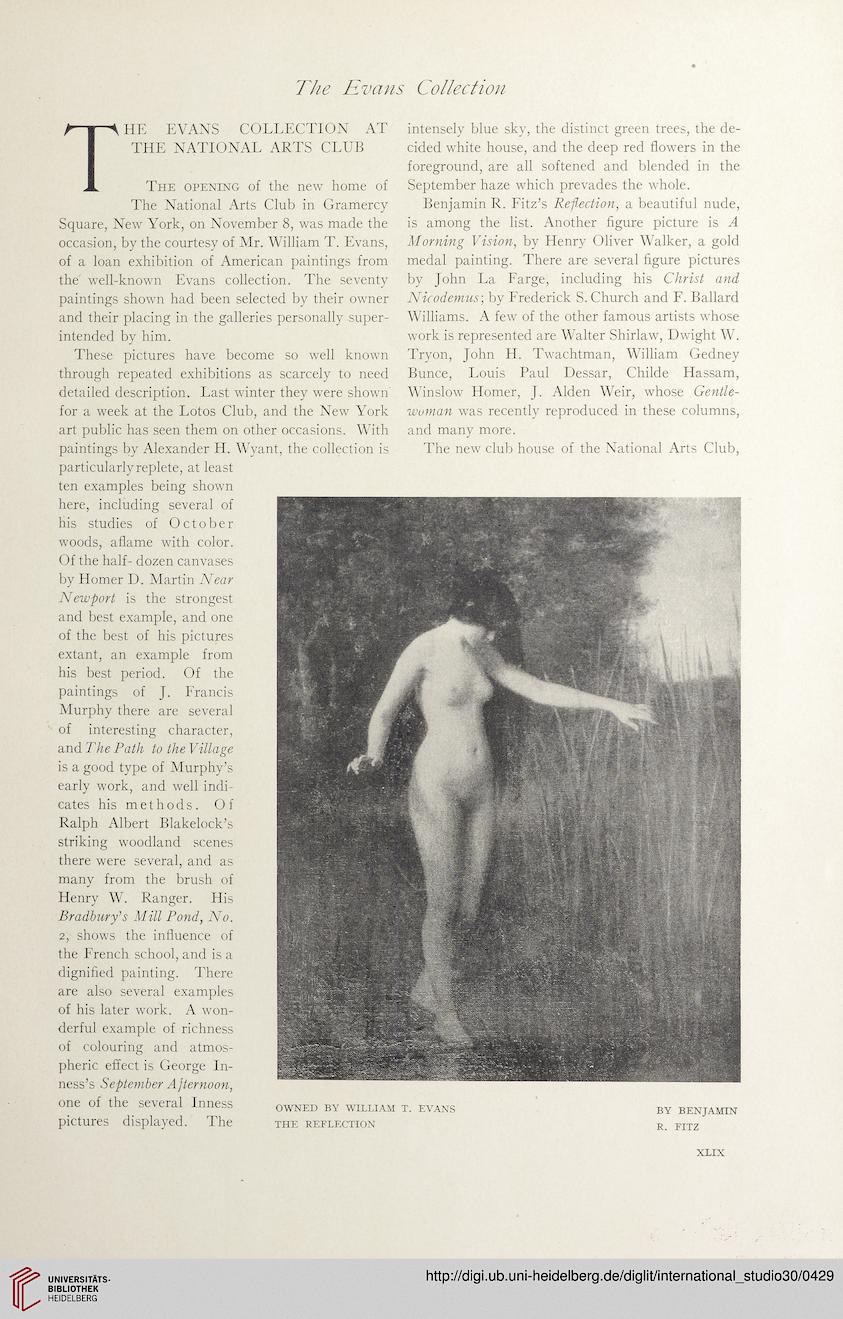 HE EVANS COLLECTION AT
THE NATIONAL ARTS CLUB

The opening of the new home of
The National Arts Club in Gramercy
Square, New York, on November 8, was made the
occasion, by the courtesy of Mr. William T. Evans,
of a loan exhibition of American paintings from
the well-known Evans collection. The seventy
paintings shown had been selected by their owner
and their placing in the galleries personally super-
intended by him.
These pictures have become so well known
through repeated exhibitions as scarcely to need
detailed description. Last winter they were shown
for a week at the Lotos Club, and the New York
art public has seen them on other occasions. With
paintings by Alexander H. Wyant, the collection is
particularly replete, at least
ten examples being shown
here, including several of
his studies of October
woods, aflame with color.
Of the half- dozen canvases
by Homer D. Martin Near
Newport is the strongest
and best example, and one
of the best of his pictures
extant, an example from
his best period. Of the
paintings of J. Francis
Murphy there are several
of interesting character,
and The Path to the Village
is a good type of Murphy’s
early work, and well indi-
cates his methods. Of
Ralph Albert Blakelock’s
striking woodland scenes
there were several, and as
many from the brush of
Henry W. Ranger. His
Bradbury's Mill Pond, No.
2, shows the influence of
the French school, and is a
dignified painting. There
are also several examples
of his later work. A won-
derful example of richness
of colouring and atmos-
pheric effect is George In-
ness’s September A jternoon,
one of the several Inness
pictures displayed. The

intensely blue sky, the distinct green trees, the de-
cided white house, and the deep red flowers in the
foreground, are all softened and blended in the
September haze which prevades the whole.
Benjamin R. Fitz’s Reflection, a beautiful nude,
is among the list. Another figure picture is A
Morning Vision, by Henry Oliver Walker, a gold
medal painting. There are several figure pictures
by John La Farge, including his Christ and
Nicodemus; by Frederick S. Church and F. Ballard
Williams. A few of the other famous artists whose
work is represented are Walter Shirlaw, Dwight W.
Tryon, John H. Twachtman, William Gedney
Bunce, Louis Paul Dessar, Childe Hassam,
Winslow Homer, J. Alden Weir, whose Gentle-
woman was recently reproduced in these columns,
and many more.
The new club house of the National Arts Club,