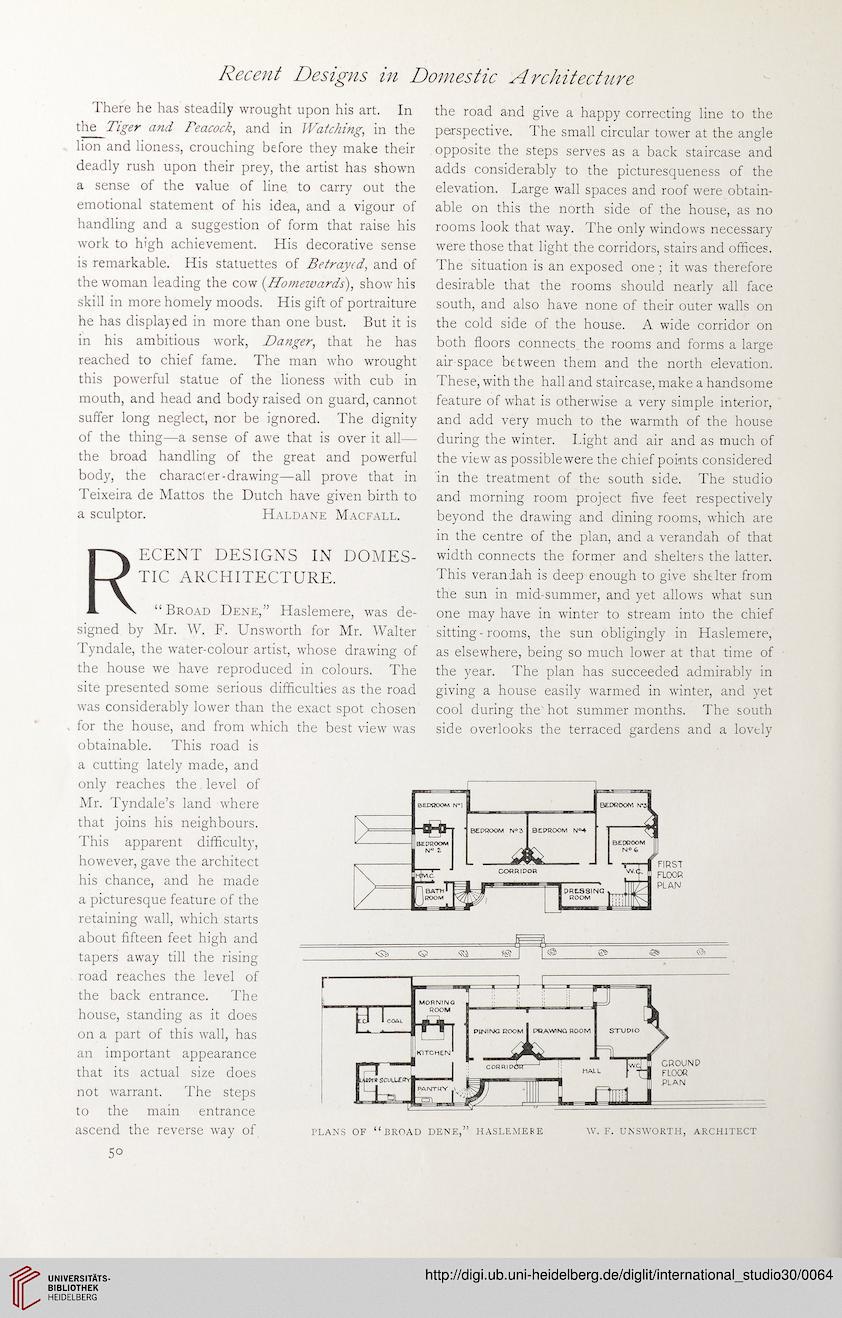 There he has steadily wrought upon his art. In
the Tiger and Teacock, and in Watching, in the
lion and lioness, crouching before they make their
deadly rush upon their prey, the artist has shown
a sense of the value of line to carry out the
emotional statement of his idea, and a vigour of
handling and a suggestion of form that raise his
work to high achievement. His decorative sense
is remarkable. His statuettes of Betrayxd, and of
the woman leading the cow (Homewards), show his
skill in more homely moods. His gift of portraiture
he has displayed in more than one bust. But it is
in his ambitious work, Danger, that he has
reached to chief fame. The man who wrought
this powerful statue of the lioness with cub in
mouth, and head and body raised on guard, cannot
suffer long neglect, nor be ignored. The dignity
of the thing—a sense of awe that is over it all—
the broad handling of the great and powerful
body, the character-drawing—all prove that in
Teixeira de Mattos the Dutch have given birth to
a sculptor. Haldane Macfall.
Recent designs in domes-
tic ARCHITECTURE.
“Broad Dene,” Haslemere, was de-
signed by Mr. W. F. Unsworth for Mr. Walter
Tyndale, the water-colour artist, whose drawing of
the house we have reproduced in colours. The
site presented some serious difficulties as the road
was considerably lower than the exact spot chosen
. for the house, and from which the best view was
obtainable. This road is
a cutting lately made, and
only reaches the level of
Mr. Tyndale’s land where
that joins his neighbours.
This apparent difficulty,
however, gave the architect
his chance, and he made
a picturesque feature of the
retaining wall, which starts
about fifteen feet high and
tapers away till the rising
road reaches the level of
the back entrance. The
house, standing as it does
on a part of this wall, has
an important appearance
that its actual size does
not warrant. The steps
to the main entrance
ascend the reverse way of
5°

the road and give a happy correcting line to the
perspective. The small circular tower at the angle
opposite the steps serves as a back staircase and
adds considerably to the picturesqueness of the
elevation. Large wall spaces and roof were obtain-
able on this the north side of the house, as no
rooms look that way. The only windows necessary
were those that light the corridors, stairs and offices.
The situation is an exposed one; it was therefore
desirable that the rooms should nearly all face
south, and also have none of their outer walls on
the cold side of the house. A wide corridor on
both floors connects the rooms and forms a large
airspace between them and the north elevation.
These, with the hall and staircase, make a handsome
feature of what is otherwise a very simple interior,
and add very much to the warmth of the house
during the winter. Light and air and as much of
the view as possible were the chief points considered
in the treatment of the south side. The studio
and morning room project five feet respectively
beyond the drawing and dining rooms, which are
in the centre of the plan, and a verandah of that
width connects the former and shelters the latter.
This verandah is deep enough to give shelter from
the sun in mid-summer, and yet allows what sun
one may have in winter to stream into the chief
sitting-rooms, the sun obligingly in Haslemere,
as elsewhere, being so much lower at that time of
the year. The plan has succeeded admirably in
giving a house easily warmed in winter, and yet
cool during the' hot summer months. The south
side overlooks the terraced gardens and a lovely