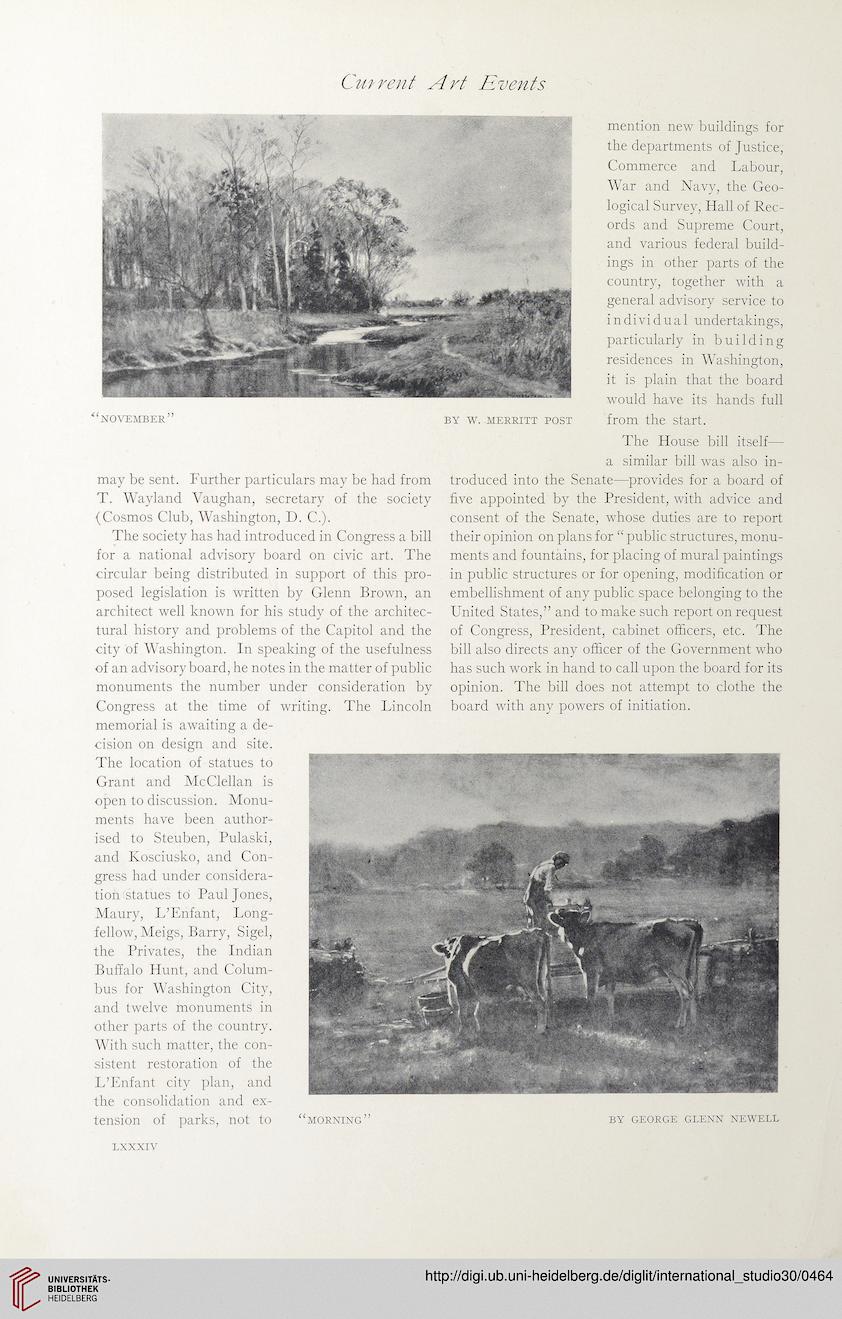 may be sent. Further particulars may be had from
T. Wayland Vaughan, secretary of the society
(Cosmos Club, Washington, D. C.).
The society has had introduced in Congress a bill
for a national advisory board on civic art. The
circular being distributed in support of this pro-
posed legislation is written by Glenn Brown, an
architect well known for his study of the architec-
tural history and problems of the Capitol and the
city of Washington. In speaking of the usefulness
of an advisory board, he notes in the matter of public
monuments the number under consideration by
Congress at the time of writing. The Lincoln
memorial is awaiting a de-
cision on design and site.
The location of statues to
Grant and McClellan is
open to discussion. Monu-
ments have been author-
ised to Steuben, Pulaski,
and Kosciusko, and Con-
gress had under considera-
tion statues to Paul Jones,
Maury, L’Enfant, Long-
fellow, Meigs, Barry, Sigel,
the Privates, the Indian
Buffalo Hunt, and Colum-
bus for Washington City,
and twelve monuments in
other parts of the country.
With such matter, the con-
sistent restoration of the
L’Enfant city plan, and
the consolidation and ex-
tension of parks, not to “morning”

mention new buildings for
the departments of Justice,
Commerce and Labour,
War and Navy, the Geo-
logical Survey, Hall of Rec-
ords and Supreme Court,
and various federal build-
ings in other parts of the
country, together with a
general advisory service to
individual undertakings,
particularly in building
residences in Washington,
it is plain that the board
would have its hands full
from the start.
The House bill itself—
a similar bill was also in-
troduced into the Senate—provides for a board of
five appointed by the President, with advice and
consent of the Senate, whose duties are to report
their opinion on plans for “ public structures, monu-
ments and fountains, for placing of mural paintings
in public structures or for opening, modification or
embellishment of any public space belonging to the
United States,” and to make such report on request
of Congress, President, cabinet officers, etc. The
bill also directs any officer of the Government who
has such work in hand to call upon the board for its
opinion. The bill does not attempt to clothe the
board with any powers of initiation.