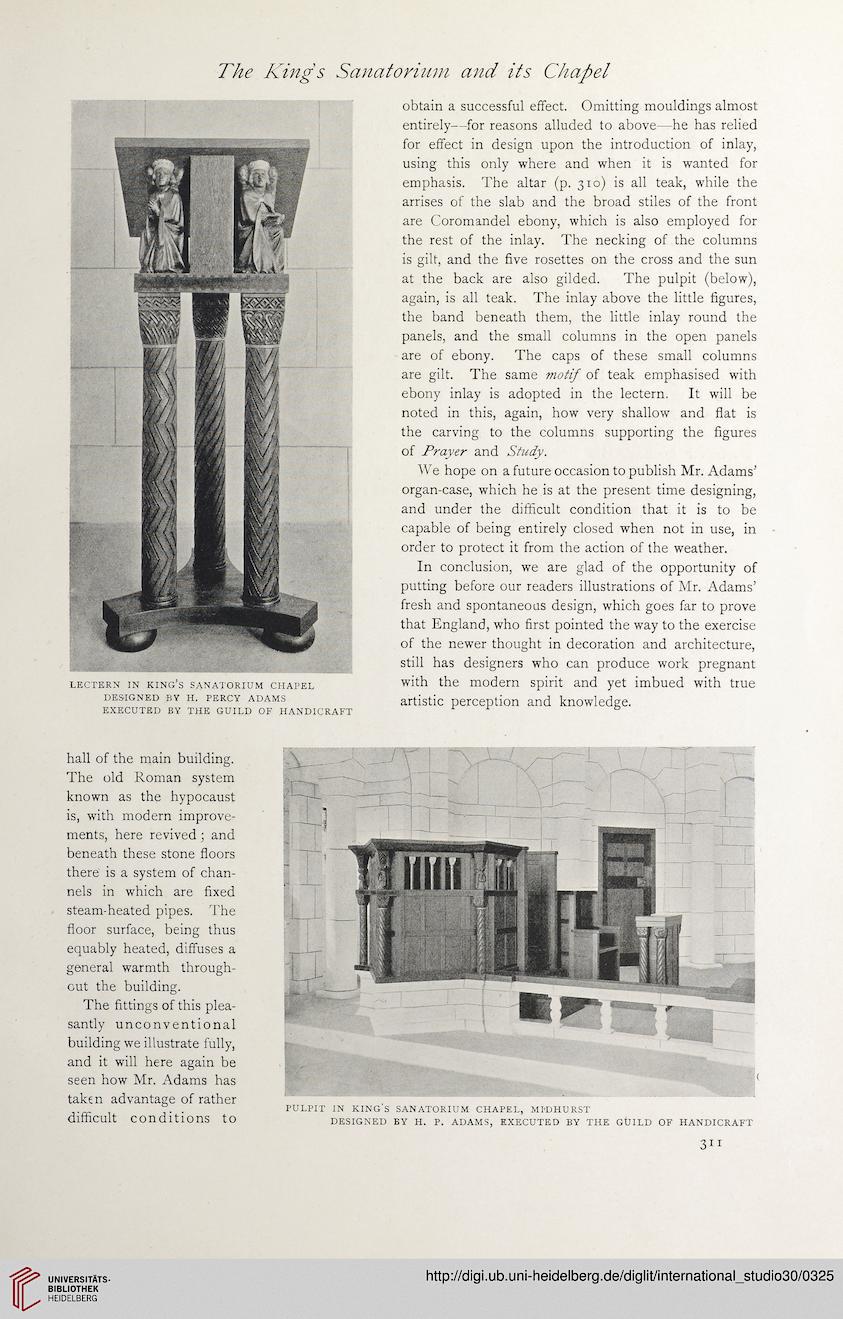 Information about OCR text
The King s Sanatorium and its Chapel


LECTERN IN KING’S SANATORIUM CHAPEL
DESIGNED BY H. PERCY ADAMS
EXECUTED BY THE GUILD OF HANDICRAFT

obtain a successful effect. Omitting mouldings almost
entirely—for reasons alluded to above—he has relied
for effect in design upon the introduction of inlay,
using this only where and when it is wanted for
emphasis. The altar (p. 310) is all teak, while the
arrises of the slab and the broad stiles of the front
are Coromandel ebony, which is also employed for
the rest of the inlay. The necking of the columns
is gilt, and the five rosettes on the cross and the sun
at the back are also gilded. The pulpit (below),
again, is all teak. The inlay above the little figures,
the band beneath them, the little inlay round the
panels, and the small columns in the open panels
are of ebony. The caps of these small columns
are gilt. The same motif of teak emphasised with
ebony inlay is adopted in the lectern. It will be
noted in this, again, how very shallow and flat is
the carving to the columns supporting the figures
of Prayer and Study.
We hope on a future occasion to publish Mr. Adams’
organ-case, which he is at the present time designing,
and under the difficult condition that it is to be
capable of being entirely closed when not in use, in
order to protect it from the action of the weather.
In conclusion, we are glad of the opportunity of
putting before our readers illustrations of Mr. Adams’
fresh and spontaneous design, which goes far to prove
that England, who first pointed the way to the exercise
of the newer thought in decoration and architecture,
still has designers who can produce work pregnant
with the modern spirit and yet imbued with true
artistic perception and knowledge.

hall of the main building.
The old Roman system
known as the hypocaust
is, with modern improve-
ments, here revived; and
beneath these stone floors
there is a system of chan-
nels in which are fixed
steam-heated pipes. The
floor surface, being thus
equably heated, diffuses a
general warmth through-
out the building.
The fittings of this plea-
santly unconventional
building we illustrate fully,
and it will here again be
seen how Mr. Adams has
taken advantage of rather
difficult conditions to