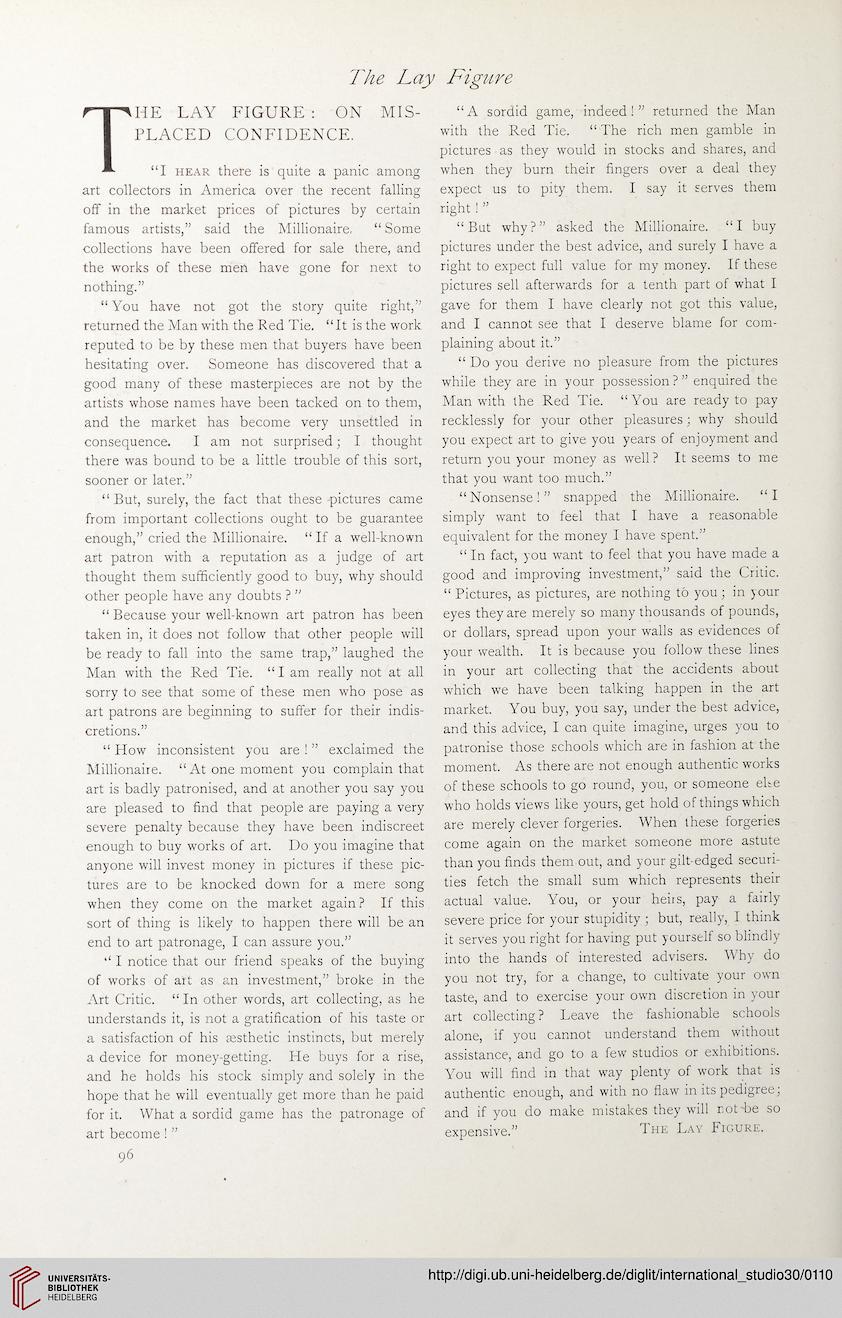 ‘I hear there is quite a panic among
art collectors in America over the recent falling
off in the market prices of pictures by certain
famous artists,” said the Millionaire, “ Some
collections have been offered for sale there, and
the works of these men have gone for next to
nothing.”
“You have not got the story quite right,”
returned the Man with the Red Tie. “It is the work
reputed to be by these men that buyers have been
hesitating over. Someone has discovered that a
good many of these masterpieces are not by the
artists whose names have been tacked on to them,
and the market has become very unsettled in
consequence. I am not surprised; I thought
there was bound to be a little trouble of this sort,
sooner or later.”
“But, surely, the fact that these pictures came
from important collections ought to be guarantee
enough,” cried the Millionaire. “ If a well-known
art patron with a reputation as a judge of art
thought them sufficiently good to buy, why should
other people have any doubts ? ”
“ Because your well-known art patron has been
taken in, it does not follow that other people will
be ready to fall into the same trap,” laughed the
Man with the Red Tie. “I am really not at all
sorry to see that some of these men who pose as
art patrons are beginning to suffer for their indis-
cretions.”
“ How inconsistent you are ! ” exclaimed the
Millionaire. “At one moment you complain that
art is badly patronised, and at another you say you
are pleased to find that people are paying a very
severe penalty because they have been indiscreet
enough to buy works of art. Do you imagine that
anyone will invest money in pictures if these pic-
tures are to be knocked down for a mere song
when they come on the market again ? If this
sort of thing is likely to happen there will be an
end to art patronage, I can assure you.”
“ I notice that our friend speaks of the buying
of works of art as an investment,” broke in the
Art Critic. “ In other words, art collecting, as he
understands it, is not a gratification of his taste or
a satisfaction of his aesthetic instincts, but merely
a device for money-getting. He buys for a rise,
and he holds his stock simply and solely in the
hope that he will eventually get more than he paid
for it. What a sordid game has the patronage of
art become ! ”
96

“A sordid game, indeed!” returned the Man
with the Red Tie. “ The rich men gamble in
pictures as they would in stocks and shares, and
when they burn their fingers over a deal they
expect us to pity them. I say it serves them
right ! ”
“But why?” asked the Millionaire. “I buy
pictures under the best advice, and surely I have a
right to expect full value for my money. If these
pictures sell afterwards for a tenth part of what I
gave for them I have clearly not got this value,
and I cannot see that I deserve blame for com-
plaining about it.”
“ Do you derive no pleasure from the pictures
while they are in your possession?” enquired the
Man with the Red Tie. “You are ready to pay
recklessly for your other pleasures; why should
you expect art to give you years of enjoyment and
return you your money as well ? It seems to me
that you want too much.”
“ Nonsense ! ” snapped the Millionaire. “ I
simply want to feel that I have a reasonable
equivalent for the money I have spent.”
“ In fact, you want to feel that you have made a
good and improving investment,” said the Critic.
“ Pictures, as pictures, are nothing to you ; in your
eyes they are merely so many thousands of pounds,
or dollars, spread upon your walls as evidences of
your wealth. It is because you follow these lines
in your art collecting that the accidents about
which we have been talking happen in the art
market. You buy, you say7, under the best advice,
and this advice, I can quite imagine, urges you to
patronise those schools which are in fashion at the
moment. As there are not enough authentic works
of these schools to go round, you, or someone eke
who holds views like yours, get hold of things which
are merely clever forgeries. When these forgeries
come again on the market someone more astute
than you finds them out, and your gilt-edged securi-
ties fetch the small sum which represents their
actual value. You, or your heirs, pay a fairly
severe price for your stupidity; but, really, I think
it serves you right for having put yourself so blindly
into the hands of interested advisers. Why do
you not try, for a change, to cultivate your own
taste, and to exercise your own discretion in your
art collecting ? Leave the fashionable schools
alone, if you cannot understand them without
assistance, and go to a few studios or exhibitions.
You will find in that way plenty of work that is
authentic enough, and with no flaw in its pedigree;
and if you do make mistakes they will rot-be so
exnensive.” The Lay Figure.