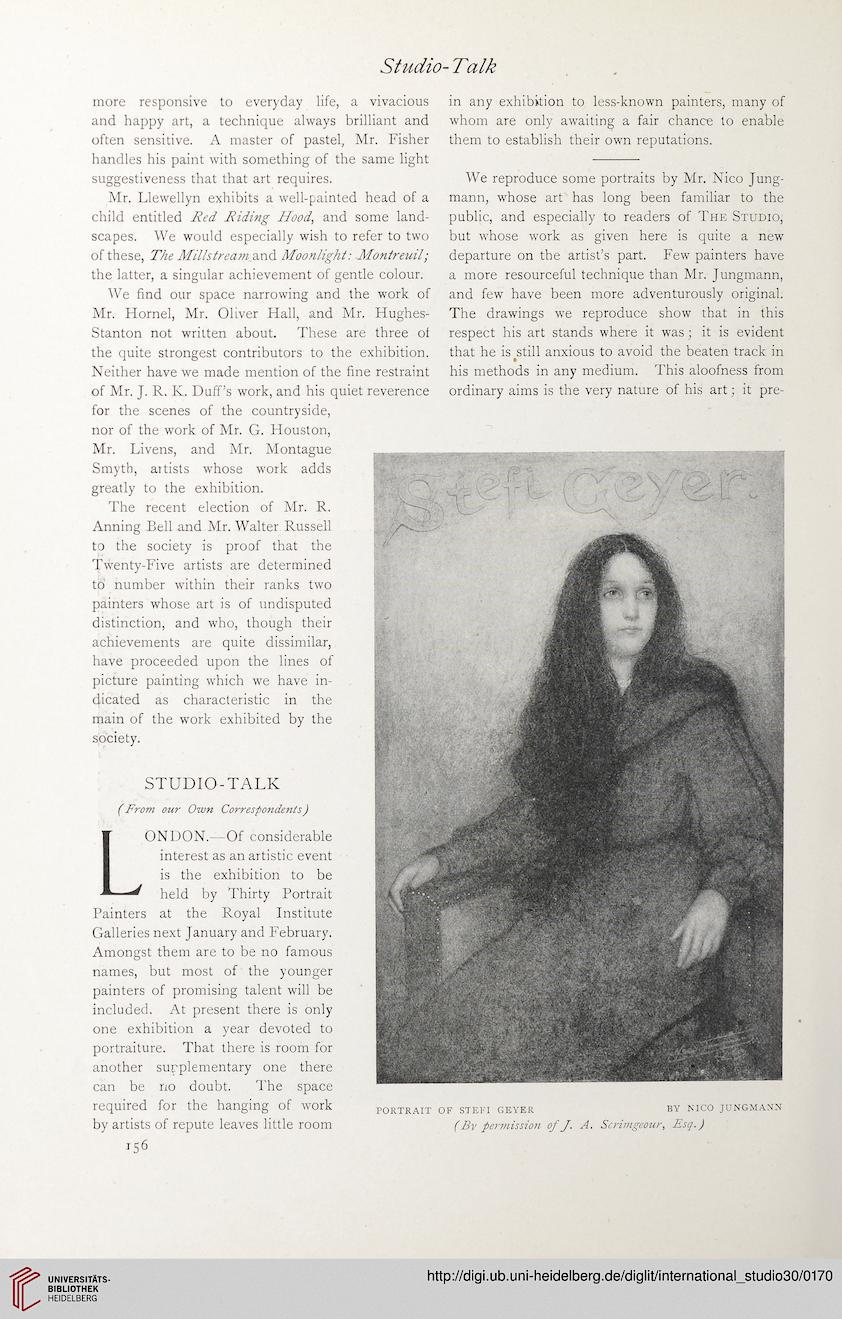 more responsive to everyday life, a vivacious
and happy art, a technique always brilliant and
often sensitive. A master of pastel, Mr. Fisher
handles his paint with something of the same light
suggestiveness that that art requires.
Mr. Llewellyn exhibits a well-painted head of a
child entitled Red Riding Hood, and some land-
scapes. We would especially wish to refer to two
of these, The Millstream^and Moonlight: Alontreuil;
the latter, a singular achievement of gentle colour.
We find our space narrowing and the work of
Mr. Hornel, Mr. Oliver Hall, and Mr. Hughes-
Stanton not written about. These are three of
the quite strongest contributors to the exhibition.
Neither have we made mention of the fine restraint
of Mr. J. R. K. Duff’s work, and his quiet reverence
for the scenes of the countryside,
nor of the work of Mr. G. Houston,
Mr. Livens, and Mr. Montague
Smyth, artists whose work adds
greatly to the exhibition.
The recent election of Mr. R.
Anning Bell and Mr. Walter Russell
to the society is proof that the
Twenty-Five artists are determined
to number within their ranks two
painters whose art is of undisputed
distinction, and who, though their
achievements are quite dissimilar,
have proceeded upon the lines of
picture painting which we have in-
dicated as characteristic in the
main of the work exhibited by the
society.

in any exhibition to less-known painters, many of
whom are only awaiting a fair chance to enable
them to establish their own reputations.

We reproduce some portraits by Mr. Nico Jung-
mann, whose art has long been familiar to the
public, and especially to readers of The Studio,
but whose work as given here is quite a new
departure on the artist’s part. Few painters have
a more resourceful technique than Mr. Jungmann,
and few have been more adventurously original.
The drawings we reproduce show that in this
respect his art stands where it was; it is evident
that he is still anxious to avoid the beaten track in
»
his methods in any medium. This aloofness from
ordinary aims is the very nature of his art; it pre-

LONDON.— Of considerable
interest as an artistic event
is the exhibition to be
held by Thirty Portrait
Painters at the Royal Institute
Galleries next January and February.
Amongst them are to be no famous
names, but most of the younger
painters of promising talent will be
included. At present there is only
one exhibition a year devoted to
portraiture. That there is room for
another supplementary one there
can be no doubt. The space
required for the hanging of work
by artists of repute leaves little room
156