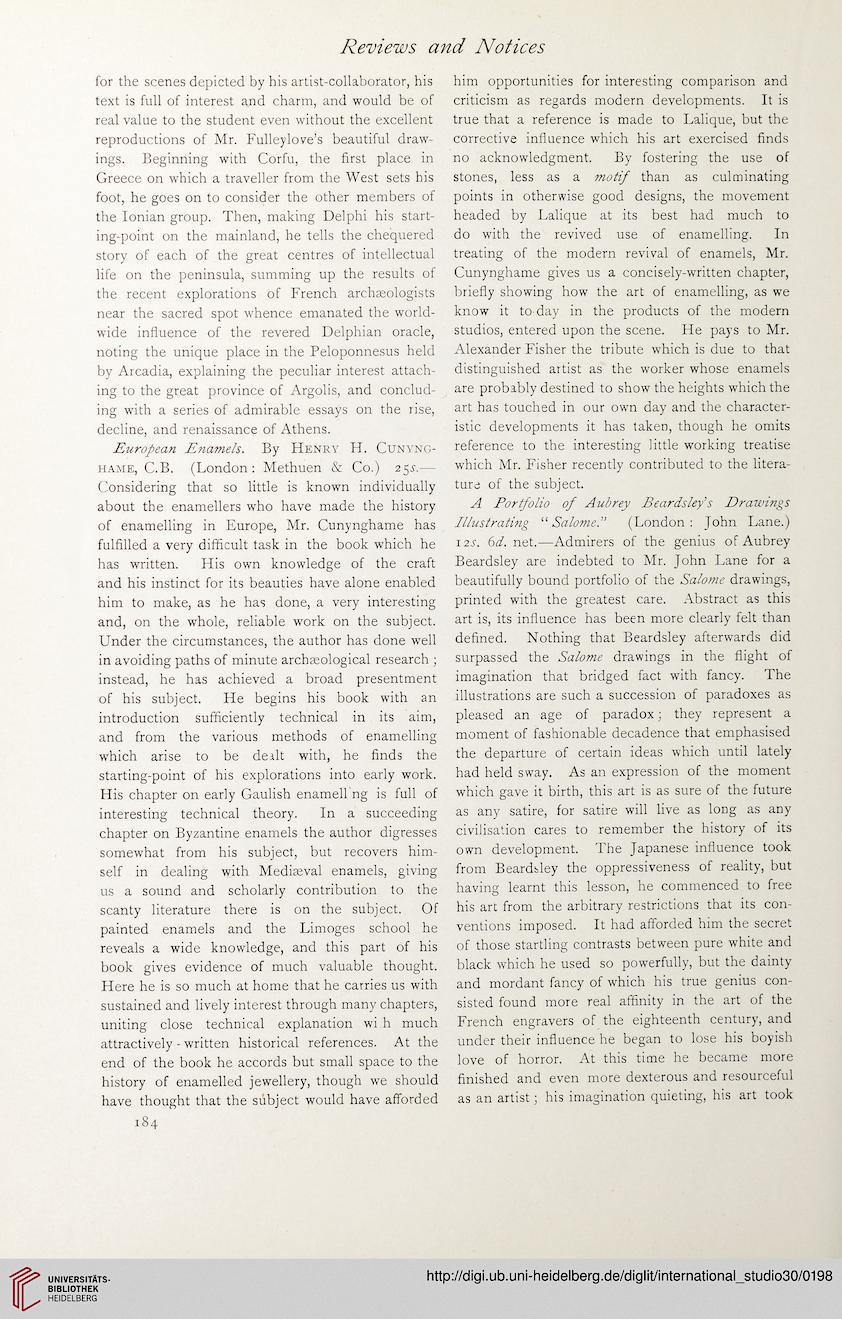 for the scenes depicted by his artist-collaborator, his
text is full of interest and charm, and would be of
real value to the student even without the excellent
reproductions of Mr. Fulleylove’s beautiful draw-
ings. Beginning with Corfu, the first place in
Greece on which a traveller from the West sets his
foot, he goes on to consider the other members of
the Ionian group. Then, making Delphi his start-
ing-point on the mainland, he tells the chequered
story of each of the great centres of intellectual
life on the peninsula, summing up the results of
the recent explorations of French archaeologists
near the sacred spot whence emanated the world-
wide influence of the revered Delphian oracle,
noting the unique place in the Peloponnesus held
by Arcadia, explaining the peculiar interest attach-
ing to the great province of Argolis, and conclud-
ing with a series of admirable essays on the rise,
decline, and renaissance of Athens.
European Enamels. By Henry H. Cunyng-
hame, C.B. (London : Methuen & Co.) 255'.—
Considering that so little is known individually
about the enamellers who have made the history
of enamelling in Europe, Mr. Cunynghame has
fulfilled a very difficult task in the book which he
has written. His own knowledge of the craft
and his instinct for its beauties have alone enabled
him to make, as he has done, a very interesting
and, on the whole, reliable work on the subject.
Under the circumstances, the author has done well
in avoiding paths of minute archaeological research ;
instead, he has achieved a broad presentment
of his subject. He begins his book with an
introduction sufficiently technical in its aim,
and from the various methods of enamelling
which arise to be derlt with, he finds the
starting-point of his explorations into early work.
His chapter on early Gaulish enamell ng is full of
interesting technical theory. In a succeeding
chapter on Byzantine enamels the author digresses
somewhat from his subject, but recovers him-
self in dealing with Mediaeval enamels, giving
us a sound and scholarly contribution to the
scanty literature there is on the subject. Of
painted enamels and the Limoges school he
reveals a wide knowledge, and this part of his
book gives evidence of much valuable thought.
Here he is so much at home that he carries us with
sustained and lively interest through many chapters,
uniting close technical explanation wi h much
attractively - written historical references. At the
end of the book he accords but small space to the
history of enamelled jewellery, though we should
have thought that the subject would have afforded
184

him opportunities for interesting comparison and
criticism as regards modern developments. It is
true that a reference is made to Lalique, but the
corrective influence which his art exercised finds
no acknowledgment. By fostering the use of
stones, less as a motif than as culminating
points in otherwise good designs, the movement
headed by Lalique at its best had much to
do with the revived use of enamelling. In
treating of the modern revival of enamels, Mr.
Cunynghame gives us a concisely-written chapter,
briefly showing how the art of enamelling, as we
know it to-day in the products of the modern
studios, entered upon the scene. He pays to Mr.
Alexander Fisher the tribute which is due to that
distinguished artist as the worker whose enamels
are probably destined to show the heights which the
art has touched in our own day and the character-
istic developments it has taken, though he omits
reference to the interesting little working treatise
which Mr. Fisher recently contributed to the litera-
ture of the subject.
A Portfolio of Aubrey Beardsley’s Drawings
Illustrating “Salome." (London: John Lane.)
12s. 6d. net.—Admirers of the genius of Aubrey
Beardsley are indebted to Mr. John Lane for a
beautifully bound portfolio of the Salome drawings,
printed with the greatest care. Abstract as this
art is, its influence has been more clearly felt than
defined. Nothing that Beardsley afterwards did
surpassed the Salome drawings in the flight of
imagination that bridged fact with fancy. The
illustrations are such a succession of paradoxes as
pleased an age of paradox; they represent a
moment of fashionable decadence that emphasised
the departure of certain ideas which until lately
had held sway. As an expression of the moment
which gave it birth, this art is as sure of the future
as any satire, for satire will live as long as any
civilisation cares to remember the history of its
own development. The Japanese influence took
from Beardsley the oppressiveness of reality, but
having learnt this lesson, he commenced to free
his art from the arbitrary restrictions that its con-
ventions imposed. It had afforded him the secret
of those startling contrasts between pure white and
black which he used so powerfully, but the dainty
and mordant fancy of which his true genius con-
sisted found more real affinity in the art of the
French engravers of the eighteenth century, and
under their influence he began to lose his boyish
love of horror. At this time he became more
finished and even more dexterous and resourceful
as an artist; his imagination quieting, his art took