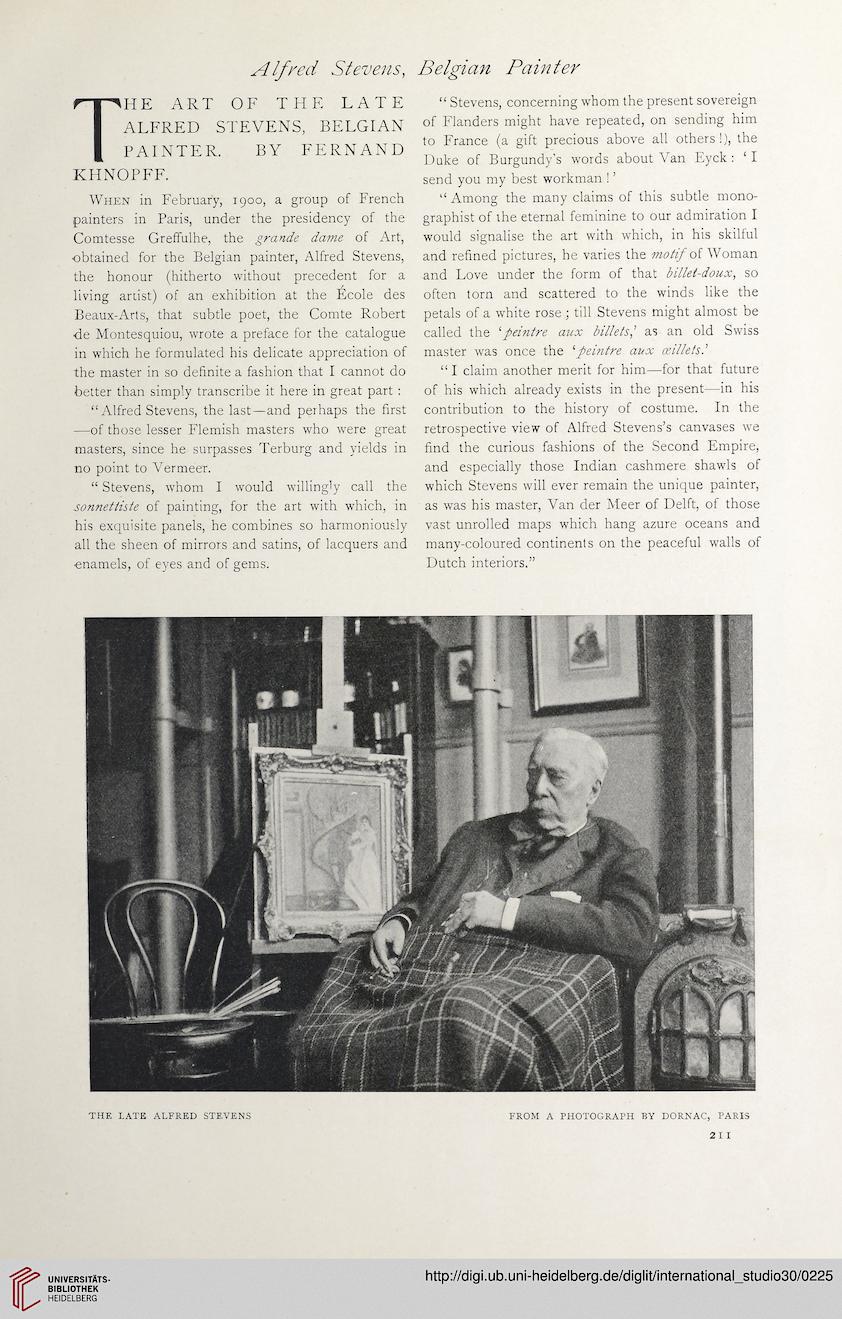 The art of the late
ALFRED STEVENS, BELGIAN
PAINTER. BY FERNAND
KHNOPFF.
When in February, 1900, a group of French
painters in Paris, under the presidency of the
Comtesse Greffulhe, the grande dame of Art,
obtained for the Belgian painter, Alfred Stevens,
the honour (hitherto without precedent for a
living artist) of an exhibition at the Ecole des
Beaux-Arts, that subtle poet, the Comte Robert
•de Montesquiou, wrote a preface for the catalogue
in which he formulated his delicate appreciation of
the master in so definite a fashion that I cannot do
better than simply transcribe it here in great part :
“ Alfred Stevens, the last—and perhaps the first
—of those lesser Flemish masters who were great
masters, since he surpasses Terburg and yields in
no point to Vermeer.
“ Stevens, whom I would willingly call the
sonnettiste of painting, for the art with which, in
his exquisite panels, he combines so harmoniously
all the sheen of mirrors and satins, of lacquers and
•enamels, of eyes and of gems.

“ Stevens, concerning whom the present sovereign
of Flanders might have repeated, on sending him
to France (a gift precious above all others!), the
Duke of Burgundy’s words about Van Eyck : ‘ I
send you my best workman ! ’
“ Among the many claims of this subtle mono-
graphist of the eternal feminine to our admiration I
would signalise the art with which, in his skilful
and refined pictures, he varies the motif of Woman
and Love under the form of that billet-doux, so
often torn and scattered to the winds like the
petals of a white rose; till Stevens might almost be
called the ' peintre aux billets,’ as an old Swiss
master was once the ‘peintre aux oeillets
“I claim another merit for him—for that future
of his which already exists in the present—in his
contribution to the history of costume. In the
retrospective view of Alfred Stevens’s canvases we
find the curious fashions of the Second Empire,
and especially those Indian cashmere shawls of
which Stevens will ever remain the unique painter,
as was his master, Van der Meer of Delft, of those
vast unrolled maps which hang azure oceans and
many-coloured continents on the peaceful walls of
Dutch interiors.”

FROM A PHOTOGRAPH BY DORNAC, PARIS