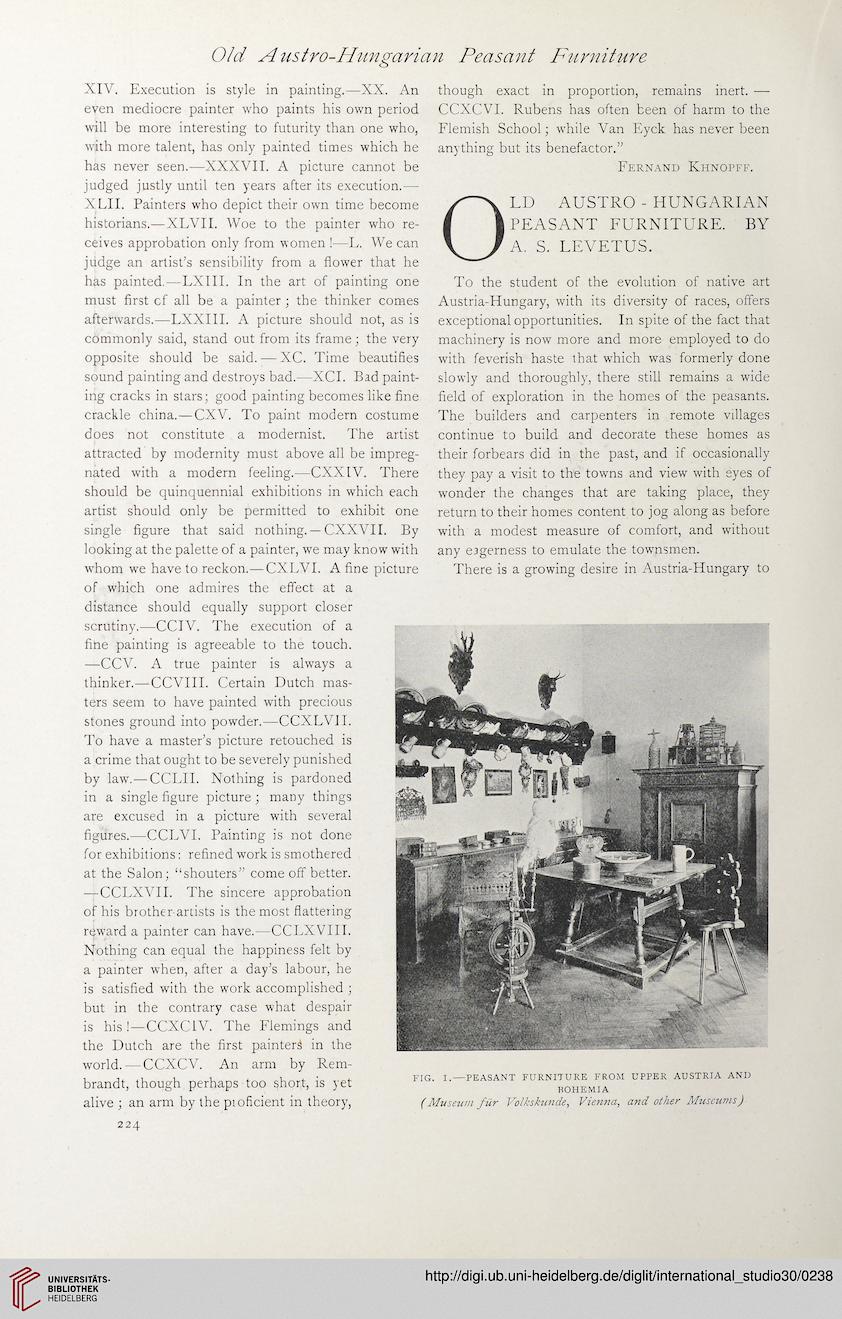 XIV. Execution is style in painting.—XX. An
even mediocre painter who paints his own period
will be more interesting to futurity than one who,
with more talent, has only painted times which he
has never seen.—XXXVII. A picture cannot be
judged justly until ten years after its execution.—
XLII. Painters who depict their own time become
historians.—XLVII. Woe to the painter who re-
ceives approbation only from women !—L. We can
judge an artist’s sensibility from a flower that he
has painted.—LXIII. In the art of painting one
must first cf all be a painter; the thinker comes
afterwards.—LXXIII. A picture should not, as is
commonly said, stand out from its frame; the very
opposite should be said. — XC. Time beautifies
sound painting and destroys bad.—XCI. Bad paint-
ing cracks in stars- good painting becomes like fine
crackle china.—CXV. To paint modern costume
does not constitute a modernist. The artist
attracted by modernity must above all be impreg-
nated with a modern feeling.—CXXIV. There
should be quinquennial exhibitions in which each
artist should only be permitted to exhibit one
single figure that said nothing. —CXXVII. By
looking at the palette of a painter, we may know with
whom we have to reckon.—CXLVI. A fine picture
of which one admires the effect at a
distance should equally support closer
scrutiny.—CCIV. The execution of a
fine painting is agreeable to the touch.
—CCV. A true painter is always a
thinker.—CCVIII. Certain Dutch mas-
ters seem to have painted with precious
stones ground into powder.—CCXLVII.
To have a master’s picture retouched is
a crime that ought to be severely punished
by law. — CCLII. Nothing is pardoned
in a single figure picture ; many things
are excused in a picture with several
figures.—CCLVI. Bainting is not done
for exhibitions: refined work is smothered
at the Salon; “shouters” come off better.
—CCLXVII. The sincere approbation
of his brother-artists is the most flattering
reward a painter can have.—CCLXVIII.
Nothing can equal the happiness felt by
a painter when, after a day’s labour, he
is satisfied with the work accomplished ;
but in the contrary case what despair
is his!—CCXCIV. The Flemings and
the Dutch are the first painters in the
world.—CCXCV. An arm by Rem-
brandt, though perhaps too short, is yet
alive ; an arm by the proficient in theory,

though exact in proportion, remains inert. —
CCXCVI. Rubens has often been of harm to the
Flemish School; while Van Eyck has never been
anything but its benefactor.”
Fernand Khnopff.
LD AUSTRO - HUNGARIAN
PEASANT FURNITURE. BY
A. S. LEVETUS.
To the student of the evolution of native art
Austria-Hungary, with its diversity of races, offers
exceptional opportunities. In spite of the fact that
machinery is now more and more employed to do
with feverish haste that which was formerly done
slowly and thoroughly, there still remains a wide
field of exploration in the homes of the peasants.
The builders and carpenters in remote villages
continue to build and decorate these homes as
their forbears did in the past, and if occasionally
they pay a visit to the towns and view with eyes of
wonder the changes that are taking place, they
return to their homes content to jog along as before
with a modest measure of comfort, and without
any e3gerness to emulate the townsmen.
There is a growing desire in Austria-Hungary to