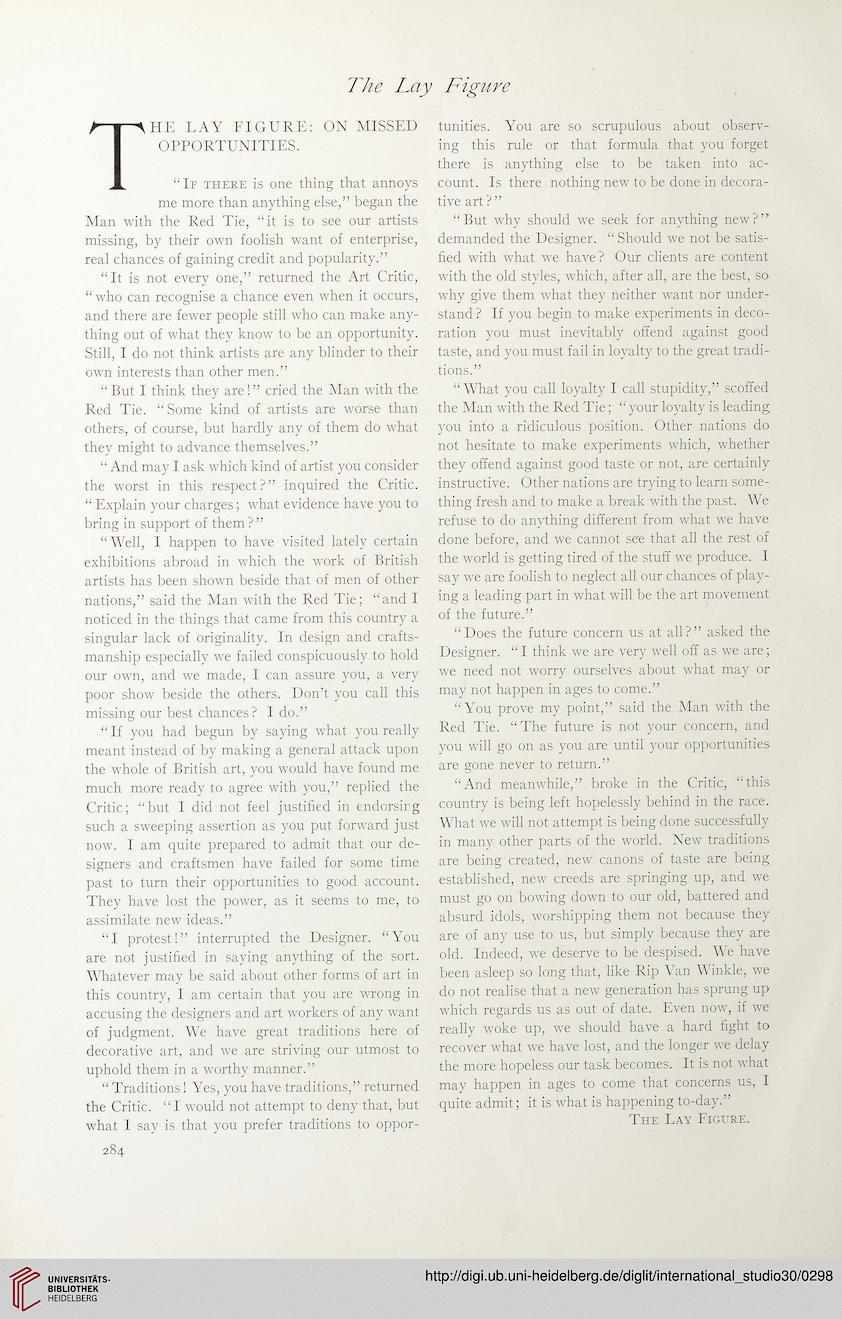 ‘If there is one thing that annoys
me more than anything else,” began the
Man with the Red Tie, “it is to see our artists
missing, by their own foolish want of enterprise,
real chances of gaining credit and popularity.”
“It is not every one,” returned the Art Critic,
“ who can recognise a chance even when it occurs,
and there are fewer people still who can make any-
thing out of what they know to be an opportunity.
Still, I do not think artists are any blinder to their
own interests than other men.”
“ But I think they are!” cried the Man with the
Red Tie. “ Some kind of artists are worse than
others, of course, but hardly any of them do what
they might to advance themselves.”
“ And may I ask which kind of artist you consider
the worst in this respect?” inquired the Critic.
“ Explain your charges; what evidence have you to
bring in support of them?”
“Well, I happen to have visited lately certain
exhibitions abroad in which the work of British
artists has been shown beside that of men of other
nations,” said the Man with the Red Tie; “and I
noticed in the things that came from this country a
singular lack of originality. In design and crafts-
manship especially we failed conspicuously to hold
our own, and we made, I can assure you, a very
poor show beside the others. Don't you call this
missing our best chances? I do.”
“ If you had begun by saying what you really
meant instead of by making a general attack upon
the whole of British art, you would have found me
much more ready to agree with you,” replied the
Critic; “but I did not feel justified in endorsirg
such a sweeping assertion as you put forward just
now. I am quite prepared to admit that our de-
signers and craftsmen have failed for some time
past to turn their opportunities to good account.
They have lost the power, as it seems to me, to
assimilate new ideas.”
“I protest!” interrupted the Designer. “You
are not justified in saying anything of the sort.
Whatever may be said about other forms of art in
this country, I am certain that you are wrong in
accusing the designers and art workers of any want
of judgment. We have great traditions here of
decorative art, and we are striving our utmost to
uphold them in a worthy manner.”
“Traditions! Yes, you have traditions,” returned
the Critic. “I would not attempt to deny that, but
what I say is that you prefer traditions to oppor-

tunities. You are so scrupulous about observ-
ing this rule or that formula that you forget
there is anything else to be taken into ac-
count. Is there nothing new to be done in decora-
tive art?”
“But why should we seek for anything new?”'
demanded the Designer. “ Should we not be satis-
fied with what we have? Our clients are content
with the old styles, which, after all, are the best, so
why give them what they neither want nor under-
stand ? If you begin to make experiments in deco-
ration you must inevitably offend against good
taste, and you must fail in loyalty to the great tradi-
tions.”
“What you call loyalty I call stupidity,” scoffed
the Man with the Red Tie; “ your loyalty is leading
you into a ridiculous position. Other nations do
not hesitate to make experiments which, whether
they offend against good taste or not, are certainly
instructive. Other nations are trying to learn some-
thing fresh and to make a break with the past. We
refuse to do anything different from what we have
done before, and we cannot see that all the rest of
the world is getting tired of the stuff we produce. I
say we are foolish to neglect all our chances of play-
ing a leading part in what will be the art movement
of the future.”
“ Does the future concern us at all ? ” asked the
Designer. “ I think we are very well off as we are;
we need not worry ourselves about what may or
may not happen in ages to come.”
“You prove my point,” said the Man with the
Red Tie. “The future is not your concern, and
you will go on as you are until your opportunities
are gone never to return.”
“And meanwhile,” broke in the Critic, “this
country is being left hopelessly behind in the race.
What we will not attempt is being done successfully
in many other parts of the world. New traditions
are being created, new canons of taste are being
established, new creeds are springing up, and we
must go on bowing down to our old, battered and
absurd idols, worshipping them not because they
are of any use to us, but simply because they are
old. Indeed, we deserve to be despised. We have
been asleep so long that, like Rip Van Winkle, we
do not realise that a new generation has sprung up
which regards us as out of date. Even now, if we
really woke up, we should have a hard fight to
recover what we have lost, and the longer we delay
the more hopeless our task becomes. It is not what
may happen in ages to come that concerns us, I
quite admit; it is what is happening to-day.”
The Lay Figure.