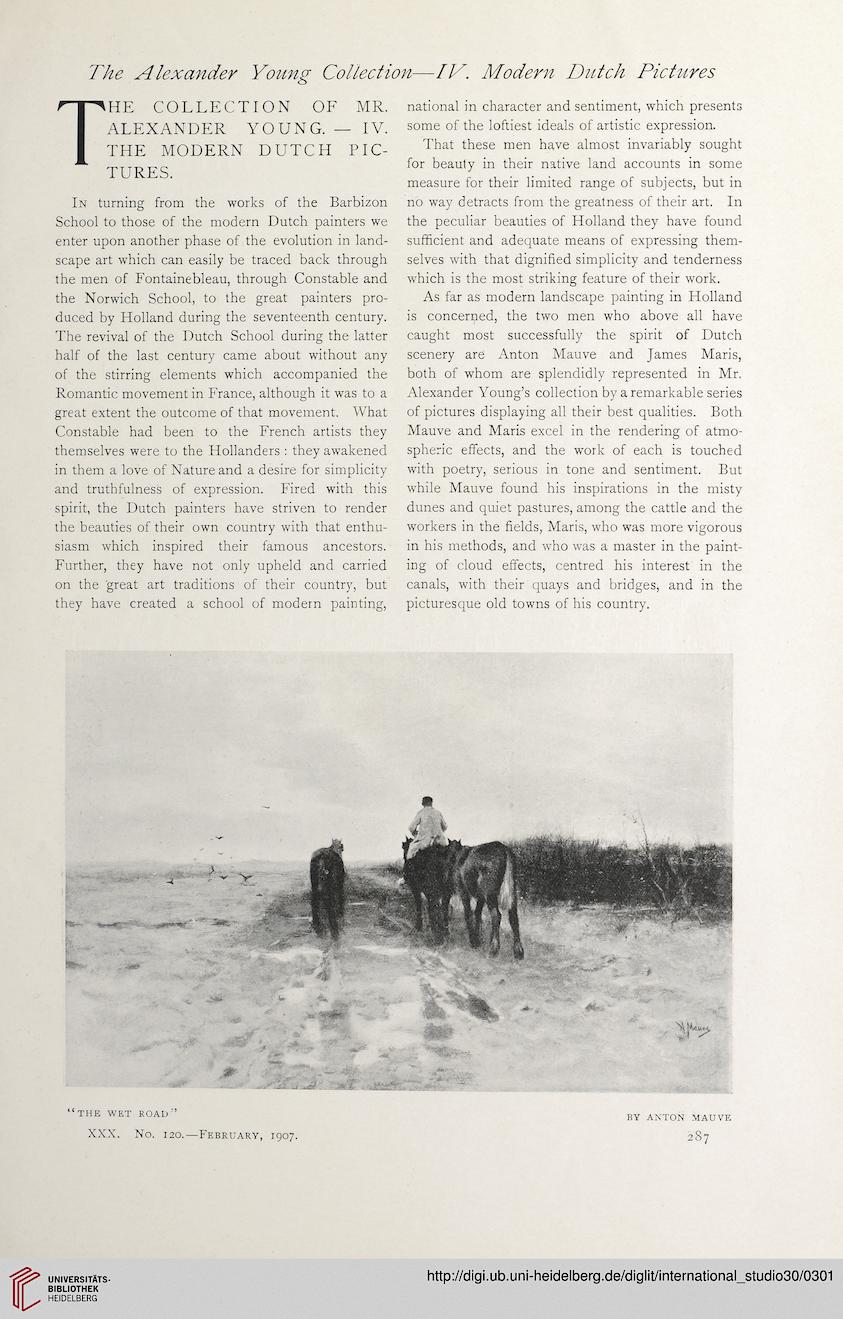 The collection oe mr.
ALEXANDER YOUNG. — IV.
THE MODERN DUTCH PIC-
TURES.
In turning from the works of the Barbizon
School to those of the modern Dutch painters we
enter upon another phase of the evolution in land-
scape art which can easily be traced back through
the men of Fontainebleau, through Constable and
the Norwich School, to the great painters pro-
duced by Holland during the seventeenth century.
The revival of the Dutch School during the latter
half of the last century came about without any
of the stirring elements which accompanied the
Romantic movement in France, although it was to a
great extent the outcome of that movement. What
Constable had been to the French artists they
themselves were to the Hollanders : they awakened
in them a love of Nature and a desire for simplicity
and truthfulness of expression. Fired with this
spirit, the Dutch painters have striven to render
the beauties of their own country with that enthu-
siasm which inspired their famous ancestors.
Further, they have not only upheld and carried
on the great art traditions of their country, but
they have created a school of modern painting,

national in character and sentiment, which presents
some of the loftiest ideals of artistic expression.
That these men have almost invariably sought
for beauty in their native land accounts in some
measure for their limited range of subjects, but in
no way detracts from the greatness of their art. In
the peculiar beauties of Holland they have found
sufficient and adequate means of expressing them-
selves with that dignified simplicity and tenderness
which is the most striking feature of their work.
As far as modern landscape painting in Holland
is concerned, the two men who above all have
caught most successfully the spirit of Dutch
scenery are Anton Mauve and James Maris,
both of whom are splendidly represented in Mr.
Alexander Young’s collection by a remarkable series
of pictures displaying all their best qualities. Both
Mauve and Maris excel in the rendering of atmo-
spheric effects, and the work of each is touched
with poetry, serious in tone and sentiment. But
while Mauve found his inspirations in the misty
dunes and quiet pastures, among the cattle and the
workers in the fields, Maris, who was more vigorous
in his methods, and who was a master in the paint-
ing of cloud effects, centred his interest in the
canals, with their quays and bridges, and in the
picturesque old towns of his country.