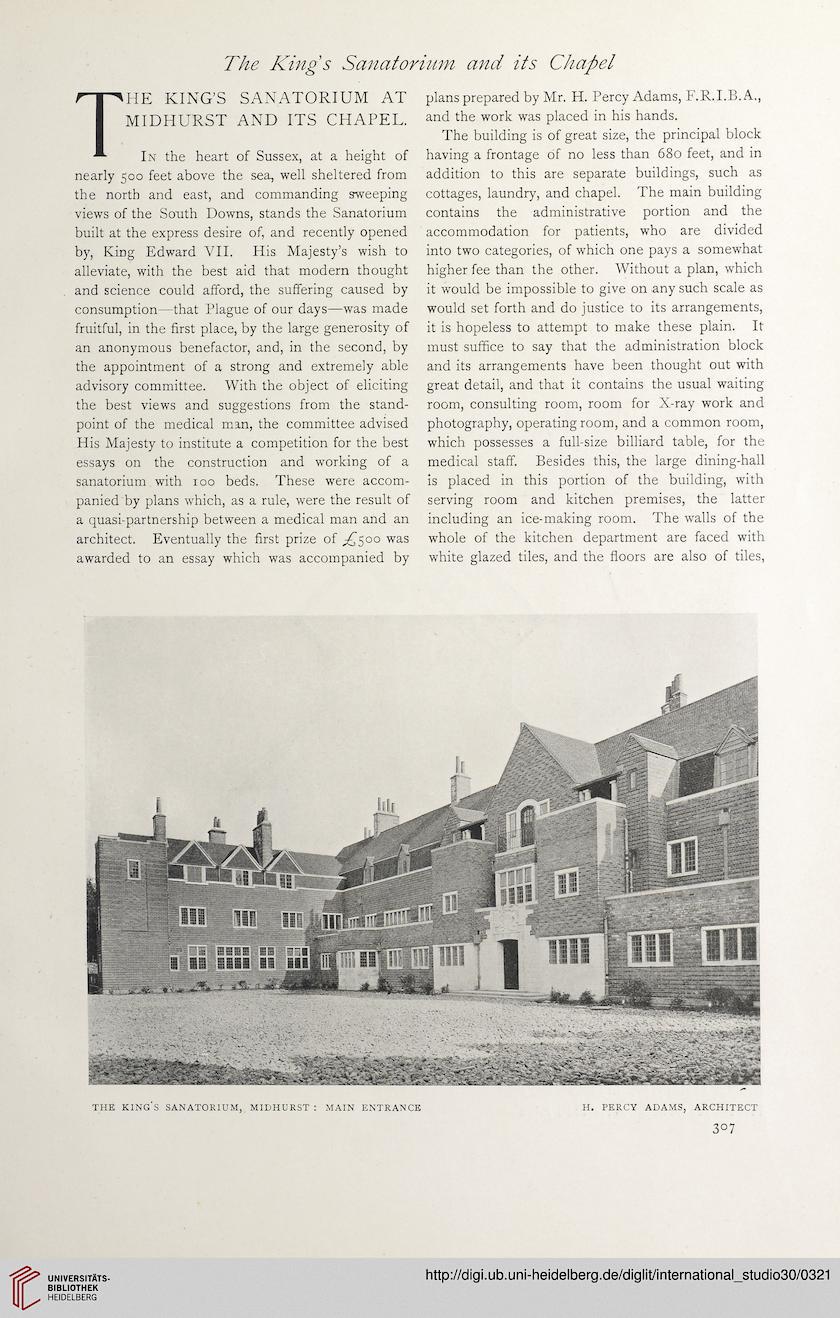 Information about OCR text
The King s Sanatorium and its Chapel

THE KING’S SANATORIUM AT
MIDHURST AND ITS CHAPEL.
In the heart of Sussex, at a height of
nearly 500 feet above the sea, well sheltered from
the north and east, and commanding sweeping
views of the South Downs, stands the Sanatorium
built at the express desire of, and recently opened
by, King Edward VII. His Majesty’s wish to
alleviate, with the best aid that modern thought
and science could afford, the suffering caused by
consumption—that Plague of our days—was made
fruitful, in the first place, by the large generosity of
an anonymous benefactor, and, in the second, by
the appointment of a strong and extremely able
advisory committee. With the object of eliciting
the best views and suggestions from the stand-
point of the medical man, the committee advised
His Majesty to institute a competition for the best
essays on the construction and working of a
sanatorium with 100 beds. These were accom-
panied by plans which, as a rule, were the result of
a quasi-partnership between a medical man and an
architect. Eventually the first prize of ^500 was
awarded to an essay which was accompanied by

plans prepared by Mr. H. Percy Adams, F.R.I.B. A.,
and the work was placed in his hands.
The building is of great size, the principal block
having a frontage of no less than 680 feet, and in
addition to this are separate buildings, such as
cottages, laundry, and chapel. The main building
contains the administrative portion and the
accommodation for patients, who are divided
into two categories, of which one pays a somewhat
higher fee than the other. Without a plan, which
it would be impossible to give on any such scale as
would set forth and do justice to its arrangements,
it is hopeless to attempt to make these plain. It
must suffice to say that the administration block
and its arrangements have been thought out with
great detail, and that it contains the usual waiting
room, consulting room, room for X-ray work and
photography, operating room, and a common room,
which possesses a full-size billiard table, for the
medical staff. Besides this, the large dining-hall
is placed in this portion of the building, with
serving room and kitchen premises, the latter
including an ice-making room. The walls of the
whole of the kitchen department are faced with
white glazed tiles, and the floors are also of tiles,