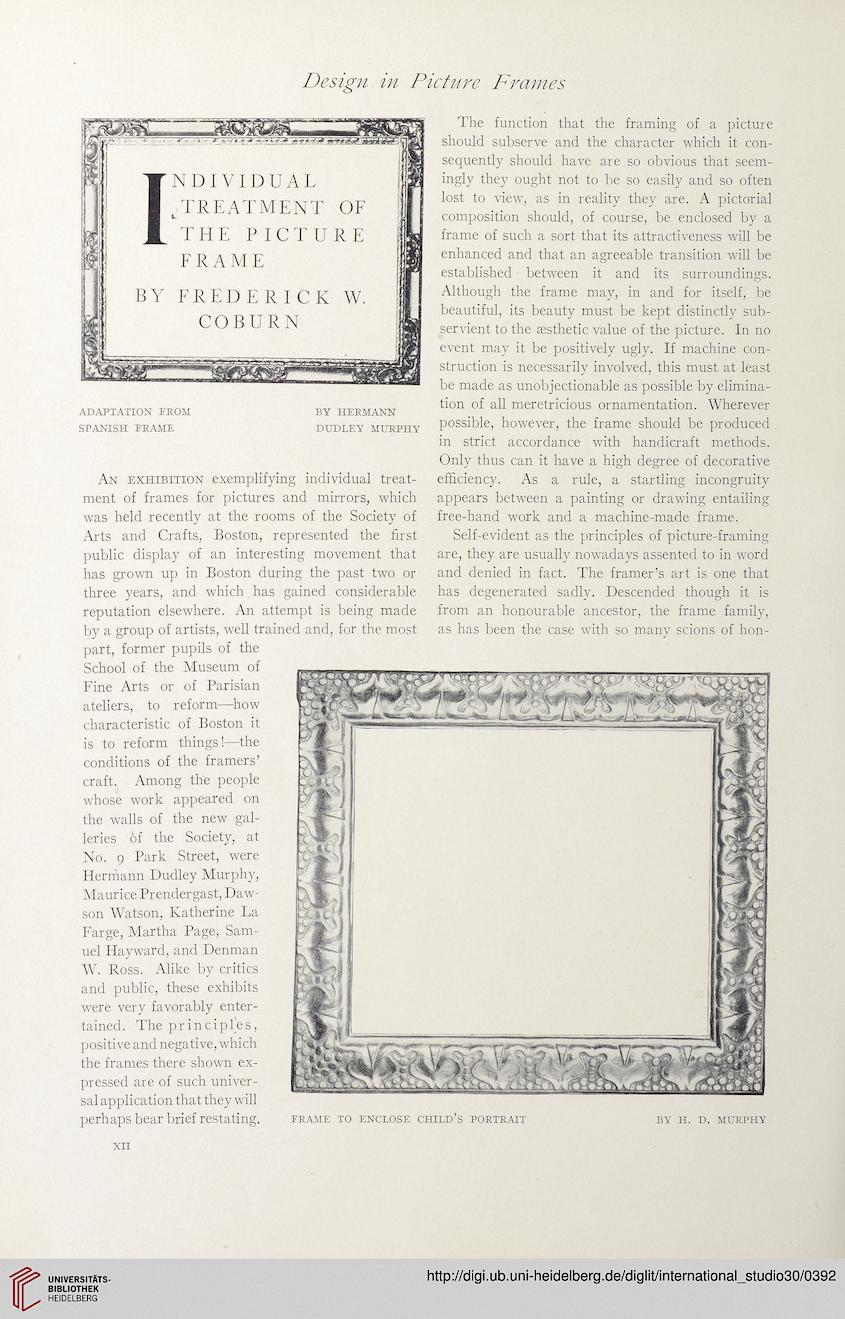 An exhibition exemplifying individual treat-
ment of frames for pictures and mirrors, which
was held recently at the rooms of the Society of
Arts and Crafts, Boston, represented the first
public display of an interesting movement that
has grown up in Boston during the past two or
three years, and which has gained considerable
reputation elsewhere. An attempt is being made
by a group of artists, well trained and, for the most
part, former pupils of the
School of the Museum of
Fine Arts or of Parisian
ateliers, to reform—how
characteristic of Boston it
is to reform things!—the
conditions of the framers’
craft. Among the people
whose work appeared on
the walls of the new gal-
leries of the Society, at
No. 9 Park Street, were
Hermann Dudley Murphy,
Maurice Prendergast, Daw-
son Watson, Katherine La
Farge, Martha Page, Sam-
uel Hayward, and Denman
W. Ross. Alike by critics
and public, these exhibits
were very favorably enter-
tained. The principles,
positive and negative, which
the frames there shown ex-
pressed are of such univer-
sal application that they will
perhaps bear brief restating.

The function that the framing of a picture
should subserve and the character which it con-
sequently should have are so obvious that seem-
ingly they ought not to be so easily and so often
lost to view, as in reality they are. A pictorial
composition should, of course, be enclosed by a
frame of such a sort that its attractiveness will be
enhanced and that an agreeable transition will be
established - between it and its surroundings.
Although the frame may, in and for itself, be
beautiful, its beauty must be kept distinctly sub-
servient to the aesthetic value of the picture. In no
event may it be positively ugly. If machine con-
struction is necessarily involved, this must at least
be made as unobjectionable as possible by elimina-
tion of all meretricious ornamentation. Wherever
possible, however, the frame should be produced
in strict accordance with handicraft methods.
Only thus can it have a high degree of decorative
efficiency. As a rule, a startling incongruity
appears between a painting or drawing entailing
free-hand work and a machine-made frame.
Self-evident as the principles of picture-framing
are, they are usually nowadays assented to in word
and denied in fact. The framer’s art is one that
has degenerated sadly. Descended though it is
from an honourable ancestor, the frame family,
as has been the case with so manv scions of hon-