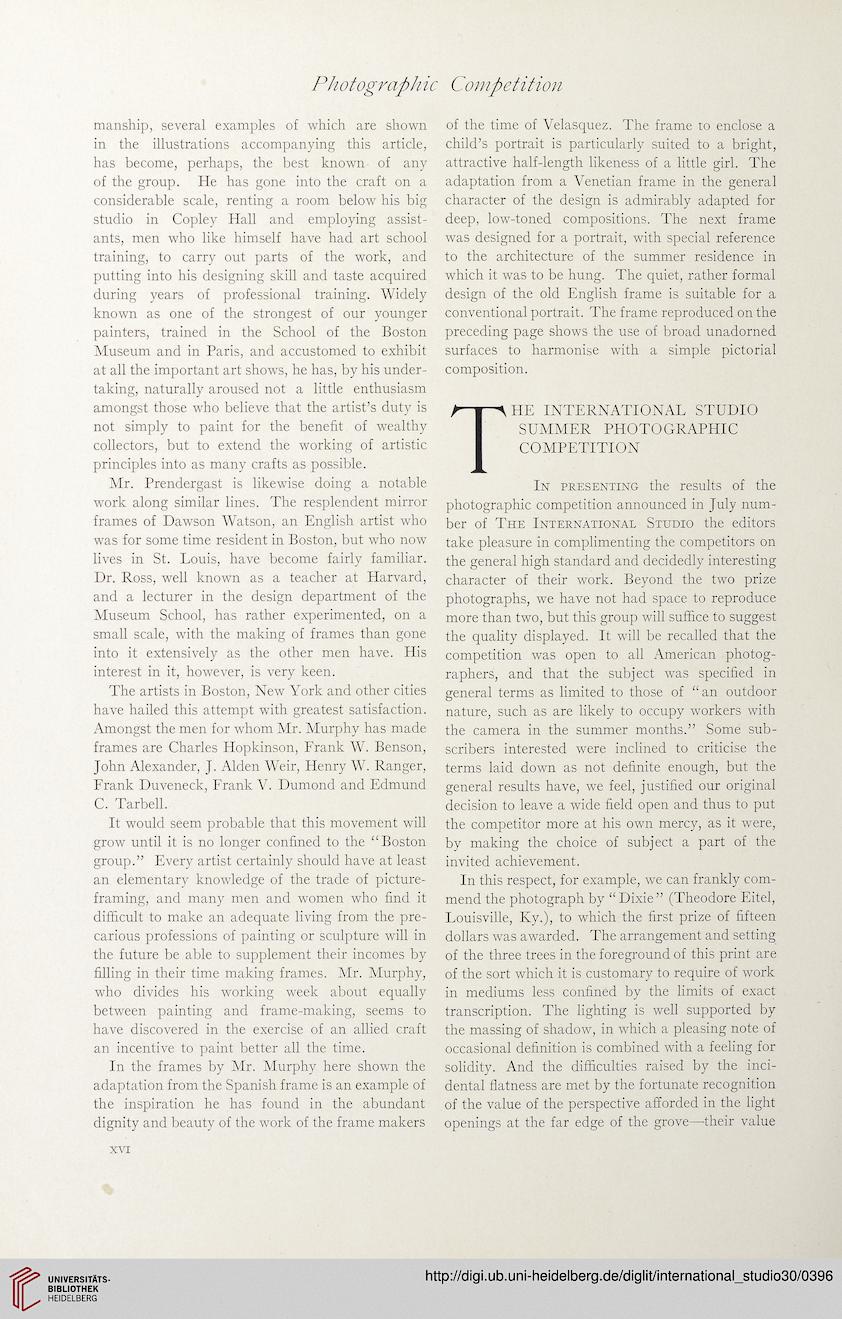 manship, several examples of which are shown
in the illustrations accompanying this article,
has become, perhaps, the best known of any
of the group. He has gone into the craft on a
considerable scale, renting a room below his big
studio in Copley Hall and employing assist-
ants, men who like himself have had art school
training, to carry out parts of the work, and
putting into his designing skill and taste acquired
during years of professional training. Widely
known as one of the strongest of our younger
painters, trained in the School of the Boston
Museum and in Paris, and accustomed to exhibit
at all the important art shows, he has, by his under-
taking, naturally aroused not a little enthusiasm
amongst those who believe that the artist’s duty is
not simply to paint for the benefit of wealthy
collectors, but to extend the working of artistic
principles into as many crafts as possible.
Mr. Prendergast is likewise doing a notable
work along similar lines. The resplendent mirror
frames of Dawson Watson, an English artist who
was for some time resident in Boston, but who now
lives in St. Louis, have become fairly familiar.
Dr. Ross, well known as a teacher at Harvard,
and a lecturer in the design department of the
Museum School, has rather experimented, on a
small scale, with the making of frames than gone
into it extensively as the other men have. His
interest in it, however, is very keen.
The artists in Boston, New York and other cities
have hailed this attempt with greatest satisfaction.
Amongst the men for whom Mr. Murphy has made
frames are Charles Hopkinson, Frank W. Benson,
John Alexander, J. Alden Weir, Henry W. Ranger,
Frank Duveneck, Frank V. Durnond and Edmund
C. Tarbell.
It would seem probable that this movement will
grow until it is no longer confined to the “Boston
group.” Every artist certainly should have at least
an elementary knowledge of the trade of picture-
framing, and many men and women who find it
difficult to make an adequate living from the pre-
carious professions of painting or sculpture will in
the future be able to supplement their incomes by
filling in their time making frames. Mr. Murphy,
who divides his working week about equally
between painting and frame-making, seems to
have discovered in the exercise of an allied craft
an incentive to paint better all the time.
In the frames by Mr. Murphy here shown the
adaptation from the Spanish frame is an example of
the inspiration he has found in the abundant
dignity and beauty of the work of the frame makers

of the time of Velasquez. The frame to enclose a
child’s portrait is particularly suited to a bright,
attractive half-length likeness of a little girl. The
adaptation from a Venetian frame in the general
character of the design is admirably adapted for
deep, low-toned compositions. The next frame
was designed for a portrait, with special reference
to the architecture of the summer residence in
which it was to be hung. The quiet, rather formal
design of the old English frame is suitable for a
conventional portrait. The frame reproduced on the
preceding page shows the use of broad unadorned
surfaces to harmonise with a simple pictorial
composition.
The international studio
SUMMER PHOTOGRAPHIC
COMPETITION
In presenting the results of the
photographic competition announced in July num-
ber of The International Studio the editors
take pleasure in complimenting the competitors on
the general high standard and decidedly interesting
character of their work. Beyond the two prize
photographs, we have not had space to reproduce
more than two, but this group will suffice to suggest
the quality displayed. It will be recalled that the
competition was open to all American photog-
raphers, and that the subject was specified in
general terms as limited to those of “an outdoor
nature, such as are likely to occupy workers with
the camera in the summer months.” Some sub-
scribers interested were inclined to criticise the
terms laid down as not definite enough, but the
general results have, we feel, justified our original
decision to leave a wide field open and thus to put
the competitor more at his own mercy, as it were,
by making the choice of subject a part of the
invited achievement.
In this respect, for example, we can frankly com-
mend the photograph by “Dixie” (Theodore Eitel,
Louisville, Ky.), to which the first prize of fifteen
dollars was awarded. The arrangement and setting
of the three trees in the foreground of this print are
of the sort which it is customary to require of work
in mediums less confined by the limits of exact
transcription. The lighting is well supported by
the massing of shadow, in which a pleasing note of
occasional definition is combined with a feeling for
solidity. And the difficulties raised by the inci-
dental flatness are met by the fortunate recognition
of the value of the perspective afforded in the light
openings at the far edge of the grove—-their value