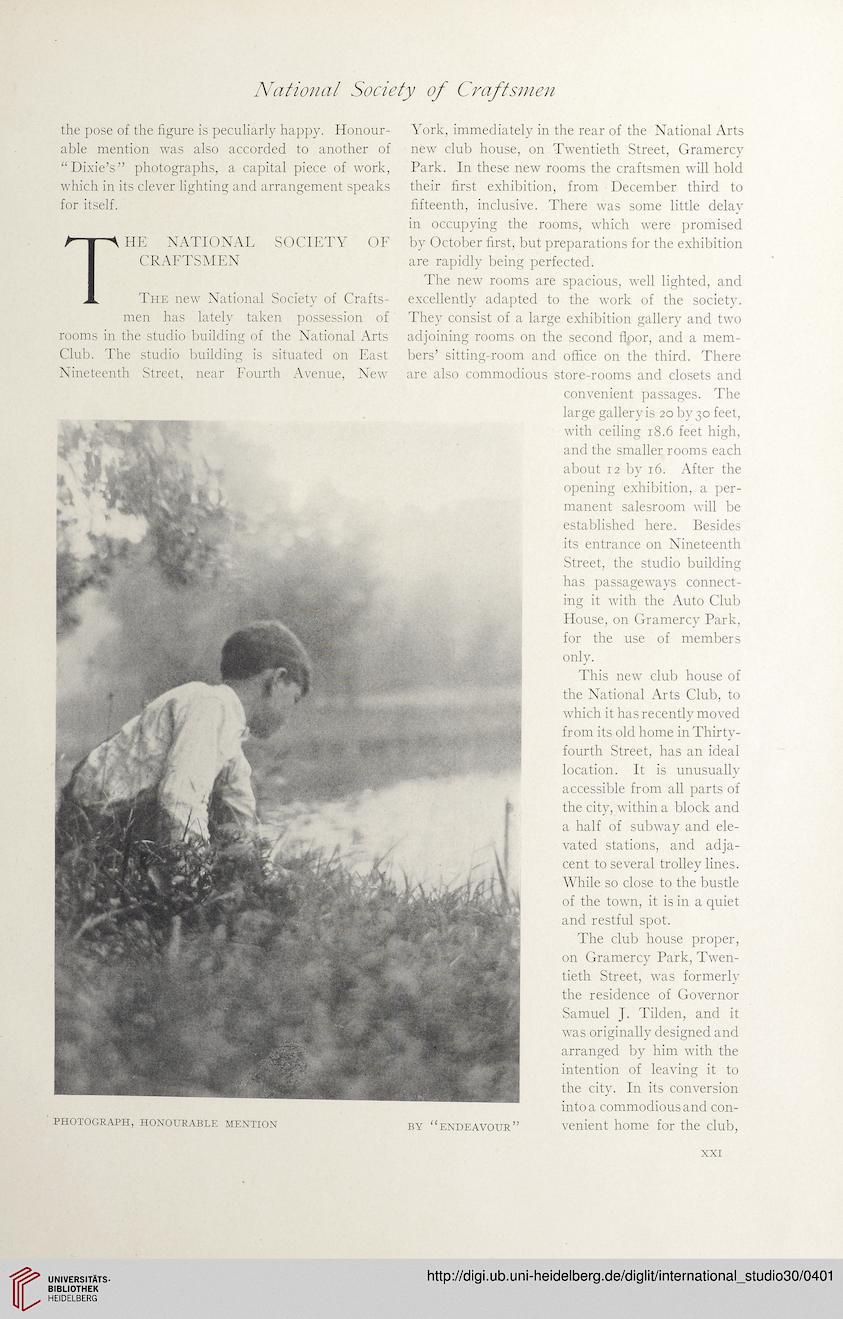 the pose of the figure is peculiarly happy. Honour-
able mention was also accorded to another of
“Dixie’s” photographs, a capital piece of work,
which in its clever lighting and arrangement speaks
for itself.

THE NATIONAL SOCIETY OF
The new National Society of Crafts-
men has lately taken possession of
rooms in the studio building of the National Arts
Club. The studio building is situated on East
Nineteenth Street, near Fourth Avenue, New

York, immediately in the rear of the National Arts
new club house, on Twentieth Street, Gramercy
Park. In these new rooms the craftsmen will hold
their first exhibition, from December third to
fifteenth, inclusive. There was some little delay
in occupying the rooms, which were promised
by October first, but preparations for the exhibition
are rapidly being perfected.
The new rooms are spacious, well lighted, and
excellently adapted to the work of the society.
They consist of a large exhibition gallery and two
adjoining rooms on the second floor, and a mem-
bers’ sitting-room and office on the third. There
are also commodious store-rooms and closets and
convenient passages. The
large gallery is 20 by 30 feet,
with ceiling 18.6 feet high,
and the smaller rooms each
about 12 by 16. After the
opening exhibition, a per-
manent salesroom will be
established here. Besides
its entrance on Nineteenth
Street, the studio building
has passageways connect-
ing it with the Auto Club
House, on Gramercy Park,
for the use of members
only.
This new club house of
the National Arts Club, to
which it has recently moved
from its old home in Thirty-
fourth Street, has an ideal
location. It is unusually
accessible from all parts of
the city, within a block and
a half of subway and ele-
vated stations, and adja-
cent to several trolley lines.
While so close to the bustle
of the town, it is in a quiet
and restful spot.
The club house proper,
on Gramercy Park, Twen-
tieth Street, was formerly
the residence of Governor
Samuel J. Tilden, and it
was originally designed and
arranged by him with the
intention of leaving it to
the city. In its conversion
into a commodious and con-
by “endeavour” venient home for the club,