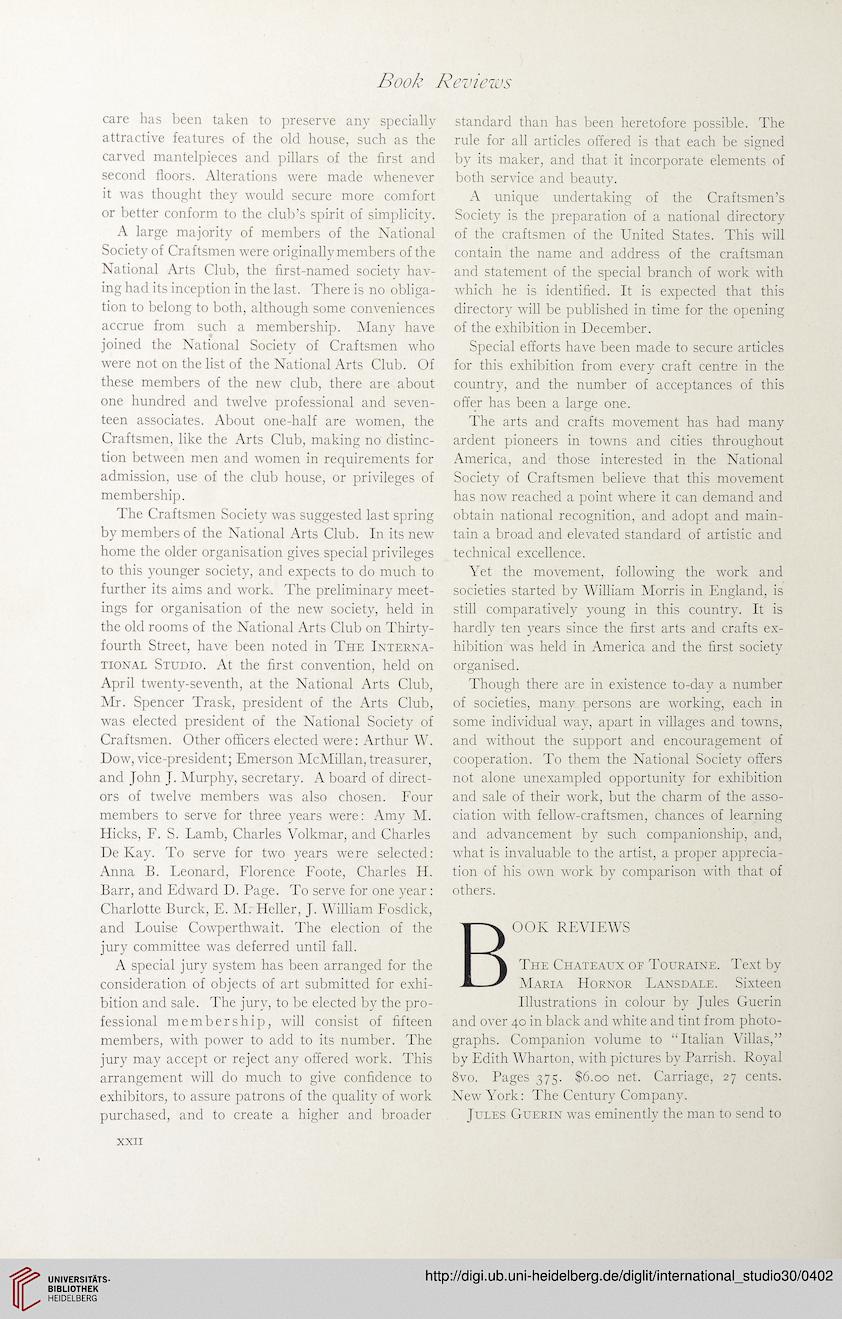 care has been taken to preserve any specially
attractive features of the old house, such as the
carved mantelpieces and pillars of the first and
second floors. Alterations were made whenever
it was thought they would secure more comfort
or better conform to the club’s spirit of simplicity.
A large majority of members of the National
Society of Craftsmen were originally members of the
National Arts Club, the first-named society hav-
ing had its inception in the last. There is no obliga-
tion to belong to both, although some conveniences
accrue from such a membership. Many have
joined the National Society of Craftsmen who
were not on the list of the National Arts Club. Of
these members of the new club, there are about
one hundred and twelve professional and seven-
teen associates. About one-half are women, the
Craftsmen, like the Arts Club, making no distinc-
tion between men and women in requirements for
admission, use of the club house, or privileges of
membership.
The Craftsmen Society was suggested last spring
by members of the National Arts Club. In its new
home the older organisation gives special privileges
to this younger society, and expects to do much to
further its aims and work. The preliminary meet-
ings for organisation of the new society, held in
the old rooms of the National Arts Club on Thirty-
fourth Street, have been noted in The Interna-
tional Studio. At the first convention, held on
April twenty-seventh, at the National Arts Club,
Mr. Spencer Trask, president of the Arts Club,
was elected president of the National Society of
Craftsmen. Other officers elected were: Arthur W.
Dow, vice-president; Emerson McMillan,treasurer,
and John J. Murphy, secretary. A board of direct-
ors of twelve members was also chosen. Four
members to serve for three years were: Amy M.
Hicks, F. S. Famb, Charles Volkmar, and Charles
De Kay. To serve for two years were selected:
Anna B. Feonard, Florence Foote, Charles H.
Barr, and Edward D. Page. To serve for one year:
Charlotte Burck, E. M. Heller, J. William Fosdick,
and Fouise Cowperthwait. The election of the
jury committee was deferred until fall.
A special jury system has been arranged for the
consideration of objects of art submitted for exhi-
bition and sale. The jury, to be elected by the pro-
fessional membership, will consist of fifteen
members, with power to add to its number. The
jury may accept or reject any offered work. This
arrangement will do much to give confidence to
exhibitors, to assure patrons of the quality of work
purchased, and to create a higher and broader

standard than has been heretofore possible. The
rule for all articles offered is that each be signed
by its maker, and that it incorporate elements of
both service and beauty.
A unique undertaking of the Craftsmen’s
Society is the preparation of a national directory
of the craftsmen of the United States. This will
contain the name and address of the craftsman
and statement of the special branch of work with
which he is identified. It is expected that this
directory will be published in time for the opening
of the exhibition in December.
Special efforts have been made to secure articles
for this exhibition from every craft centre in the
country, and the number of acceptances of this
offer has been a large one.
The arts and crafts movement has had many
ardent pioneers in towns and cities throughout
America, and those interested in the National
Society of Craftsmen believe that this movement
has now reached a point where it can demand and
obtain national recognition, and adopt and main-
tain a broad and elevated standard of artistic and
technical excellence.
Yet the movement, following the work and
societies started by William Morris in England, is
still comparatively young in this country. It is
hardly ten years since the first arts and crafts ex-
hibition was held in America and the first society
organised.
Though there are in existence to-day a number
of societies, many persons are working, each in
some individual way, apart in villages and towns,
and without the support and encouragement of
cooperation. To them the National Society offers
not alone unexampled opportunity for exhibition
and sale of their work, but the charm of the asso-
ciation with fellow-craftsmen, chances of learning
and advancement by such companionship, and,
what is invaluable to the artist, a proper apprecia-
tion of his own work by comparison with that of
others.

Book reviews
The Chateaux oe Touraine. Text by
Maria Hornor Fansdale. Sixteen
Illustrations in colour by Jules Guerin
and over 40 in black and white and tint from photo-
graphs. Companion volume to “Italian Villas,”
by Edith Wharton, with pictures by Parrish. Royal
8vo. Pages 375. $6.00 net. Carriage, 27 cents.
New York: The Century Company.
Jules Guerin was eminently the man to send to