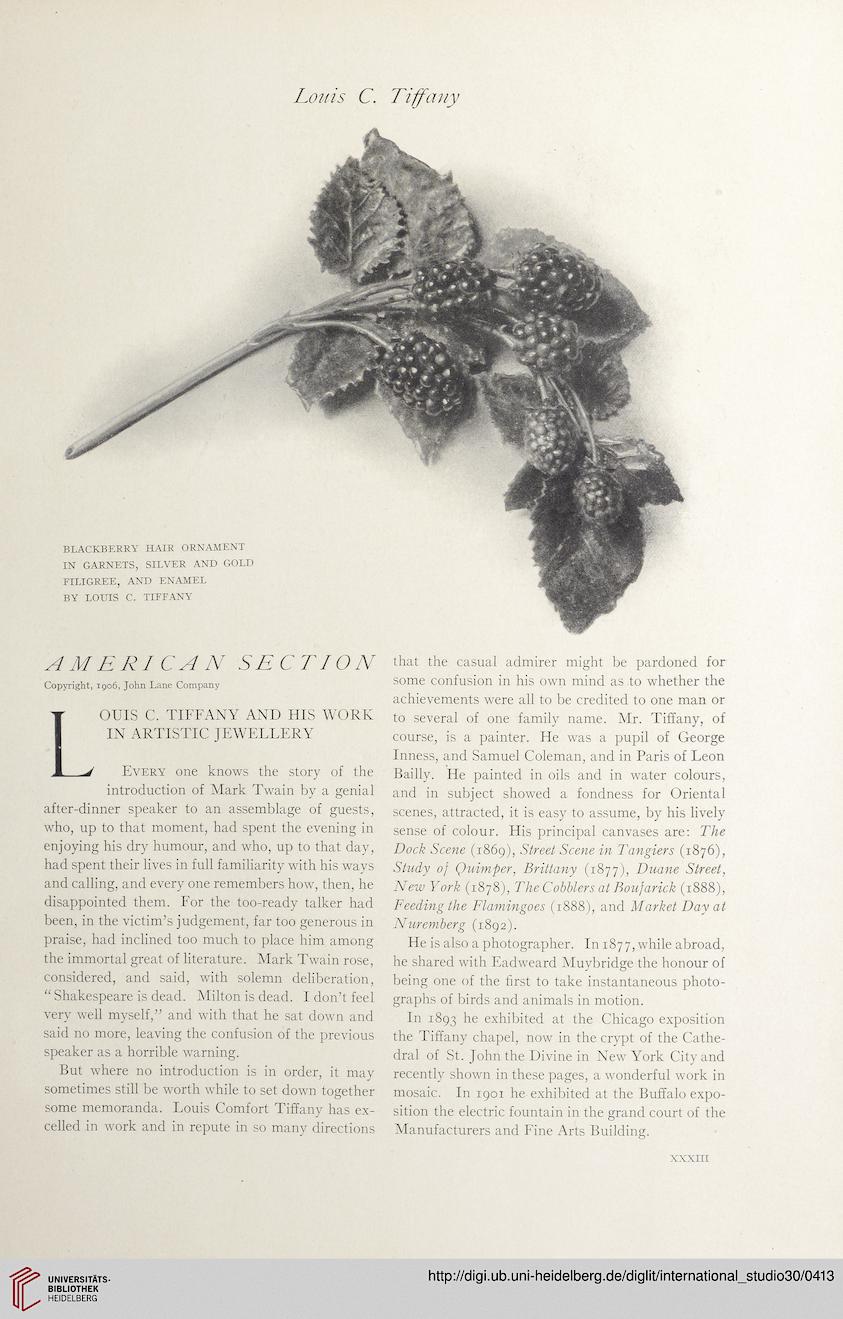 OUIS C. TIFFANY AND HIS WORK
IN ARTISTIC JEWELLERY

Every one knows the story of the
introduction of Mark Twain by a genial
after-dinner speaker to an assemblage of guests,
who, up to that moment, had spent the evening in
enjoying his dry humour, and who, up to that day,
had spent their lives in full familiarity with his ways
and calling, and every one remembers how, then, he
disappointed them. For the too-ready talker had
been, in the victim’s judgement, far too generous in
praise, had inclined too much to place him among
the immortal great of literature. Mark Twain rose,
considered, and said, with solemn deliberation,
“ Shakespeare is dead. Milton is dead. I don’t feel
very well myself,” and with that he sat down and
said no more, leaving the confusion of the previous
speaker as a horrible warning.
But where no introduction is in order, it may
sometimes still be worth while to set down together
some memoranda. Louis Comfort Tiffany has ex-
celled in work and in repute in so many directions

that the casual admirer might be pardoned for
some confusion in his own mind as to whether the
achievements were all to be credited to one man or
to several of one family name. Mr. Tiffany, of
course, is a painter. He was a pupil of George
Inness, and Samuel Coleman, and in Paris of Leon
Badly. He painted in oils and in water colours,
and in subject showed a fondness for Oriental
scenes, attracted, it is easy to assume, by his lively
sense of colour. His principal canvases are: The
Dock Scene (1869), Street Scene in Tangiers (1876),
Study of Quimper, Brittany (1877), Duane Street,
New York (1878), The Cobblers at Boufarick (1888),
Feeding the Flamingoes (1888), and Market Day at
Nuremberg (1892).
He is also a photographer. In 1877, while abroad,
he shared with Eadweard Muybridge the honour of
being one of the first to take instantaneous photo-
graphs of birds and animals in motion.
In 1893 he exhibited at the Chicago exposition
the Tiffany chapel, now in the crypt of the Cathe-
dral of St. John the Divine in New York City and
recently shown in these pages, a wonderful work in
mosaic. In 1901 he exhibited at the Buffalo expo-
sition the electric fountain in the grand court of the
Manufacturers and Fine Arts Building.