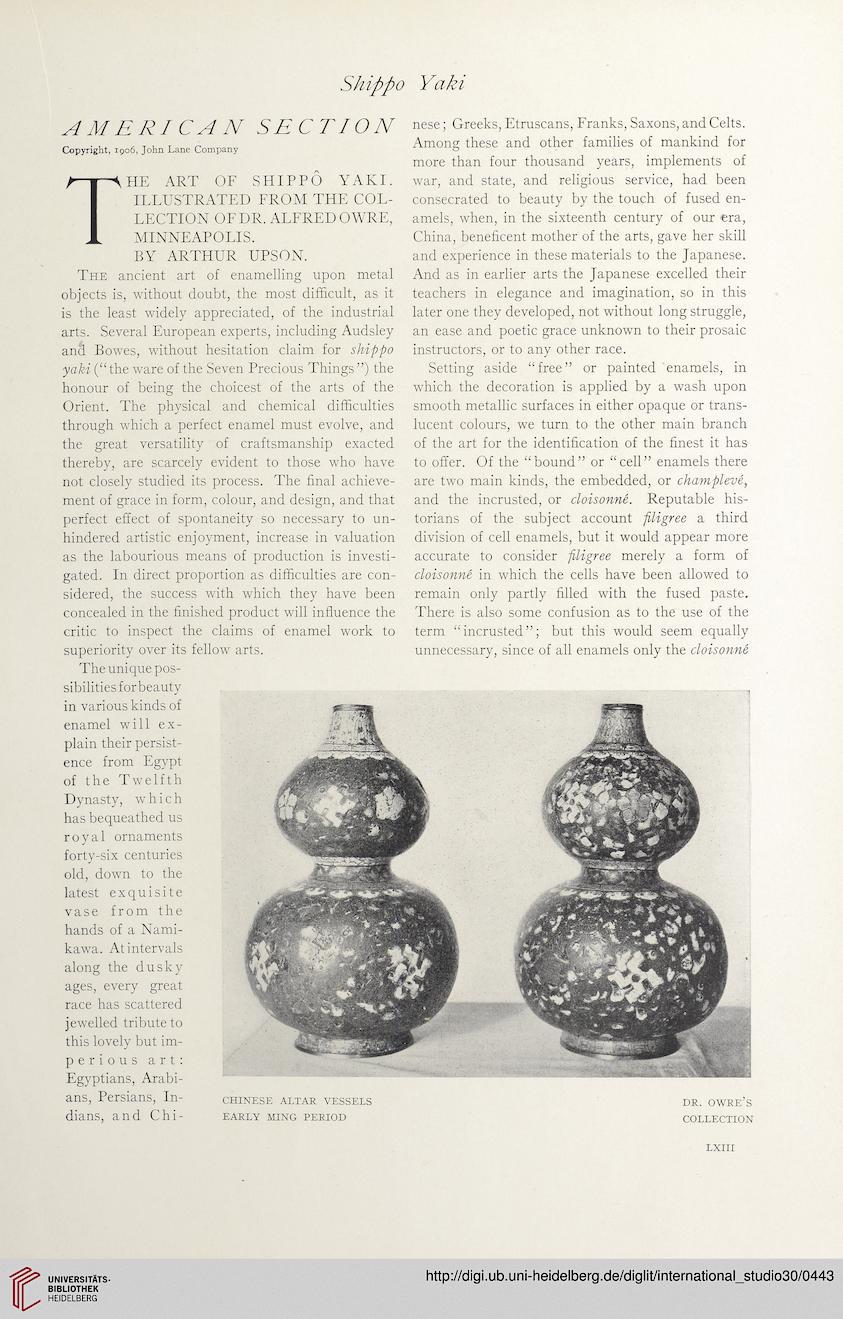 AMERICAN SECTION
Copyright, 1906, John Lane Company
The art of shippo yaki.
ILLUSTRATED FROM THE COL-
LECTION OF DR. ALFRED OWRE,
MINNEAPOLIS.
BY ARTHUR UPSON.
The ancient art of enamelling upon metal
objects is, without doubt, the most difficult, as it
is the least widely appreciated, of the industrial
arts. Several European experts, including Audsley
and Bowes, without hesitation claim for shippo
yaki ("the ware of the Seven Precious Things”) the
honour of being the choicest of the arts of the
Orient. The physical and chemical difficulties
through which a perfect enamel must evolve, and
the great versatility of craftsmanship exacted
thereby, are scarcely evident to those who have
not closely studied its process. The final achieve-
ment of grace in form, colour, and design, and that
perfect effect of spontaneity so necessary to un-
hindered artistic enjoyment, increase in valuation
as the labourious means of production is investi-
gated. In direct proportion as difficulties are con-
sidered, the success with which they have been
concealed in the finished product will influence the
critic to inspect the claims of enamel work to
superiority over its fellow arts.
The unique pos-
sibilities for beauty
in various kinds of
enamel will ex-
plain their persist-
ence from Egypt
of the Twelfth
Dynasty, which
has bequeathed us
royal ornaments
forty-six centuries
old, down to the
latest exquisite
vase from the
hands of a Nami-
kawa. At intervals
along the dusky
ages, every great
race has scattered
jewelled tribute to
this lovely but im-
perious art:
Egyptians, Arabi-
ans, Persians, In-
dians, and Chi-

nese ; Greeks, Etruscans, Franks, Saxons, and Celts.
Among these and other families of mankind for
more than four thousand years, implements of
war, and state, and religious service, had been
consecrated to beauty by the touch of fused en-
amels, when, in the sixteenth century of our era,
China, beneficent mother of the arts, gave her skill
and experience in these materials to the Japanese.
And as in earlier arts the Japanese excelled their
teachers in elegance and imagination, so in this
later one they developed, not without long struggle,
an ease and poetic grace unknown to their prosaic
instructors, or to any other race.
Setting aside “free” or painted enamels, in
which the decoration is applied by a wash upon
smooth metallic surfaces in either opaque or trans-
lucent colours, we turn to the other main branch
of the art for the identification of the finest it has
to offer. Of the “bound” or “cell” enamels there
are two main kinds, the embedded, or champleve,
and the incrusted, or cloisonne. Reputable his-
torians of the subject account filigree a third
division of cell enamels, but it would appear more
accurate to consider filigree merely a form of
cloisonne in which the cells have been allowed to
remain only partly filled with the fused paste.
There is also some confusion as to the use of the
term “incrusted”; but this would seem equally
unnecessary, since of all enamels only the cloisonne