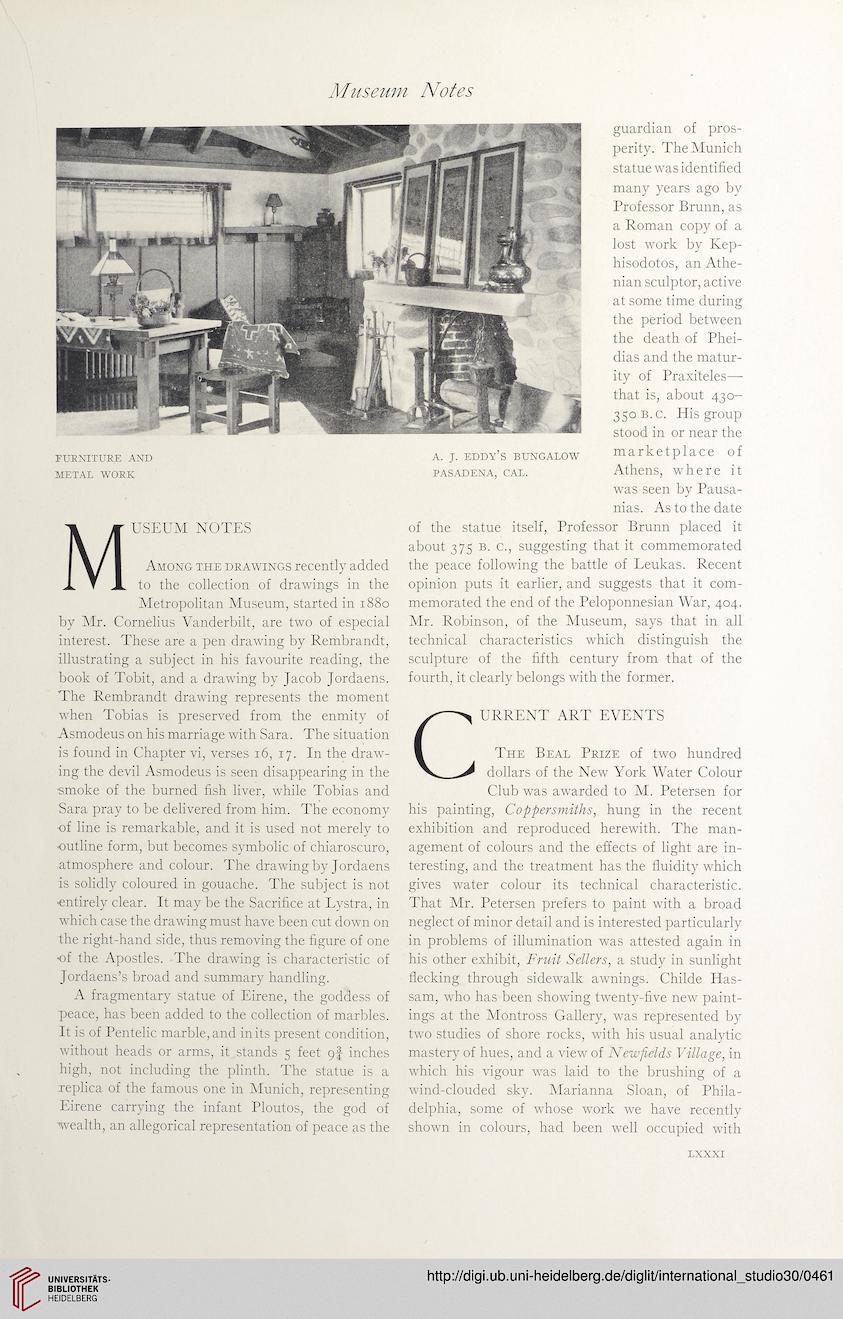 Among the drawings recently added
to the collection of drawings in the
Metropolitan Museum, started in 1880
by Mr. Cornelius Vanderbilt, are two of especial
interest. These are a pen drawing by Rembrandt,
illustrating a subject in his favourite reading, the
book of Tobit, and a drawing by Jacob Jordaens.
The Rembrandt drawing represents the moment
when Tobias is preserved from the enmity of
Asmodeus on his marriage with Sara. The situation
is found in Chapter vi, verses 16, 17. In the draw-
ing the devil Asmodeus is seen disappearing in the
smoke of the burned fish liver, while Tobias and
Sara pray to be delivered from him. The economy
of line is remarkable, and it is used not merely to
-outline form, but becomes symbolic of chiaroscuro,
atmosphere and colour. The drawing by Jordaens
is solidly coloured in gouache. The subject is not
■entirely clear. It may be the Sacrifice at Lystra, in
which case the drawing must have been cut down on
the right-hand side, thus removing the figure of one
•of the Apostles. The drawing is characteristic of
Jordaens’s broad and summary handling.
A fragmentary statue of Eirene, the goddess of
peace, has been added to the collection of marbles.
It is of Pentelic marble, and in its present condition,
without heads or arms, it stands 5 feet 9! inches
high, not including the plinth. The statue is a
replica of the famous one in Munich, representing
Eirene carrying the infant Ploutos, the god of
wealth, an allegorical representation of peace as the

guardian of pros-
perity. The Munich
statue was identified
many years ago by
Professor Brunn, as
a Roman copy of a
lost work by Kep-
hisodotos, an Athe-
nian sculptor, active
at some time during
the period between
the death of Phei-
dias and the matur-
ity of Praxiteles—-
that is, about 430-
350 B.c. His group
stood in or near the
a. j. eddy’s bungalow marketplace of
PASADENA, CAL. Athens, where it
was seen by Pausa-
nias. As to the date
of the statue itself, Professor Brunn placed it
about 375 B. c., suggesting that it commemorated
the peace following the battle of Leukas. Recent
opinion puts it earlier, and suggests that it com-
memorated the end of the Peloponnesian War, 404.
Mr. Robinson, of the Museum, says that in all
technical characteristics which distinguish the
sculpture of the fifth century from that of the
fourth, it clearly belongs with the former.

CURRENT ART EVENTS
The Beal Prize of two hundred
dollars of the New York Water Colour
Club was awarded to M. Petersen for
his painting, Coppersmiths, hung in the recent
exhibition and reproduced herewith. The man-
agement of colours and the effects of light are in-
teresting, and the treatment has the fluidity which
gives water colour its technical characteristic.
That Mr. Petersen prefers to paint with a broad
neglect of minor detail and is interested particularly
in problems of illumination was attested again in
his other exhibit, Fruit Sellers, a study in sunlight
flecking through sidewalk awnings. Childe Has-
sam, who has been showing twenty-five new paint-
ings at the Montross Gallery, was represented by
two studies of shore rocks, with his usual analytic
mastery of hues, and a view of New fields Village, in
which his vigour was laid to the brushing of a
wind-clouded sky. Marianna Sloan, of Phila-
delphia, some of whose work we have recently
shown in colours, had been well occupied with