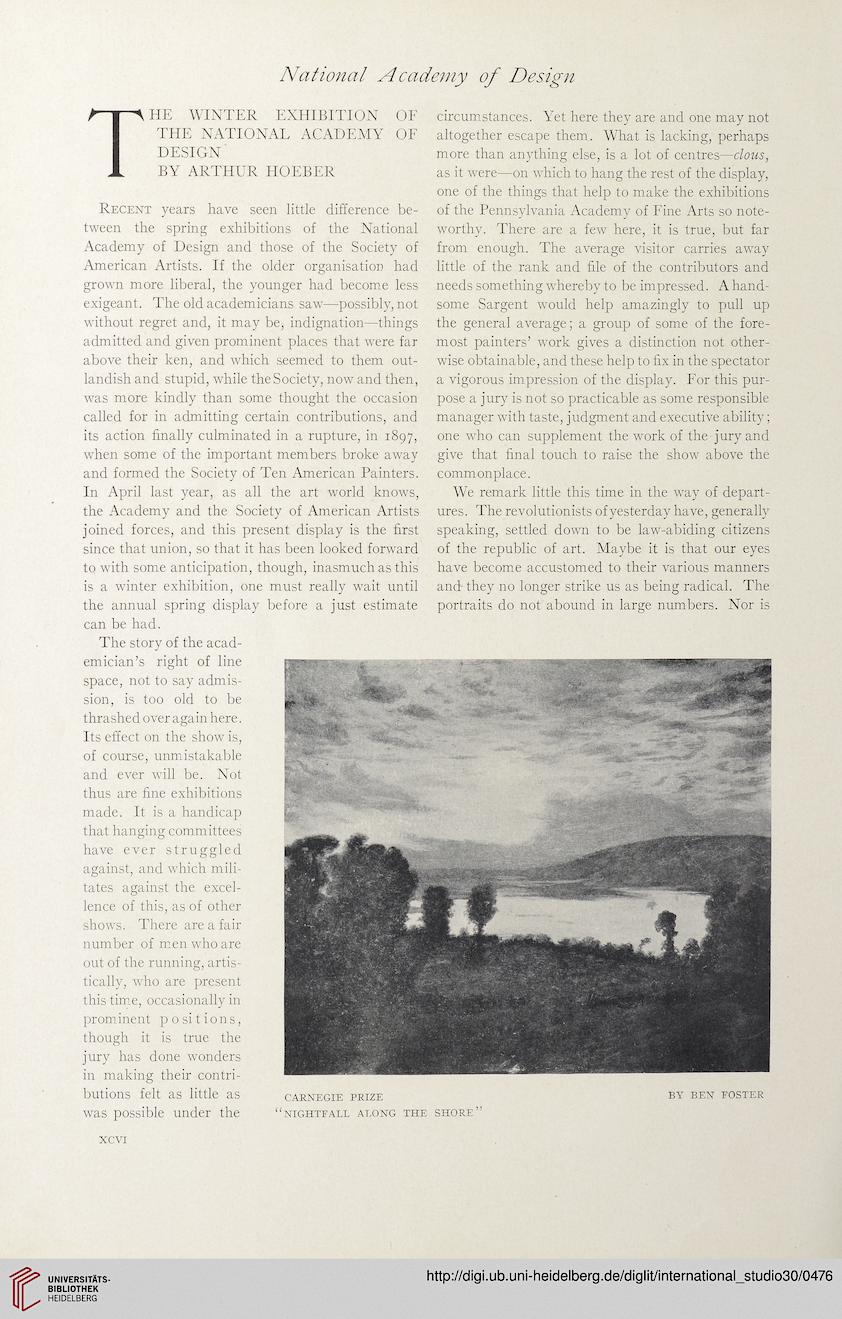 The winter exhibition of
THE NATIONAL ACADEMY OF
DESIGN
BY ARTHUR HOEBER
Recent years have seen little difference be-
tween the spring exhibitions of the National
Academy of Design and those of the Society of
American Artists. If the older organisation had
grown more liberal, the younger had become less
exigeant. The old academicians saw—possibly, not
without regret and, it may be, indignation—things
admitted and given prominent places that were far
above their ken, and which seemed to them out-
landish and stupid, while the Society, now and then,
was more kindly than some thought the occasion
called for in admitting certain contributions, and
its action finally culminated in a rupture, in 1897,
when some of the important members broke away
and formed the Society of Ten American Painters.
In April last year, as all the art world knows,
the Academy and the Society of American Artists
joined forces, and this present display is the first
since that union, so that it has been looked forward
to with some anticipation, though, inasmuch as this
is a winter exhibition, one must really wait until
the annual spring display before a just estimate
can be had.
The story of the acad-
emician’s right of line
space, not to say admis-
sion, is too old to be
thrashed over again here.
Its effect on the show is,
of course, unmistakable
and ever will be. Not
thus are fine exhibitions
made. It is a handicap
that hanging committees
have ever struggled
against, and which mili-
tates against the excel-
lence of this, as of other
shows. There are a fair
number of men who are
out of the running, artis-
tically, who are present
this time, occasionally in
prominent positions,
though it is true the
jury has done wonders
in making their contri-
butions felt as little as
was possible under the

circumstances. Yet here they are and one may not
altogether escape them. What is lacking, perhaps
more than a wishing else, is a lot of centres—clous,
as it were—on which to hang the rest of the display,
one of the things that help to make the exhibitions
of the Pennsylvania Academy of Fine Arts so note-
worthy. There are a few here, it is true, but far
from enough. The average visitor carries away
little of the rank and file of the contributors and
needs something whereby to be impressed. A hand-
some Sargent would help amazingly to pull up
the general average; a group of some of the fore-
most painters’ work gives a distinction not other-
wise obtainable, and these help to fix in the spectator
a vigorous impression of the display. For this pur-
pose a jury is not so practicable as some responsible
manager with taste, judgment and executive ability;
one who can supplement the work of the jury and
give that final touch to raise the show above the
commonplace.
We remark little this time in the way of depart-
ures. The revolutionists ofyesterday have, generally
speaking, settled down to be law-abiding citizens
of the republic of art. Maybe it is that our eyes
have become accustomed to their various manners
and they no longer strike us as being radical. The
portraits do not abound in large numbers. Nor is


CARNEGIE PRIZE BY BEN FOSTER
NIGHTFALL ALONG THE SHORE”