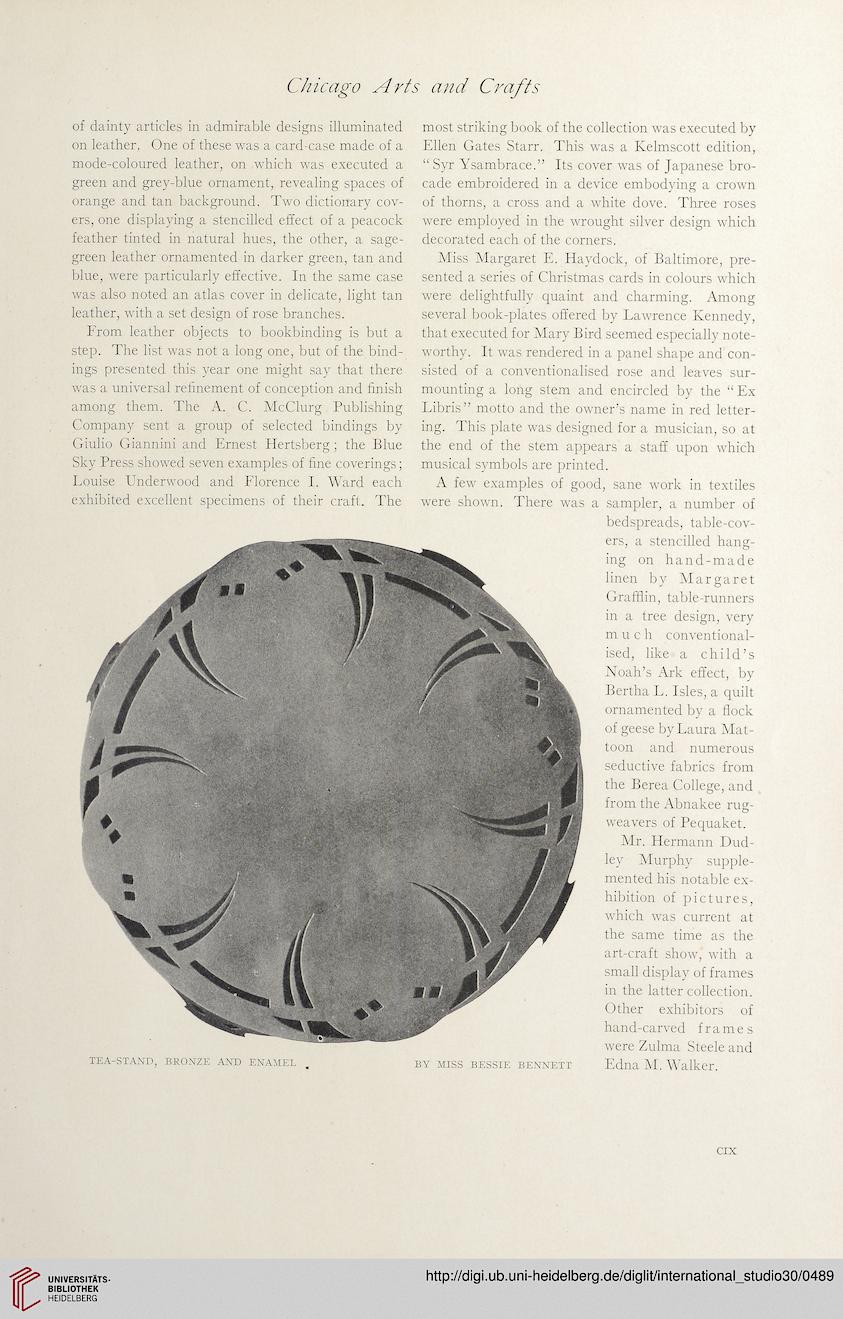 of dainty articles in admirable designs illuminated
on leather. One of these was a card-case made of a
mode-coloured leather, on which was executed a
green and grey-blue ornament, revealing spaces of
orange and tan background. Two dictionary cov-
ers, one displaying a stencilled effect of a peacock
feather tinted in natural hues, the other, a sage-
green leather ornamented in darker green, tan and
blue, were particularly effective. In the same case
was also noted an atlas cover in delicate, light tan
leather, with a set design of rose branches.
From leather objects to bookbinding is but a
step. The list was not a long one, but of the bind-
ings presented this year one might say that there
was a universal refinement of conception and finish
among them. The A. C. McClurg Publishing
Company sent a group of selected bindings by
Giulio Giannini and Ernest Hertsberg; the Blue
Sky Press showed seven examples of fine coverings;
Louise Underwood and Florence I. Ward each
exhibited excellent specimens of their craft. The

most striking book of the collection was executed by
Ellen Gates Starr. This was a Ivelmscott edition,
“Syr Ysambrace.” Its cover was of Japanese bro-
cade embroidered in a device embodying a crown
of thorns, a cross and a white dove. Three roses
were employed in the wrought silver design which
decorated each of the corners.
Miss Margaret E. Haydock, of Baltimore, pre-
sented a series of Christmas cards in colours which
were delightfully quaint and charming. Among
several book-plates offered by Lawrence Kennedy,
that executed for Mary Bird seemed especially note-
worthy. It was rendered in a panel shape and con-
sisted of a conventionalised rose and leaves sur-
mounting a long stem and encircled by the “ Ex
Libris” motto and the owner’s name in red letter-
ing. This plate was designed for a musician, so at
the end of the stem appears a staff upon which
musical symbols are printed.
A few examples of good, sane work in textiles
were shown. There was a sampler, a number of
bedspreads, table-cov-
ers, a stencilled hang-
ing on hand-made
linen by Margaret
Grafflin, table-runners
in a tree design, very
much conventional-
ised, like a child’s
Noah’s Ark effect, by
Bertha L. Isles, a quilt
ornamented by a flock
of geese by Laura Mat-
toon and numerous
seductive fabrics from
the Berea College, and
from the Abnakee rug-
weavers of Pequaket.
Mr. Hermann Dud-
ley Murphy supple-
mented his notable ex-
hibition of pictures,
which was current at
the same time as the
art-craft show, with a
small display of frames
in the latter collection.
Other exhibitors of
hand-carved frames
were Zulma Steele and
Edna M. Walker.