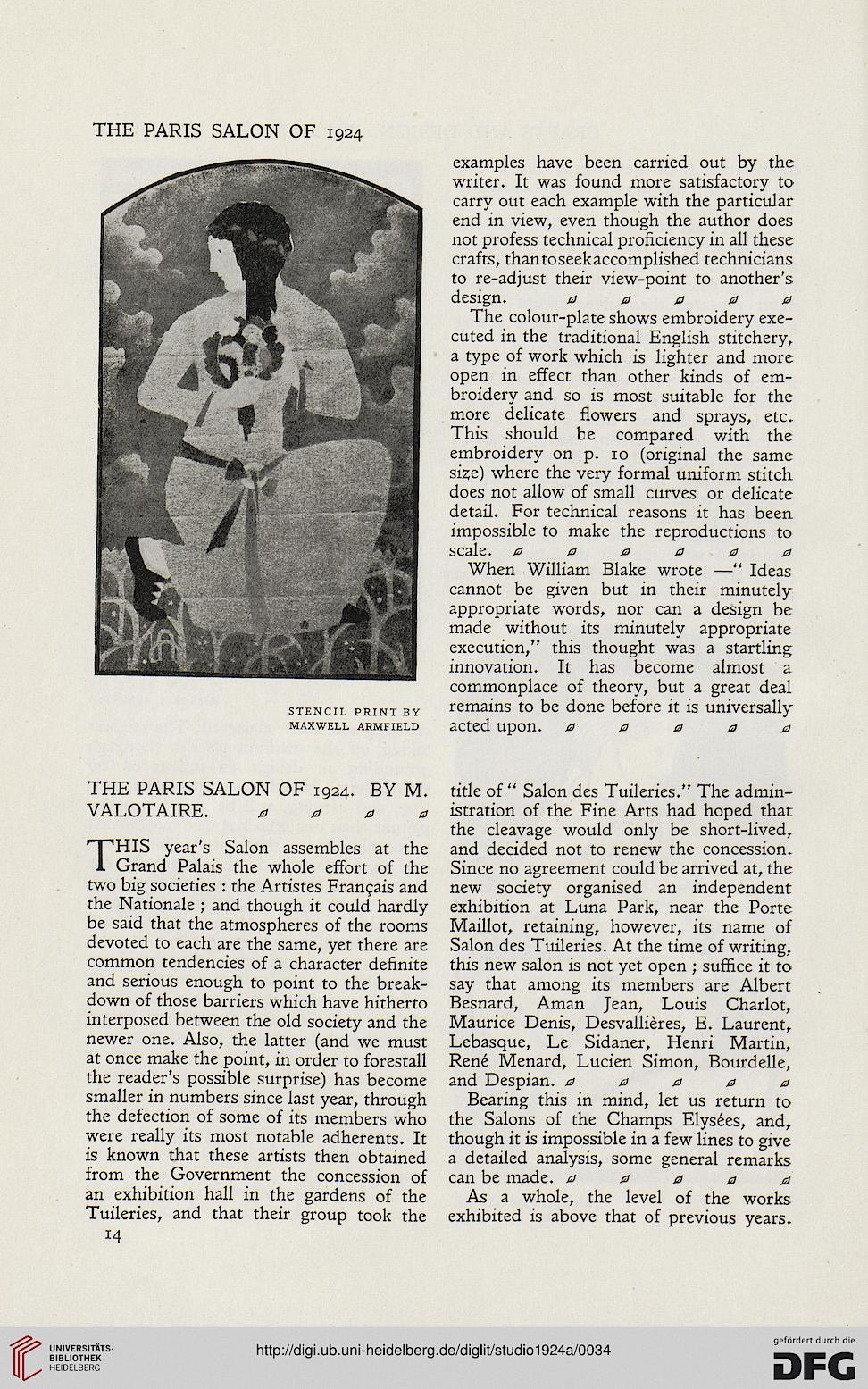 Information about OCR text
THE PARIS SALON OF 1924

THIS year's Salon assembles at the
Grand Palais the whole effort of the
two big societies : the Artistes Francais and
the Nationale ; and though it could hardly
be said that the atmospheres of the rooms
devoted to each are the same, yet there are
common tendencies of a character definite
and serious enough to point to the break-
down of those barriers which have hitherto
interposed between the old society and the
newer one. Also, the latter (and we must
at once make the point, in order to forestall
the reader's possible surprise) has become
smaller in numbers since last year, through
the defection of some of its members who
were really its most notable adherents. It
is known that these artists then obtained
from the Government the concession of
an exhibition hall in the gardens of the
Tuileries, and that their group took the
14

examples have been carried out by the
writer. It was found more satisfactory to
carry out each example with the particular
end in view, even though the author does
not profess technical proficiency in all these
crafts, thantoseekaccomplished technicians
to re-adjust their view-point to another's
design. 00000

The colour-plate shows embroidery exe-
cuted in the traditional English stitchery,
a type of work which is lighter and more
open in effect than other kinds of em-
broidery and so is most suitable for the
more delicate flowers and sprays, etc.
This should be compared with the
embroidery on p. 10 (original the same
size) where the very formal uniform stitch
does not allow of small curves or delicate
detail. For technical reasons it has been
impossible to make the reproductions to
scale. 000000

When William Blake wrote —" Ideas
cannot be given but in their minutely
appropriate words, nor can a design be
made without its minutely appropriate
execution," this thought was a startling
innovation. It has become almost a
commonplace of theory, but a great deal
remains to be done before it is universally
acted upon. 00000

title of " Salon des Tuileries." The admin-
istration of the Fine Arts had hoped that
the cleavage would only be short-lived,
and decided not to renew the concession.
Since no agreement could be arrived at, the
new society organised an independent
exhibition at Luna Park, near the Porte
Maillot, retaining, however, its name of
Salon des Tuileries. At the time of writing,
this new salon is not yet open ; suffice it to
say that among its members are Albert
Besnard, Aman Jean, Louis Chariot,
Maurice Denis, Desvallieres, E. Laurent,
Lebasque, Le Sidaner, Henri Martin,
Rene Menard, Lucien Simon, Bourdelle,
and Despian. 00000

Bearing this in mind, let us return to
the Salons of the Champs Elysees, and,
though it is impossible in a few lines to give
a detailed analysis, some general remarks
can be made. 00000

As a whole, the level of the works
exhibited is above that of previous years.