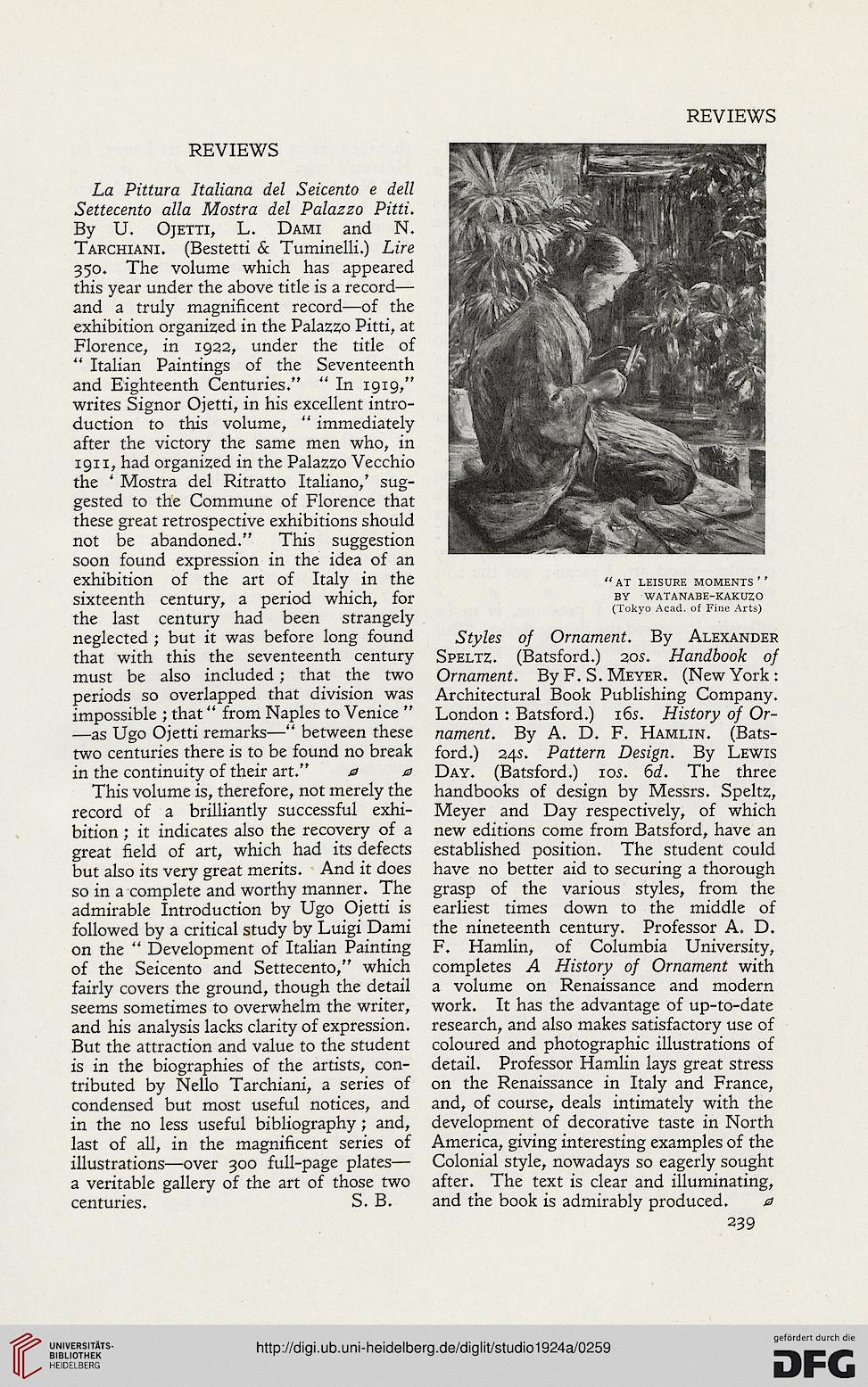 La Pittura Italiana del Seicento e dell
Settecento alia Mostra del Palazzo Pitti.
By U. Ojetti, L. Dami and N.
Tarchiani. (Bestetti & Tuminelli.) Lire
350. The volume which has appeared
this year under the above title is a record—
and a truly magnificent record—of the
exhibition organized in the Palazzo Pitti, at
Florence, in 1922, under the title of
" Italian Paintings of the Seventeenth
and Eighteenth Centuries." " In 1919,"
writes Signor Ojetti, in his excellent intro-
duction to this volume, " immediately
after the victory the same men who, in
1911, had organized in the Palazzo Vecchio
the 4 Mostra del Ritratto Italiano,' sug-
gested to the Commune of Florence that
these great retrospective exhibitions should
not be abandoned." This suggestion
soon found expression in the idea of an
exhibition of the art of Italy in the
sixteenth century, a period which, for
the last century had been strangely
neglected ; but it was before long found
that with this the seventeenth century
must be also included; that the two
periods so overlapped that division was
impossible ; that" from Naples to Venice "
—as Ugo Ojetti remarks—" between these
two centuries there is to be found no break
in the continuity of their art." a a

This volume is, therefore, not merely the
record of a brilliantly successful exhi-
bition ; it indicates also the recovery of a
great field of art, which had its defects
but also its very great merits. And it does
so in a complete and worthy manner. The
admirable Introduction by Ugo Ojetti is
followed by a critical study by Luigi Dami
on the " Development of Italian Painting
of the Seicento and Settecento," which
fairly covers the ground, though the detail
seems sometimes to overwhelm the writer,
and his analysis lacks clarity of expression.
But the attraction and value to the student
is in the biographies of the artists, con-
tributed by Nello Tarchiani, a series of
condensed but most useful notices, and
in the no less useful bibliography; and,
last of all, in the magnificent series of
illustrations—over 300 full-page plates—
a veritable gallery of the art of those two
centuries. S. B.

"AT LEISURE MOMENTS"
BY WATANABE-KAKUZO

Styles of Ornament. By Alexander
Speltz. (Batsford.) 20s. Handbook of
Ornament. By F.S.Meyer. (New York:
Architectural Book Publishing Company.
London : Batsford.) 16s. History of Or-
nament. By A. D. F. Hamlin. (Bats-
ford.) 24s. Pattern Design. By Lewis
Day. (Batsford.) 10s. 6d. The three
handbooks of design by Messrs. Speltz,
Meyer and Day respectively, of which
new editions come from Batsford, have an
established position. The student could
have no better aid to securing a thorough
grasp of the various styles, from the
earliest times down to the middle of
the nineteenth century. Professor A. D.
F. Hamlin, of Columbia University,
completes A History of Ornament with
a volume on Renaissance and modern
work. It has the advantage of up-to-date
research, and also makes satisfactory use of
coloured and photographic illustrations of
detail. Professor Hamlin lays great stress
on the Renaissance in Italy and France,
and, of course, deals intimately with the
development of decorative taste in North
America, giving interesting examples of the
Colonial style, nowadays so eagerly sought
after. The text is clear and illuminating,
and the book is admirably produced. a