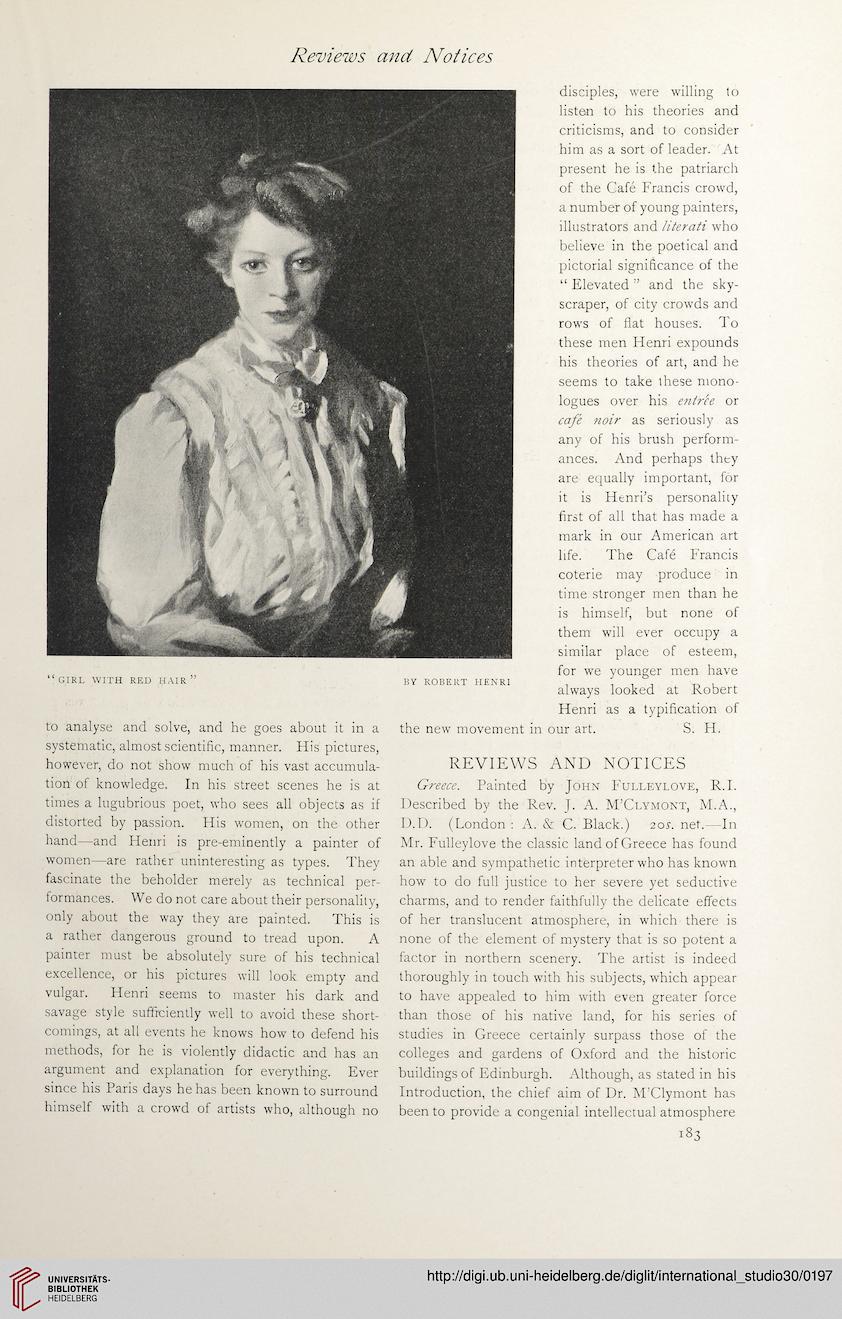 
“girl with red hair”
to analyse and solve, and he goes about it in a
systematic, almost scientific, manner. His pictures,
however, do not show much of his vast accumula-
tion of knowledge. In his street scenes he is at
times a lugubrious poet, who sees all objects as if
distorted by passion. His women, on the other
hand—and Henri is pre-eminently a painter of
women—are rather uninteresting as types. They
fascinate the beholder merely as technical per-
formances. We do not care about their personality,
only about the way they are painted. This is
a rather dangerous ground to tread upon. A
painter must be absolutely sure of his technical
excellence, or his pictures will look empty and
vulgar. Henri seems to master his dark and
savage style sufficiently well to avoid these short-
comings, at all events he knows how to defend his
methods, for he is violently didactic and has an
argument and explanation for everything. Ever
since his Paris days he has been known to surround
himself with a crowd of artists who, although no

disciples, were willing to
listen to his theories and
criticisms, and to consider
him as a sort of leader. At
present he is the patriarch
of the Cafe Francis crowd,
a number of young painters,
illustrators and literati who
believe in the poetical and
pictorial significance of the
“ Elevated ” and the sky-
scraper, of city crowds and
rows of flat houses. To
these men Henri expounds
his theories of art, and he
seems to take ihese mono-
logues over his entree or
cafe noir as seriously as
any of his brush perform-
ances. And perhaps they
are equally important, for
it is Htnri's personality
first of all that has made a
mark in our American art
life. The Cafe Francis
coterie may produce in
time stronger men than he
is himself, but none of
them will ever occupy a
similar place of esteem,
for we younger men have
always looked at Robert
Henri as a typification of
the new movement in our art. S. H.
REVIEWS AND NOTICES
Greece. Painted by John Fulleylove, R.I.
Described by the Rev. J. A. M’Clymont, M.A.,
D.D. (London : A. & C. Black.) 20s. net.—-In
Mr. Fulleylove the classic land of Greece has found
an able and sympathetic interpreter who has known
how to do full justice to her severe yet seductive
charms, and to render faithfully the delicate effects
of her translucent atmosphere, in which there is
none of the element of mystery that is so potent a
factor in northern scenery. The artist is indeed
thoroughly in touch with his subjects, which appear
to have appealed to him with even greater force
than those of his native land, for his series of
studies in Greece certainly surpass those of the
colleges and gardens of Oxford and the historic
buildings of Edinburgh. Although, as stated in his
Introduction, the chief aim of Dr. M’Clymont has
been to provide a congenial intellectual atmosphere
183