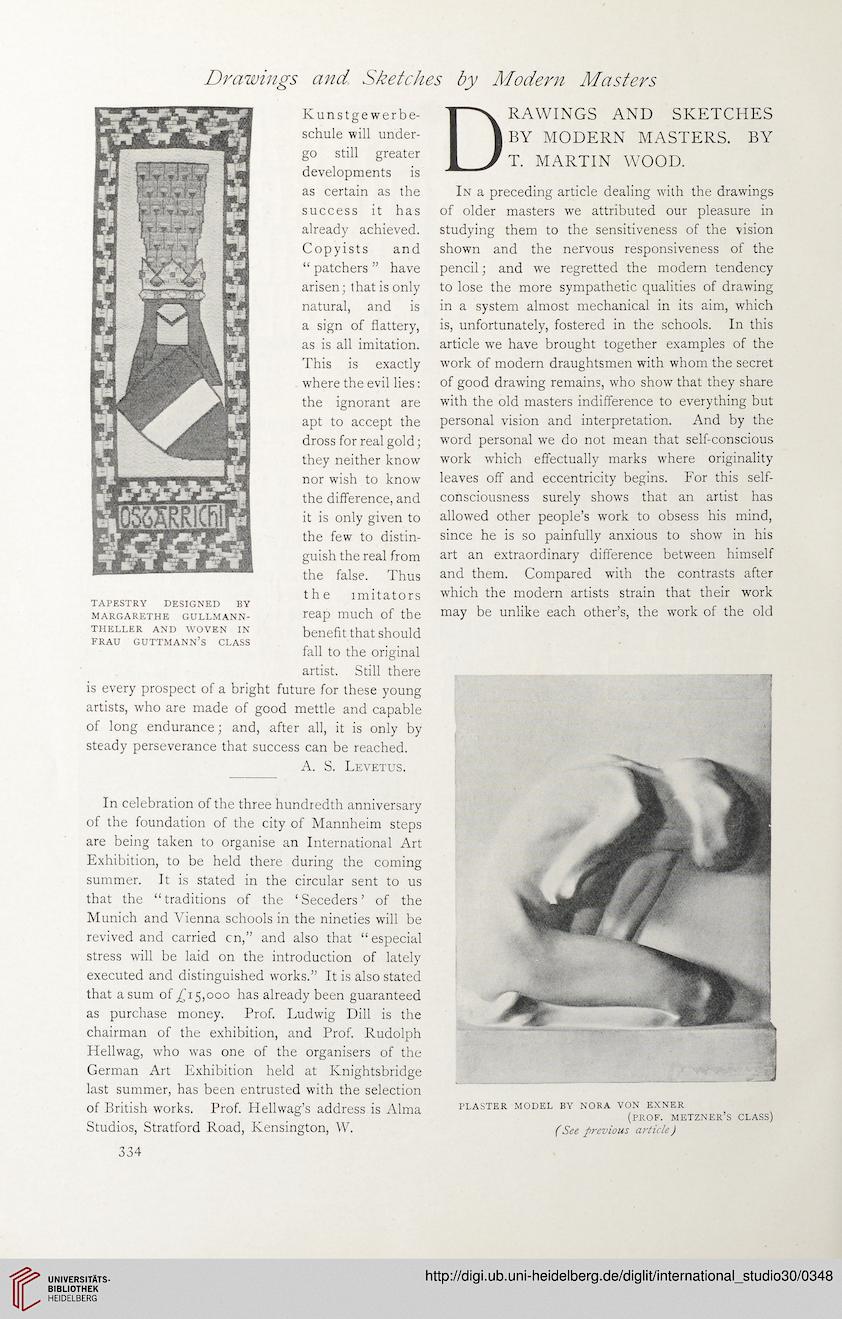 Information about OCR text
Drawings and Sketches by Modern Masters


Kunstgewerbe-
schule will under-
go still greater
developments is
as certain as the
success it has
already achieved.
Copyists and
“ patchers ” have
arisen; that is only
natural, and is
a sign of flattery,
as is all imitation.
This is exactly
where the evil lies:
the ignorant are
apt to accept the
dross for real gold;
they neither know
nor wish to know
the difference, and
it is only given to
the few to distin-
guish the real from
the false. Thus
the imitators
reap much of the
benefit that should
fall to the original
artist. Still there
is every prospect of a bright future for these young
artists, who are made of good mettle and capable
of long endurance; and, after all, it is only by
steady perseverance that success can be reached.
A. S. Levetus.

In celebration of the three hundredth anniversary
of the foundation of the city of Mannheim steps
are being taken to organise an International Art
Exhibition, to be held there during the coming
summer. It is stated in the circular sent to us
that the “traditions of the ‘ Seceders ’ of the
Munich and Vienna schools in the nineties will be
revived and carried cn,” and also that “especial
stress will be laid on the introduction of lately
executed and distinguished works.” It is also stated
that a sum of .£15,000 has already been guaranteed
as purchase money. Prof. Ludwig Dill is the
chairman of the exhibition, and Prof. Rudolph
Hellwag, who was one of the organisers of the
German Art Exhibition held at Ivnightsbridge
last summer, has been entrusted with the selection
of British works. Prof. Hellwag’s address is Alma
Studios, Stratford Road, Kensington, W.

Drawings and sketches
BY MODERN MASTERS. BY
T. MARTIN WOOD.
In a preceding article dealing with the drawings
of older masters we attributed our pleasure in
studying them to the sensitiveness of the vision
shown and the nervous responsiveness of the
pencil; and we regretted the modern tendency
to lose the more sympathetic qualities of drawing
in a system almost mechanical in its aim, which
is, unfortunately, fostered in the schools. In this
article we have brought together examples of the
work of modern draughtsmen with whom the secret
of good drawing remains, who show that they share
with the old masters indifference to everything but
personal vision and interpretation. And by the
word personal we do not mean that self-conscious
work which effectually marks where originality
leaves off and eccentricity begins. For this self-
consciousness surely shows that an artist has
allowed other people’s work to obsess his mind,
since he is so painfully anxious to show in his
art an extraordinary difference between himself
and them. Compared with the contrasts after
which the modern artists strain that their work
may be unlike each other’s, the work of the old