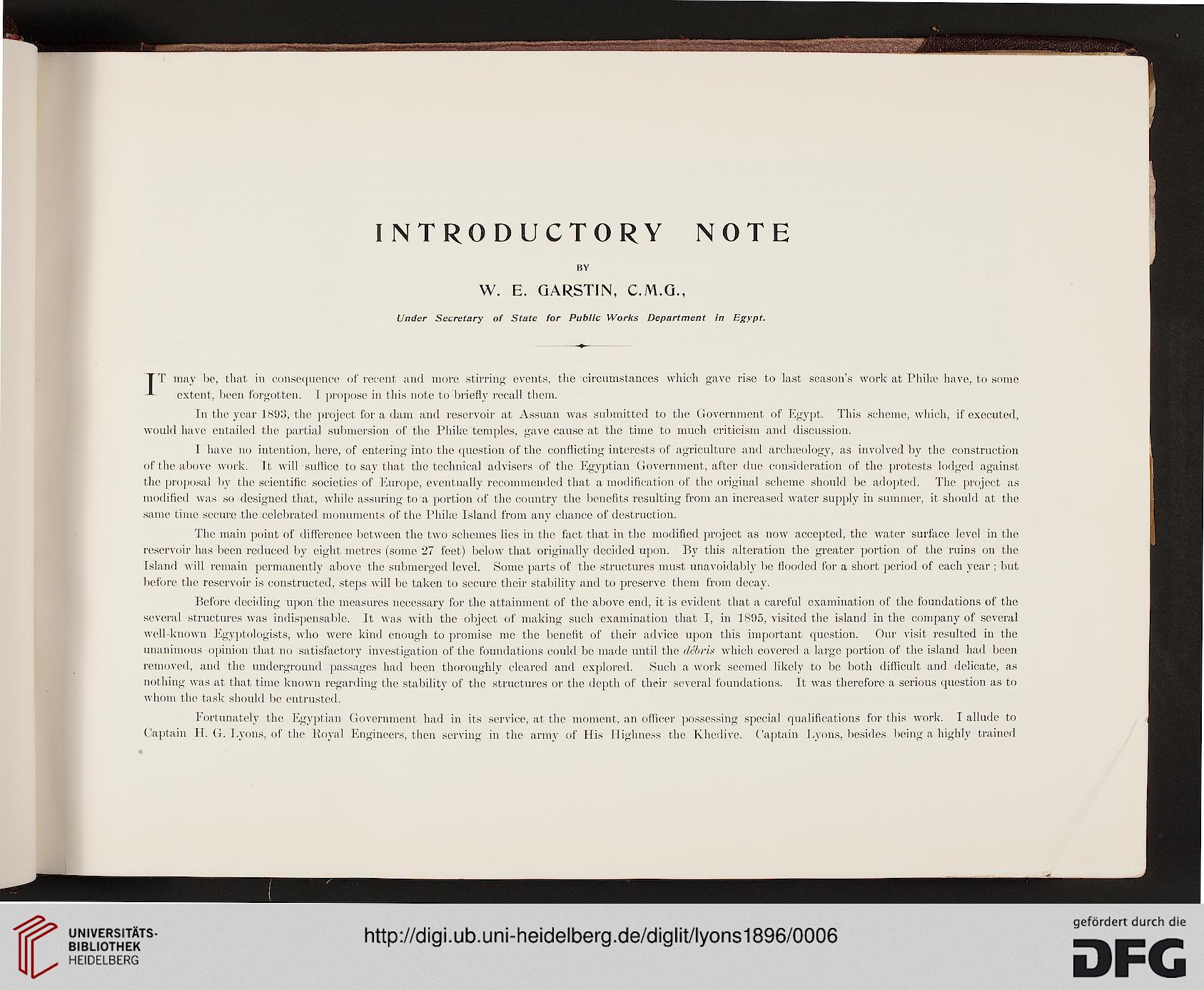 Under Secretary of State for Public Works Department in Egypt.

TT may be, that in consequence of recent and more stirring events, the circumstances which gave rise to last season's work at Philse have, to some
-■- extent, been forgotten. I propose in this note to briefly recall them.

In the year 1893, the project for a dam and reservoir at Assuan was submitted to the Government of Egypt. This scheme, which, if executed,
would have entailed the partial submersion of the Philse temples, gave cause at the time to much criticism and discussion.

1 have no intention, here, of entering into the question of the conflicting interests of agriculture and archaeology, as involved by the construction
of the above work. Tt will suffice to say that the technical advisers of the Egyptian Government, after due consideration of the protests lodged against
the proposal by the scientific societies of Europe, eventually recommended that a modification of the original scheme should be adopted. The project as
modified was so designed that, while assuring to a portion of the country the benefits resulting from an increased water supply in summer, it should at the
same time secure the celebrated monuments of the Philse Island from any chance of destruction.

The main point of difference between the two schemes lies in the fact that in the modified project as now accepted, the water surface level in the
reservoir has been reduced by eight metres (some 27 feet) below that originally decided upon. By this alteration the greater portion of the ruins on the
Island will remain permanently above the submerged level. Some parts of the structures must unavoidably be flooded for a short period of each year ; but
before the reservoir is constructed, steps will be taken to secure their stability and to preserve them from decay.

Before deciding upon the measures necessary for the attainment of the above end, it is evident that a careful examination of the foundations of the
several structures was indispensable. It was with the object of making such examination that I, in 1S95, visited the island in the company of several
welhknown Egyptologists, who were kind enough to promise me the benefit of their advice upon this important question. Our visit resulted in the
unanimous opinion that no satisfactory investigation of the foundations could be made until the debris which covered a large portion of the island had been
removed, and the underground passages had been thoroughly cleared and explored. Such a work seemed likely to be both difficult and delicate, as
nothing was at that time known regarding the stability of the structures or the depth of their several foundations. It was therefore a serious question as to
whom the task should be entrusted.

Fortunately the Egyptian Government had in its service, at the moment, an officer possessing special qualifications for this work. I allude to
Captain H. G. Lyons, of the Royal Engineers, then serving in the army of His Highness the Khedive. Captain Lyons, besides being a highly trained