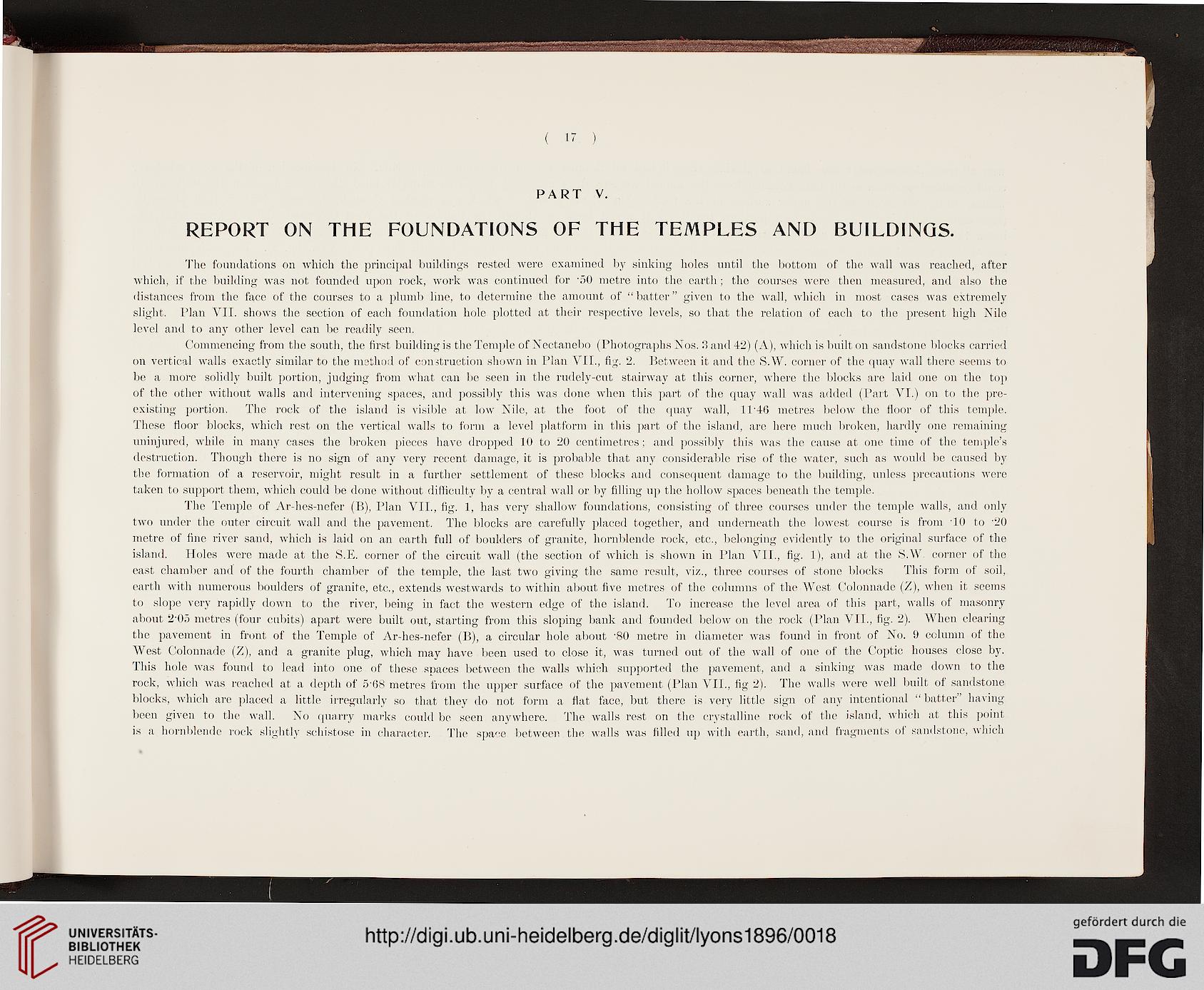 REPORT ON THE FOUNDATIONS OF THE TEMPLES AND BUILDINGS.

The foundations on which the principal buildings rested were examined by sinking holes until the bottom of the wall was reached, after
which, if the building was not founded upon rock, work was continued for '50 metre into the earth ; the courses were then measured, and also the
distances from the face of the courses to a plumb line, to determine the amount of "batter" given to the wall, which in most cases was extremely
slight. Plan VII. shows the section of each foundation hole plotted at their respective levels, so that the relation of each to the present high Nile
level and to any other level can be readily seen.

Commencing from the south, the first building is the Temple of Nectanebo (Photographs Xos.:! and 42) (A), which is built on sandstone blocks carried
on vertical walls exactly similar to the method of con-itruction shown in Plan VII., tig. 2. Between it and the S.W. corner of the quay wall there seems to
be a more solidly built portion, judging from what can be seen in the rudely-cut stairway at this corner, where the blocks are laid one on the top
of the other without walls and intervening spaces, and possibly this was done when this part of the quay wall was added (Part VI.) on to the pre-
existing portion. The rock of the island is visible at low Xile, at the foot of the quay wall, 1 1 4(> metres below the floor of this temple.
These Hoor blocks, which rest on the vertical walls to form a level platform in this part of the island, are here much broken, hardly one remaining
uninjured, while in many cases the broken pieces have dropped 10 to 20 centimetres; and possibly tin's was the cause at one time of the temple's
destruction. Though there is no sign of any very recent damage, it is probable that any considerable rise of the water, such as would be caused by
the formation of a reservoir, might result in a further settlement of these blocks and consequent damage to the building, unless precautions were
taken to support them, which could be done without difficulty by a central wall or by filling up the hollow spaces beneath the temple.

The Temple of Ar-hes-nefer (B), Plan VII., fig. 1, has very shallow foundations, consisting of three courses under the temple walls, and only
two under the outer circuit wall and the pavement. The blocks are carefully placed together, and underneath the lowest course is from TO to -20
metre of fine river sand, which is laid on an earth full of boulders of granite, hornblende rock, etc., belonging evidently to the original surface of the
island. Holes were made at the S.E. corner of the circuit wall (the section of which is shown in I Man VII., fig. 1), and at the S.W. corner of the
east chamber and of the fourth chamber of the temple, the last two giving the same result, viz., three courses of stone blocks This form of soil,
earth with numerous boulders of granite, etc., extends westwards to within about five metres of the columns of the West Colonnade (Z), when it seems
to slope very rapidly down to the river, being in fact the western edge of the island. To increase the level area of this part, walls of masonry
about 2-05 metres (four cubits) apart were built out, starting from this sloping bank and founded below on the rock (Plan VII., fig. 2). When clearing
the pavement in front of the Temple of Ardies-nefer (B), a circular hole about '80 metre in diameter was found in front of Xo. 9 column of the
West Colonnade (Z), and a granite plug, which may have been used to close it, was turned out of the wall of one of the Coptic houses close by.
This hole was found to lead into one of these spaces between the walls which supported the pavement, and a sinking was made down to the
rock, which was reached at a depth of 5"68 metres from the upper surface of the pavement (Plan VII., fig 2). The walls were well built of sandstone
blocks, which are placed a little irregularly so that they do not form a Mat face, but there is very little sign of any intentional "batter" having
been given to the wall. Xo quarry marks could be seen anywhere. The walls rest on the crystalline rock of the island, which at this point
is a hornblende rock slightly schistose in character. The space between the walls was filled up with earth, sand, and fragments of sandstone, which