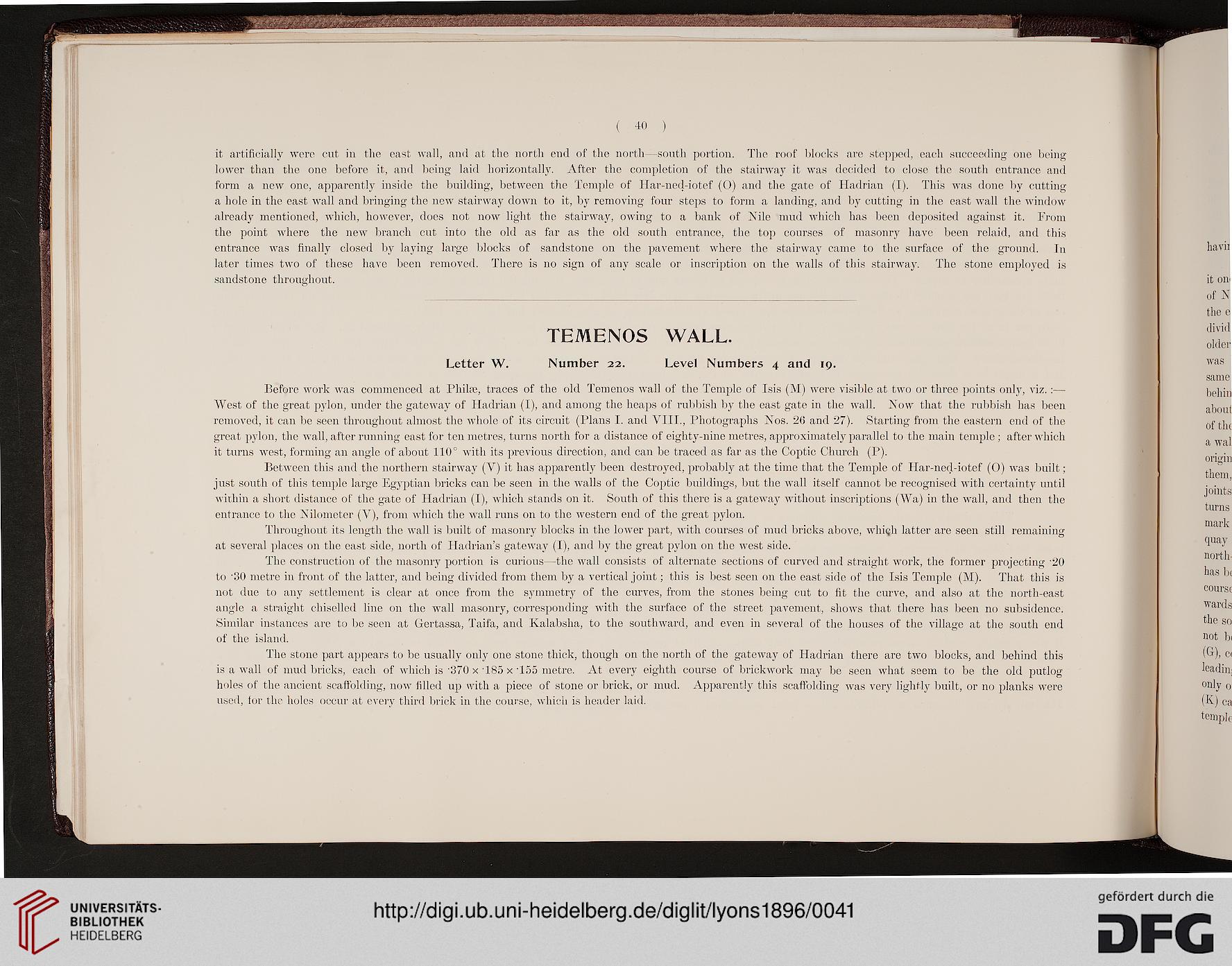 it artificially were cut in the east wall, and at the north end of the north—south portion. The roof blocks are stepped, each succeeding one being
lower than the one before it, and being laid horizontally. After the completion of the stairway it was decided to close the south entrance and
form a new one, apparently inside the building, between the Temple of llar-ned-iotef (O) and the gate of Hadrian (I). This was done by cutting
a hole in the east wall and bringing the new stairway down to it, by removing four steps to form a landing, and by cutting in the east wall the window-
already mentioned, which, however, does not now light the stairway, owing to a bank of Nile mud which has been deposited against it. From
the point where the new branch cut into the old as far as the old south entrance, the top courses of masonry have been relaid, and this
entrance was finally closed by laying large blocks of sandstone on the pavement where the stairway came to the surface of the ground. In
later times two of these have been removed. There is no sign of any scale or inscription on the walls of this stairway. The stone employed is
sandstone throughout.

Before work was commenced at Philse, traces of the old Temenos wall of the Temple of Isis (M) were visible at two or three points only, viz. :—
West of the great pylon, under the gateway of Hadrian (I), and among the heaps of rubbish by the east gate in the wall. Now that the rubbish has been
removed, it can be seen throughout almost the whole of its circuit (Plans I. and VIII., Photographs Nos. 26 and 27). Starting from the eastern end of the
great pylon, the wall, after running east for ten metres, turns north for a distance of eighty-nine metres, approximately parallel to the main temple ; after which
it turns west, forming an angle of about 110° with its previous direction, and can be traced as far as the Coptic Church (P).

Between this and the northern stairway (V) it has apparently been destroyed, probably at the time that the Temple of Har-ned-iotef (O) was built;
just south of this temple large Egyptian bricks can be seen in the walls of the Coptic buildings, but the wall itself cannot be recognised with certainty until
within a short distance of the gate of Hadrian (I), which stands on it. South of this there is a gateway without inscriptions (Wa) in the wall, and then the
entrance to the Xilometer (V), from which the wall runs on to the western end of the great pylon.

Throughout its length the wall is built of masonry blocks in the lower part, with courses of mud bricks above, whigh latter are seen still remaining
at several places on the east side, north of Hadrian's gateway (I), and by the great pylon on the west side.

The construction of the masonry portion is curious—the wall consists of alternate sections of curved and straight work, the former projecting '20
to '30 metre in front of the latter, and being divided from them by a vertical joint; this is best seen on the east side of the Isis Temple (M). That this is
not due to any settlement is clear at once from the symmetry of the curves, from the stones being cut to fit the curve, and also at the north-east
angle a straight chiselled line on the wall masonry, corresponding with the surface of the street pavement, shows that there has been no subsidence.
Similar instances are to be seen at Gertassa, Taifa, and Kalabsha, to the southward, and even in several of the houses of the village at the south end
of the island.

The stone part appears to be usually only one stone thick, though on the north of the gateway of Hadrian there are two blocks, and behind this
is a wall of mud bricks, each of which is-370 x-185 x T55 metre. At every eighth course of brickwork may be seen what seem to be the old putlog
holes of the ancient scaffolding, now filled up with a piece of stone or brick, or mud. Apparently this scaffolding was very lightly built, or no planks were
used, lor the holes occur at every third brick in the course, which is header laid.