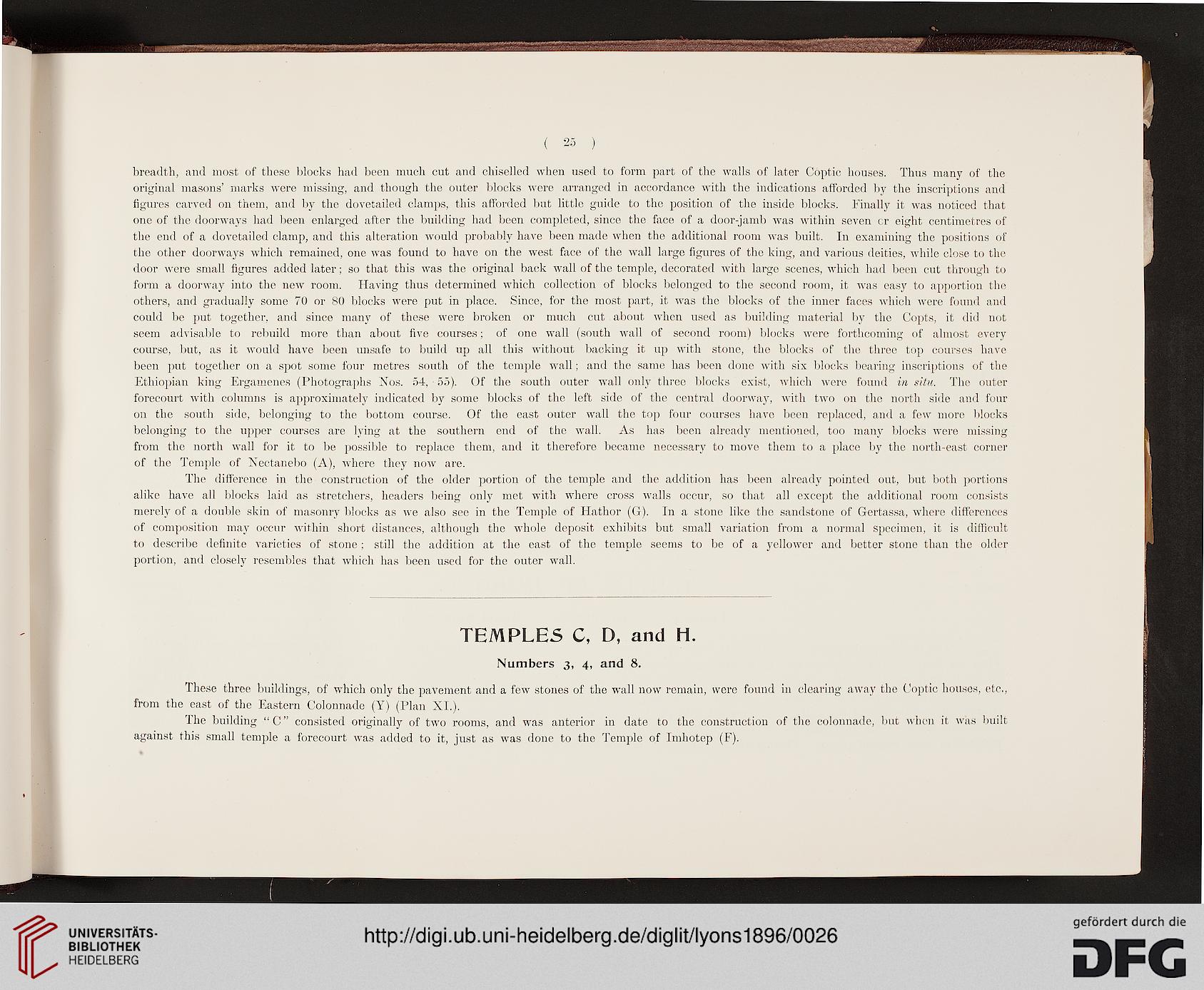 breadth, and most of those blocks had been much cut and chiselled when used to form part of the walls of later Coptic houses. Thus many of the
original masons' marks were missing, and though the outer blocks were arranged in accordance with the indications afforded by the inscriptions and
figures carved on them, and by the dovetailed clamps, this afforded but little guide to the position of the inside blocks. Finally it was noticed that
one of the doorways had been enlarged after the building had been completed, since the face of a door-jamb was within seven cr eight centimetres of
the end of a dovetailed clamp, and this alteration would probably have been made when the additional room was built. In examining the positions of
the other doorways which remained, one was found to have on the west face of the wall large figures of the king, and various deities, while close to the
door were small figures added later; so that this was the original back wall of the temple, decorated with large scenes, which had been cut through to
form a doorway into the new room. Having thus determined which collection of blocks belonged to the second room, it was easy to apportion the
others, and gradually some 70 or 80 blocks were put in place. Since, for the most part, it was the blocks of the inner faces which were found and
could be put together, and since many of these were broken or much cut about when used as building material by the Copts, it did not
seem advisable to rebuild more than about five courses; of one wall (south wall of second room) blocks were forthcoming of almost every
course, but, as it would have been unsafe to build up all this without backing it up with stone, the blocks of the three top courses have
been put together on a spot some four metres south of the temple wall; and the same has been done with six blocks hearing inscriptions of the
Ethiopian king Ergamenes (Photographs Nos. 54, 55). Of the south outer wall only three blocks exist, which were found in situ. The outer
forecourt with columns is approximately indicated by some blocks of the left side of the central doorway, with two on the north side and four
on the south side, belonging to the bottom course. Of the east outer wall the top four courses have been replaced, and a few more blocks
belonging to the upper courses are lying at the southern end of the wall. As has been already mentioned, too many blocks were missing
from the north wall for it to be possible to replace them, and it therefore became necessary to move them to a place by the north-east corner
of the Temple of Xectanebo (A), where they now are.

The difference in the construction of the older portion of the temple and the addition has been already pointed out, but both portions
alike have all blocks laid as stretchers, headers being only met with where cross walls occur, so that all except the additional room consists
merely of a double skin of masonry blocks as we also see in the Temple of Hathor (G). In a stone like the sandstone of Gertassa, where differences
of composition may occur within short distances, although the whole deposit exhibits but small variation from a normal specimen, it is difficult
to describe definite varieties of stone ; still the addition at the east of the temple seems to be of a yellower and better stone than the older
portion, and closely resembles that which has been used for the outer wall.

These three buildings, of which only the pavement and a few stones of the wall now remain, were found in clearing away the Coptic houses, etc.,
from the east of the Eastern Colonnade (Y) (Plan XL).

The building "C" consisted originally of two rooms, and was anterior in date to the construction of the colonnade, but when it was built
against this small temple a forecourt was added to it, just as was done to the Temple of Imhotep (F).