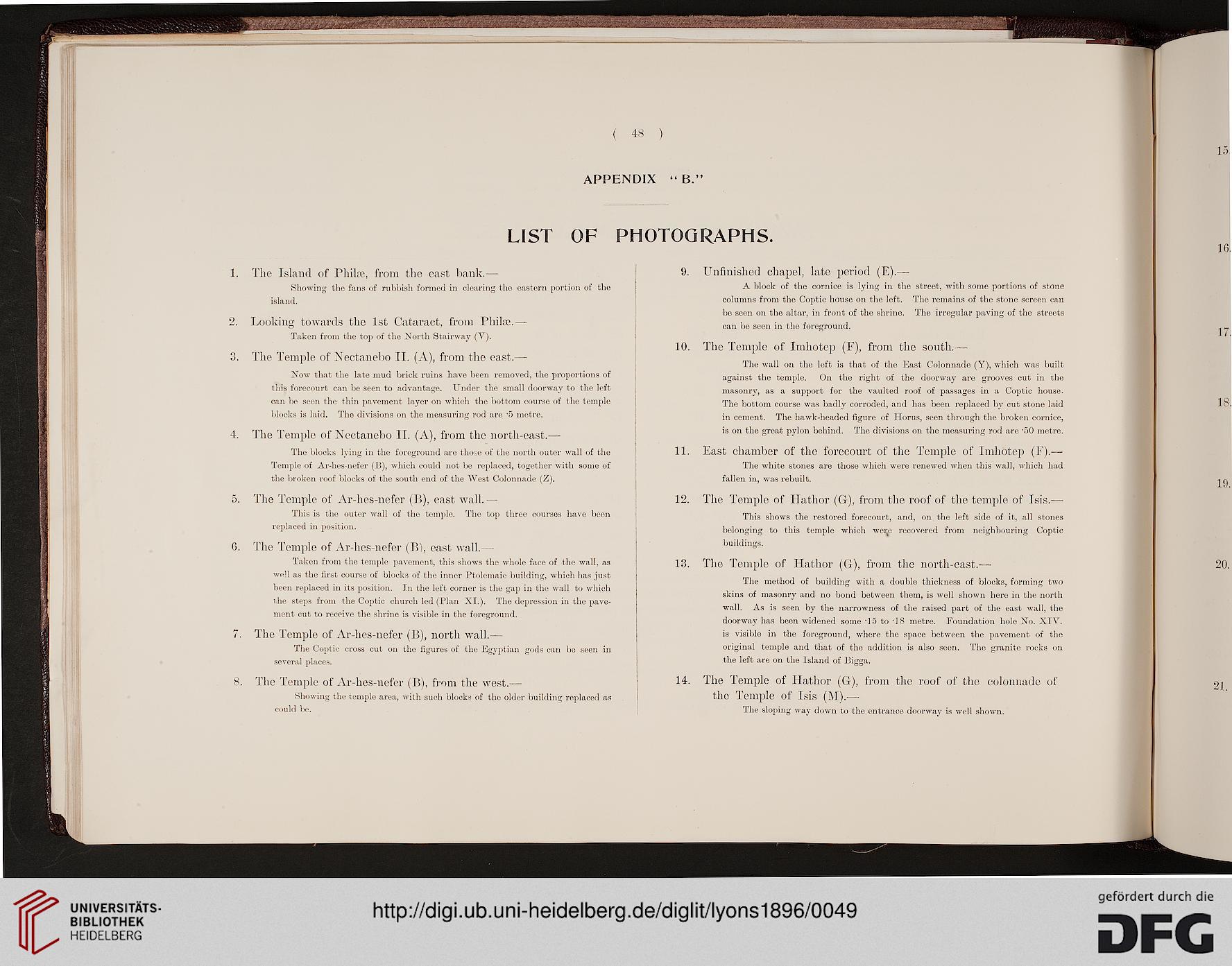 1. The Island of Philse, from the cast hank.—

Showing the fans of rubbish formed in clearing the eastern portion of the
island.

2. Looking towards the 1st Cataract, from Plrilre.—

Taken from the top of the North Stairway (V).

Now that the late mud brick ruins have been removed, the proportions of
this forecourt can be seen to advantage. Under the small doorway to the left
can be seen the thin pavement layer on which the bottom course of the temple
blocks is laid. The divisions on the measuring rod are '5 metre.

The blocks lying in the foreground are those of the north outer wall of the
Temple of Ar-hes-nefer (IS), which could not be replaced, together with some of
the broken roof blocks of tin; south end of the West Colonnade (Z).

This is the outer wall of the temple. The top three courses have been
replaced in position.

Taken from the temple pavement, this shows the whole face of the wall, as
well as the first course of blocks of the inner Ptolemaic building, which has just
been replaced in its position. In the left corner is the gap in the wall to which
the steps from the Coptic church led (Plan XL). The depression in the pave-
ment cut to receive the shrine is visible in the foreground.

The Coptic cross cut on the figures of the Egyptian gods can be seen in
several places.

Showing the temple area, with such blocks of the older building replaced as
could be.

A block of the cornice is lying in the street, with some portions of stone
columns from the Coptic house on the left. The remains of the stone screen can
be seen on the altar, in front of the shrine. The irregular paving of the streets
can be seen in the foreground.

The wall on the left is that of the East Colonnade (Y), which was built
against the temple. On the right of the doorway are grooves cut in the
masonry, as a support for the vaulted roof of passages in a Coptic house.
The bottom course was badly corroded, and has been replaced by cut stone laid
in cement. The hawk-headed figure of Horus, seen through the broken cornice,
is on the great pylon behind. The divisions on the measuring rod are '50 metre.

11. East chamber of the forecourt of the Temple of Imhotep (E).—

The white stones are those which were renewed when this wall, which had
fallen in, was rebuilt.

This shows the restored forecourt, and, on the left side of it, all stones
belonging to this temple which wei^e recovered from neighbouring Coptic
buildings.

The method of building with a double thickness of blocks, forming two
skins of masonry and no bond between them, is well shown here in the north
wall. As is seen by the narrowness of the raised part of the east wall, the
doorway has been widened some '15 to T8 metre. Foundation hole No. XIV.
is visible in the foreground, where the space between the pavement of the
original temple and that of the addition is also seen. The granite rocks on
the left are on the Island of Bigga.

14. The Temple of Hathor (G), from the roof of the colonnade of

The sloping way down to the entrance doorway is well shown.