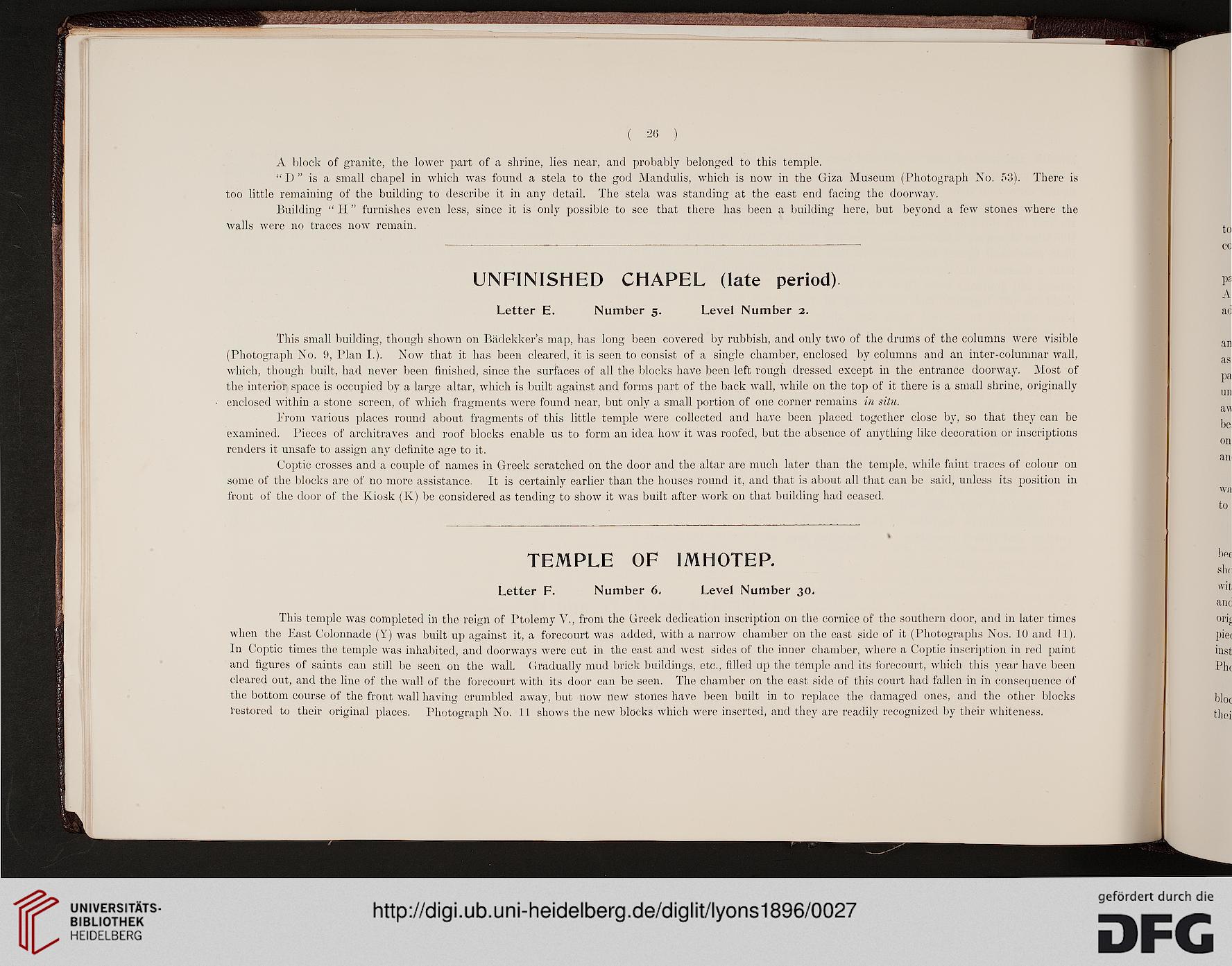 A block of granite, the lower part of a shrine, lies near, and probably belonged to this temple.

" I) " is a small chapel in which was found a stela to the god Mandulis, which is now in the Giza Museum (Photograph No. 53). There is
too little remaining of the building to describe it in any detail. The stela was standing at the east end facing the doorway.

Building " H" furnishes even less, since it is only possible to see that there has been a building here, but beyond a few stones where the
walls were no traces now remain.

This small building, though shown on Badckker's map, has long been covered by rubbish, and only two of the drums of the columns were visible
(Photograph No. 9, Plan I.). Now that it has been cleared, it is seen to consist of a single chamber, enclosed by columns and an inter-columnar wall,
which, though built, had never been finished, since the surfaces of all the blocks have been left rough dressed except in the entrance doorway. Most of
the interior space is occupied by a large altar, which is built against and forms part of the back wall, while on the top of it there is a small shrine, originally
enclosed within a stone screen, of which fragments were found near, but only a small portion of one corner remains in situ.

From various places round about fragments of this little temple were collected and have been placed together close by, so that they can be
examined. Pieces of architraves and roof blocks enable us to form an idea how it was roofed, but the absence of anything like decoration or inscriptions
renders it unsafe to assign any definite age to it.

Coptic crosses and a couple of names in Greek scratched on the door and the altar are much later than the temple, while faint traces of colour on
some of the blocks are of no more assistance. It is certainly earlier than the houses round it, and that is about all that can be said, unless its position in
front of the door of the Kiosk (K) be considered as tending to show it was built after work on that building had ceased.

This temple was completed in the reign of Ptolemy V., from the Greek dedication inscription on the cornice of the southern door, and in later times
when the East Colonnade (Y) was built up against it, a forecourt was added, with a narrow chamber on the east side of it (Photographs Nos. 10 and II),
In Coptic times the temple was inhabited, and doorways were cut in the east and west sides of the inner chamber, where a Coptic inscription in red paint
and figures of saints can still be seen on the Wall. Gradually mud brick buildings, etc., filled up the temple and its forecourt, which this year have been
cleared out, and the line of the wall of the forecourt with its door can be seen. The chamber on the east side of this court had fallen in in consequence of
the bottom course of the front wall having crumbled away, but now new stones have been built in to replace the damaged ones, and the other blocks
restored to their original places. Photograph No. 11 shows the new blocks which were inserted, and they are readily recognized by their whiteness.