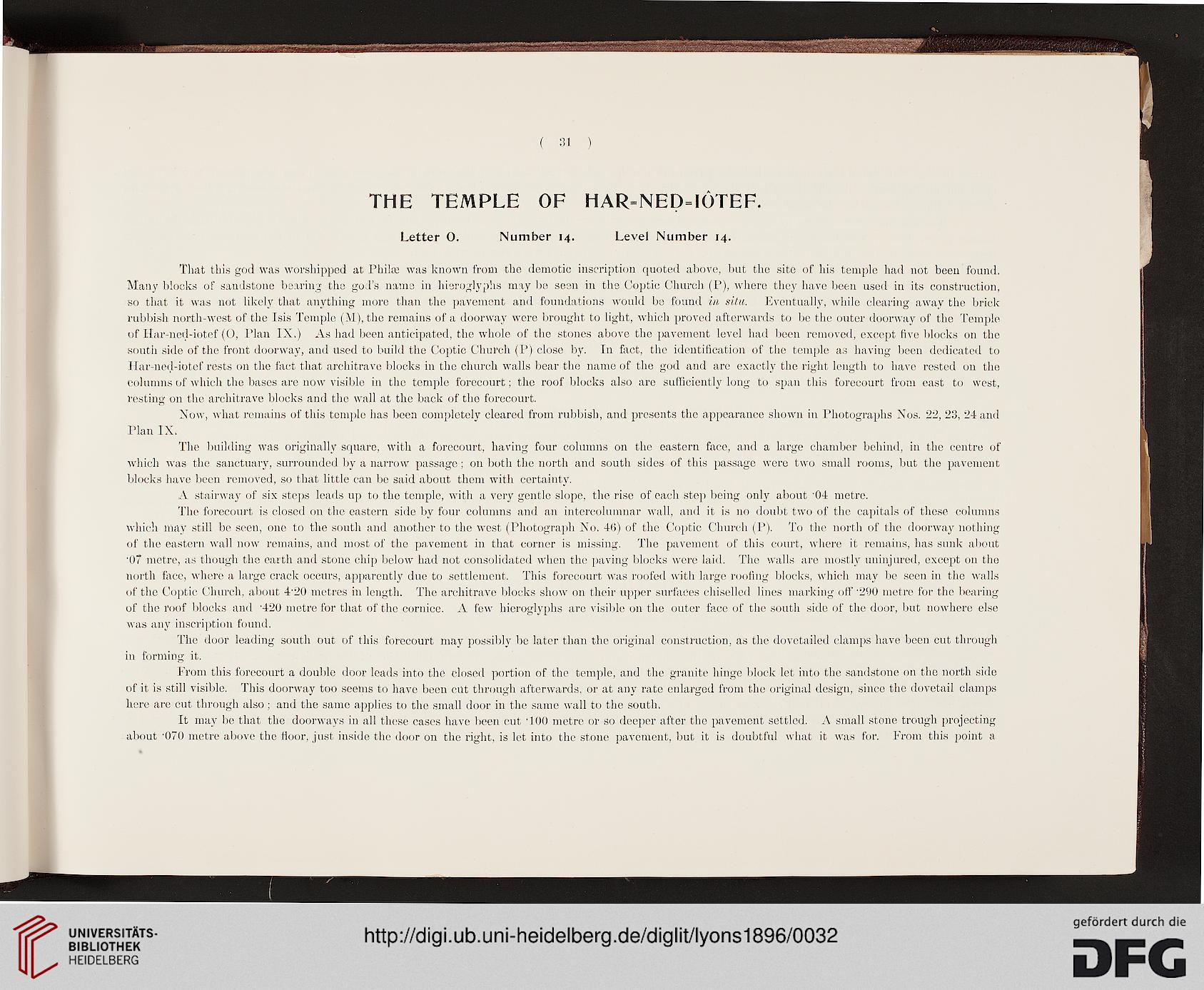 That this god was worshipped at Philse was known from the demotic inscription quoted above, but the site of his temple had not been found.
Many blocks of sandstone bearing the god's name in hieroglyphs may be seen in the Coptic Church (P), where they have been used in its construction,
so that it was not likely that anything more than the pavement and foundations would bo found in si fit. Eventually, while clearing away the brick
rubbish north-west of the Isis Temple (M), the remains of a doorway were brought to light, which proved afterwards to be the outer doorway of the Temple
of Har-ned-iotef (O, Plan IX.) As had been anticipated, the whole of the stones above the pavement level had been removed, except five blocks on the
south side of the front doorway, and used to build the Coptic Church (P) close by. In fact, the identification of the temple as having been dedicated to
Jiar-ncd-iotcf rests on the fact that architrave blocks in the church walls bear the name of the god and are exactly the right length to have rested on the
columns of which the bases are now visible in the temple forecourt; the roof blocks also are sufficiently long to span this forecourt from east to west,
resting on the architrave blocks and the wall at the back of the forecourt.

Now, what remains of this temple has been completely cleared from rubbish, and presents the appearance shown in Photographs Xos. 22, 23, 24 and
Plan IX.

The building was originally square, with a forecourt, having four columns on the eastern face, and a large chamber behind, in the centre of
which was the sanctuary, surrounded by a narrow passage ; on both the north and south sides of this passage were two small rooms, but the pavement
blocks have been removed, so that little can be said about them with certainty.

A stairway of six steps leads up to the temple, with a very gentle slope, the rise of each step being only about '04 metre.

The forecourt is closed on the eastern side by four columns and an intcrcolumnar wall, and it is no doubt two of the capitals of these columns
which may still be seen, one to the south and another to the west (Photograph No. 4<5) of the Coptic Church (P). To the north of the doorway nothing
of the eastern wall now remains, and most of the pavement in that corner is missing. The pavement of this court, where it remains, has sunk about
'0? metre, as though the earth and stone chip below had not consolidated when the paving blocks were laid. The walls are mostly uninjured, except on the
north face, where a large crack occurs, apparently due to settlement. This forecourt was roofed with large roofing blocks, which may be seen in the walls
of the Coptic Church, about 4'20 metres in length. The architrave blocks show on their upper surfaces chiselled lines marking off '290 metre for the bearing
of the roof blocks and '420 metre for that of the cornice. A few hieroglyphs are visible on the outer face of the south side of the door, but nowhere else
was any inscription found.

The door leading south out of this forecourt may possibly be later than the original construction, as the dovetailed clamps have been cut through
in forming it.

From this forecourt a double door leads into the. closed portion of the temple, and the granite hinge block let into the sandstone on the north side
of it is still visible. This doorway too seems to have been cut through afterwards, or at any rate enlarged from the original design, since the dovetail clamps
here are cut through also ; and the same applies to the small door in the same wall to the south,

It may be that the doorways in all these cases have been cut '100 metre or so deeper after the pavement settled. A small stone trough projecting
about -070 metre above the floor, just inside the door on the right, is let into the stone pavement, but it is doubtful what it was for. From this point a