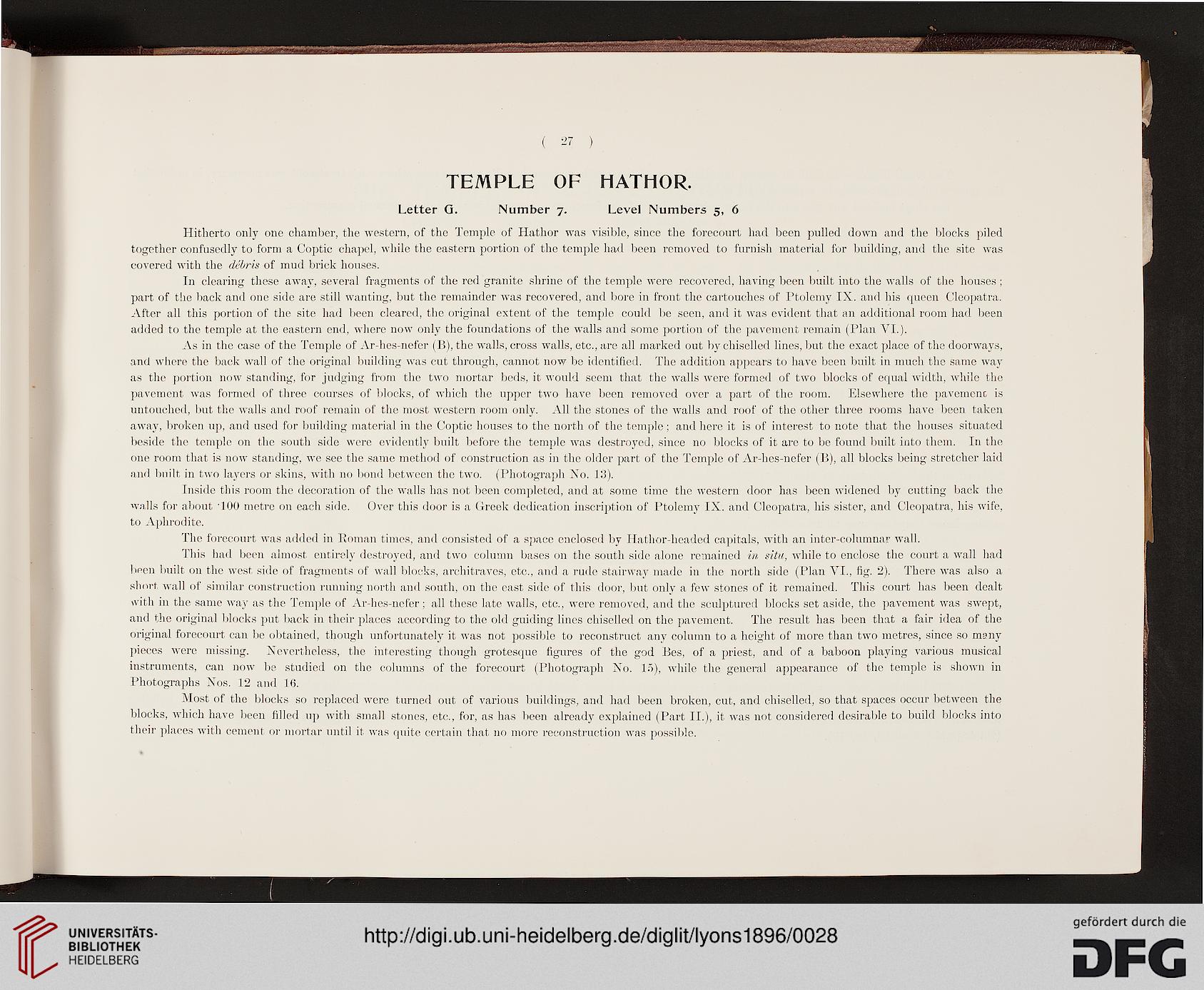 Hitherto only one chamber, the western, of the Temple of Hathor was visible, since the forecourt had been pulled down and the blocks piled
together confusedly to form a Coptic chapel, while the eastern portion of the temple had been removed to furnish material for building, and the site was
covered with the debris of mud brick houses.

In clearing these away, several fragments of the red granite shrine of the temple were recovered, having been built into the walls of the houses ;
part of the back and one side are still wanting, but the remainder was recovered, and bore in front the cartouches of Ptolemy IX. and his queen Cleopatra.
After all this portion of the site had been cleared, the original extent of the temple could be seen, and it was evident that an additional room had been
added to the temple at the eastern end, where now only the foundations of the walls and some portion of the pavement remain (Plan VI.).

As in the case of the Temple of Ar-hes-nefer (B), the walls, cross walls, etc., are all marked out by chiselled lines, but the exact place of the doorways,
and where the back wall of the original building was cut through, cannot now be identified. The addition appears to have been built in much the same way
as the portion now standing, for judging from the two mortar beds, it would seem that the walls were formed of two blocks of equal width, while the
pavement was formed of three courses of blocks, of which the upper two have been removed over a part of the room. Elsewhere the pavemene is
untouched, but the walls and roof remain of the most western room only. All the stones of the walls and roof of the other three rooms have been taken
away, broken up, and used for building material in the Coptic houses to the north of the temple ; and here it is of interest to note that the houses situated
beside the temple on the south side were evidently built before the temple was destroyed, since no blocks of it are to be found built into them. In the
one room that is now standing, we see the same method of construction as in the older part of the Temple of Ar-hes-nefer (B), all blocks being stretcher laid
and built in two layers or skins, with no bond between the two. (Photograph Xo. 1.3).

Inside this room the decoration of the walls has not been completed, and at some time the western door has been widened by cutting back the
walls for about 100 metre on each side. Over this door is a Creek dedication inscription of Ptolemy IX. and Cleopatra, his sister, and Cleopatra, his wife,
to Aphrodite.

The forecourt was added in Roman times, and consisted of a space enclosed by Hathor-headed capitals, with an inter-columnar wall.

This had been almost entirely destroyed, and two column bases on the south side alone remained in situ, while to enclose the court a wall had
been built on the west side of fragments of wall blocks, architraves, etc., and a rude stairway made in the north side (Plan VI., fig. 2). There was also a
short wall of similar construction running north and south, on the east side of this door, but only a few stones of it remained. This court has been dealt
with in the same way as the Temple of Ardies-ncfer; all these late walls, etc., were removed, and the sculptured blocks set aside, the pavement was swept,
and the original blocks put back in their places according to the old guiding lines chiselled on the pavement. The result has been that a fair idea of the
original forecourt can be obtained, though unfortunately it was not possible to reconstruct any column to a height of more than two metres, since so many
pieces were missing. Xevertheless, the interesting though grotesque figures of the god Bes, of a priest, and of a baboon playing various musical
instruments, can now be studied on the columns of the forecourt (Photograph Xo. 15), while the general appearance of the temple is shown in
Photographs Nos. 12 and 1<>.

Most of the blocks so replaced were turned out of various buildings, and had been broken, cut, and chiselled, so that spaces occur between the
blocks, which have been filled up with small stones, etc., for, as has been already explained (Part II.), it was not considered desirable to build blocks into
their places with cement or mortar until it was quite certain that no more reconstruction was possible.