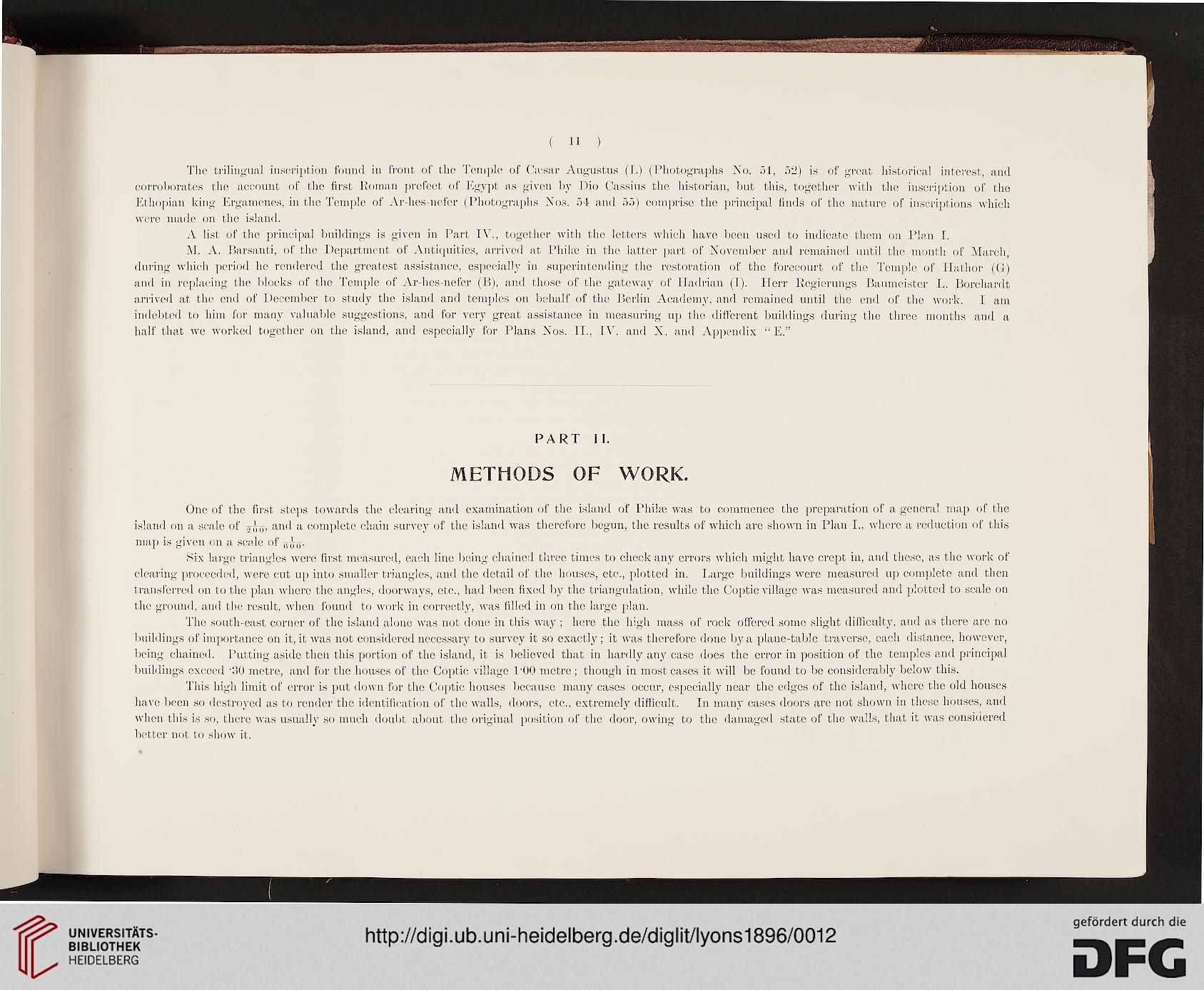 The trilingual inscription found in front of the Temple of Csesar Augustus (L) (Photographs No. 51, 52) is of great historical interest, and
corroborates the account of the first Roman prefect of Egypt as given by Dio Cassius the historian, but this, together with the inscription of the
Ethopian king Ergamenes, in the Temple of Ar-hes-nefer (Photographs Nos. 5-1 and 55) comprise the principal finds of the nature of inscriptions which
were made on the island.

A list of the principal buildings is given in Part TV., together with the letters which have been used to indicate; them on Plan 1.

M. A. Barsanti, of the Department of Antiquities, arrived at Philse in the latter part of November and remained until the month of March,
during which period he rendered the greatest assistance, especially in superintending the restoration of the forecourt of the Temple of Hathor (G)
and in replacing the blocks of the Temple of Ar-hes-nefer (B), and those of the gateway of Hadrian (I). Herr Regierungs Baumeister L. Borchardt
arrived at the end of December to study the island and temples on behalf of the Berlin Academy, and remained until the end of the work. I am
indebted to him for many valuable suggestions, and for very great assistance in measuring up the different buildings during the three months and a
half that we worked together on the island, and especially for Plans Nos. II., IV. and N. and Appendix " E."

One of the first steps towards the clearing and examination of the island of Philse was to commence the preparation of a general map of the
island on a scale of .,,',,,, and a complete chain survey of the island was therefore begun, the results of which are shown in Plan I., where a reduction of this
map is given on a scale of ,.,',„.

Six large triangles were first measured, each line being chained three times to cheek any errors which might have crept in, and these, as the work of
clearing proceeded, were cut up into smaller triangles, and the detail of the houses, etc., plotted in. Large buildings were measured up complete and then
transferred on to the plan where the angles, doorways, etc., had been fixed by the triangulation, while the Coptic village was measured and plotted to scale on
the ground, and the result, when found to work in correctly, was filled in on the large plan.

The south-east corner of the island alone was not done in this way ; here the high mass of rock offered some slight difficulty, and as there are no
buildings of importance on it, it was not considered necessary to survey it so exactly; it was therefore done by a plane-table traverse, each distance, however,
being chained. Putting aside then this portion of the island, it is believed that in hardly any case does the error in position of the temples and principal
buildings exceed 30 metre, and for the houses of the Coptic village POO metre; though in most cases it will bo found to be considerably below this.

This high limit of error is put down for the Coptic houses because many cases occur, especially near the edges of the island, where the old houses
have been so destroyed as to render the identification of the walls, doors, etc., extremely difficult, In many cases doors are not shown in these houses, and
when this is so, there was usually so much doubt about the original position of the door, owing to the damaged state of the walls, that it was conshiered
better not to show it.