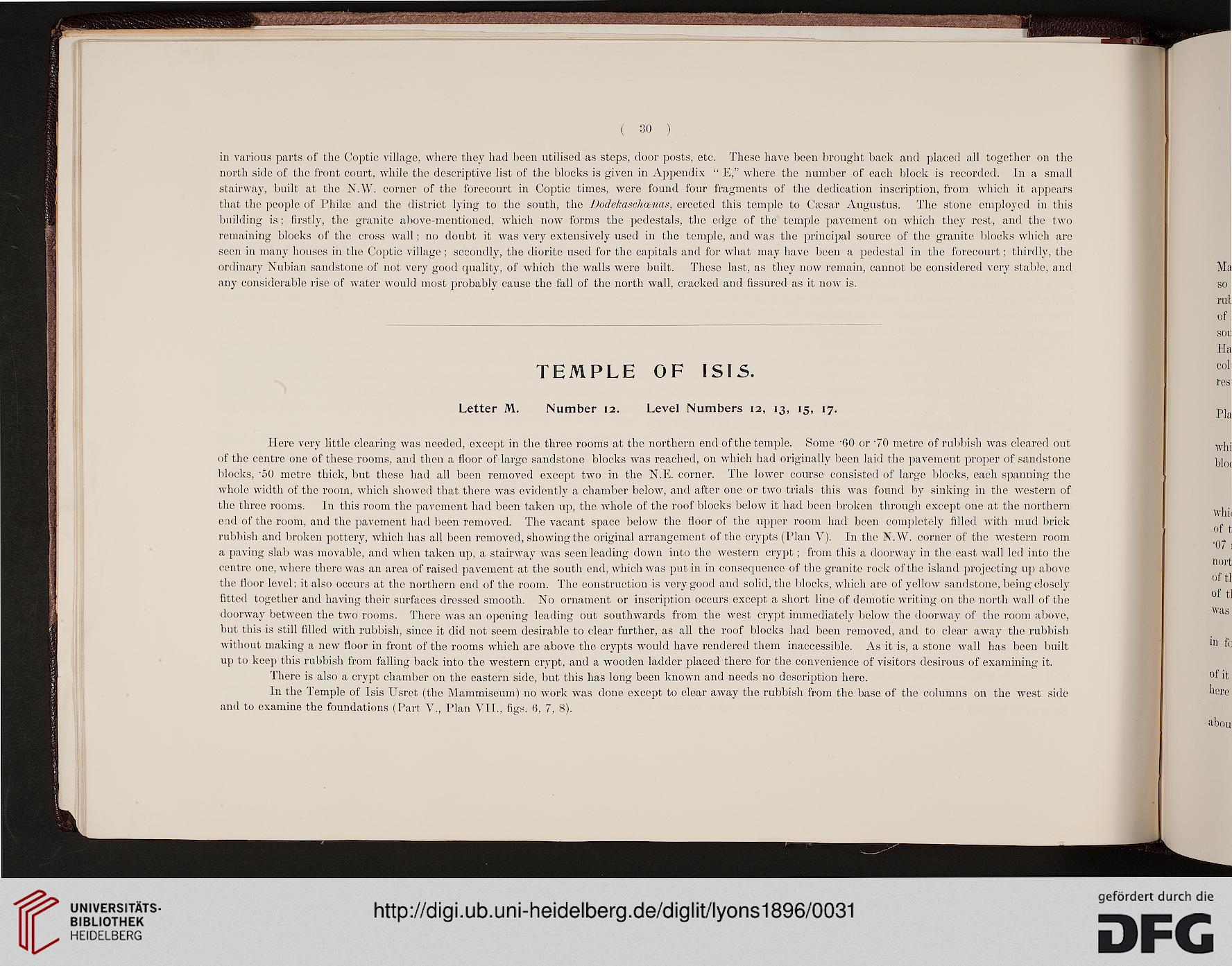 in various parts of the Coptic village, where they had been utilised as steps, door posts, etc. These have been brought back and placed all together on the
north side of the front court, while the descriptive list of the blocks is given in Appendix " E," where the number of each block is recorded. In a small
stairway, built at the N.W. corner of the forecourt in Coptic times, were found four fragments of the dedication inscription, from which it appears
that the people of Philse and the district lying to the south, the Dodekaschotnas, erected this temple to Csesar Augustus. The stone employed in this
building is ; firstly, the granite above-mentioned, which now forms the pedestals, the edge of the temple pavement on which they rest, and the two
remaining blocks of the cross wall : no doubt it was very extensively used in the temple, and was the principal source of the granite blocks which are
seen in many houses in the Coptic village ; secondly, the diorite used for the capitals and for what may have been a pedestal in the forecourt; thirdly, the
ordinary Nubian sandstone of not very good quality, of which the walls were built. These last, as they now remain, cannot be considered very stable, and
any considerable rise of water would most probably cause the fall of the north wall, cracked and fissured as it now is.

Here very little clearing was needed, except in the three rooms at the northern end of the temple. Some -60 or 70 metre of rubbish was cleared out
of the centre one of these rooms, and then a floor of large sandstone blocks was reached, on which had originally been laid the pavement proper of sandstone
blocks, -50 metre thick, but these had all been removed except two in the N.E. corner. The lower course consisted of large blocks, each spanning the
whole width of the room, which showed that there was evidently a chamber below, and after one or two trials this was found by sinking in the western of
the three rooms. In this room the pavement had been taken up, the whole of the roof blocks below it had been broken through except one at the northern
e:ul of the room, and the pavement had been removed. The vacant space below the floor of the upper room had been completely filled with mud brick
rubbish and broken pottery, which has all been removed, showing the original arrangement of the crypts (Plan V). In the N.W. corner of the western room
a paving slab was movable, and when taken up, a stairway was seen leading down into the western crypt ; from this a doorway in the east wall led into the
centre one, where there was an area of raised pavement at the south end, which was put in in consequence of the granite rock of the island projecting up above
the floor level; it also occurs at the northern end of the room. The construction is very good and solid, the blocks, which are of yellow sandstone, being closely
fitted together and having their surfaces dressed smooth. No ornament or inscription occurs except a short line of demotic writing on the north wall of the
doorway between the two rooms. There was an opening leading out southwards from the west crypt immediately below the doorway of the room above,
but this is still filled with rubbish, since it did not seem desirable to clear further, as all the roof blocks had been removed, and to clear away the rubbish
without making a new floor in front of the rooms which are above the crypts would have rendered them inaccessible. As it is, a stone wall has been built
up to keep this rubbish from falling back into the western crypt, and a wooden ladder placed there for the convenience of visitors desirous of examining it.

There is also a crypt chamber on the eastern side, but this has long been known and needs no description here.

In the Temple of Isis Usret (the Mammiseum) no work was done except to clear away the rubbish from the base of the columns on the west side
and to examine the foundations (Part V., Plan VII., figs. li. 7, 8).