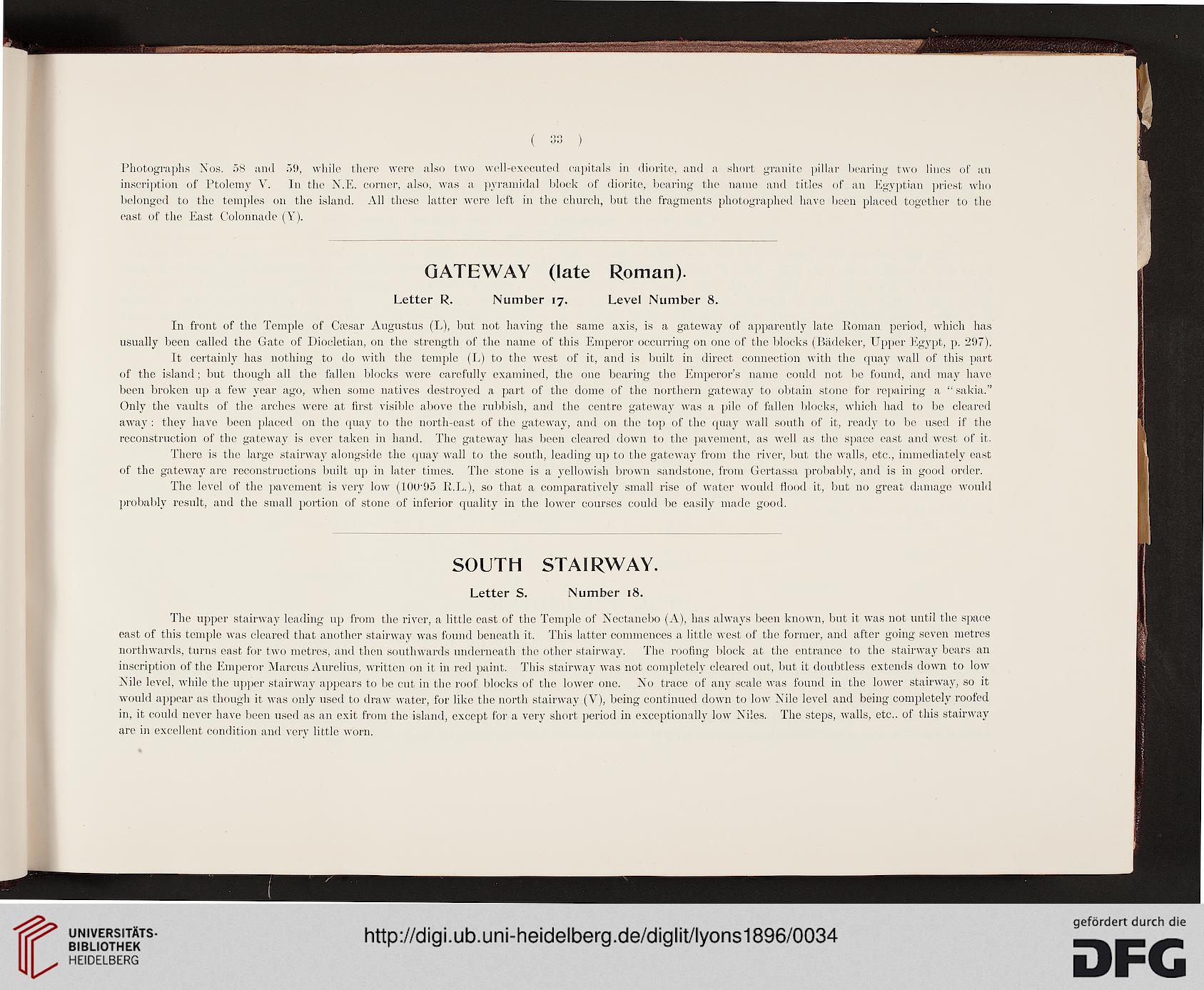 Photographs Nos. 58 and 59, while there wore also two well-executed capitals in diorite, and a short granite pillar hearing two lines of an
inscription of Ptolemy V. In the N.E. corner, also, was a pyramidal block of diorite, bearing the name and titles of an Egyptian priest who

belonged to the temples on the island. All these latter were left in the church, but the fragments photographed have been placed together to the
east of the East Colonnade (Y).

In front of the Temple of Cresar Augustus (L), but not having the same axis, is a gateway of apparently late Roman period, which has
usually been called the Gate of Diocletian, on the strength of the name of this Emperor occurring on one of the blocks (Badeker, Upper Egypt, p. 297).

It certainly has nothing to do witli the temple (L) to the west of it, and is built in direct connection with the quay wall of this part
of the island; but though all the fallen blocks were carefully examined, the one bearing the Emperor's name could not be found, and may have
been broken up a few year ago, when some natives destroyed a part of the dome of the northern gateway to obtain stone for repairing a " sakia."
Only the vaults of the arches were at first visible above the rubbish, and the centre gateway was a pile of fallen blocks, which had to be cleared
away: they have been placed on the quay to the north-east of the gateway, and on the top of the quay wall south of it, ready to be used if the
reconstruction of the gateway is ever taken in hand. The gateway has been cleared down to the pavement, as well as the space east and west of it.

There is the large stairway alongside the quay wall to the south, leading up to the gateway from the river, but the walls, etc., immediately east
of the gateway are reconstructions built up in later times. The stone is a yellowish brown sandstone, from Gertassa probably, and is in good order.

The level of the pavement is very low (10Ul)5 R.L.), so that a comparatively small rise of water would flood it, but no great damage would
probably result, and the small portion of stone of inferior quality in the lower courses could be easily made good.

The upper stairway leading up from the river, a little east of the Temple of Nectanebo (A), has always been known, but it was not until the space
east of this temple was cleared that another stairway was found beneath it. This latter commences a little west of the former, and after going seven metres
northwards, turns east for two metres, and then southwards underneath the other stairway. The roofing block at the entrance to the stairway bears an
inscription of the Emperor Marcus Aurelius, written on it in red paint. This stairway was not completely cleared out, but it doubtless extends down to low
Nile level, while the upper stairway appears to be cut in the roof blocks of the lower one. No trace of any scale was found in the lower stairway, so it
would appear as though it was only used to draw water, for like the north stairway (V), being continued down to low Nile level and being completely roofed
in, it could never have been used as an exit from the island, except for a very short period in exceptionally low Niles. The steps, walls, etc.. of this stairway
are in excellent condition and verv little worn.