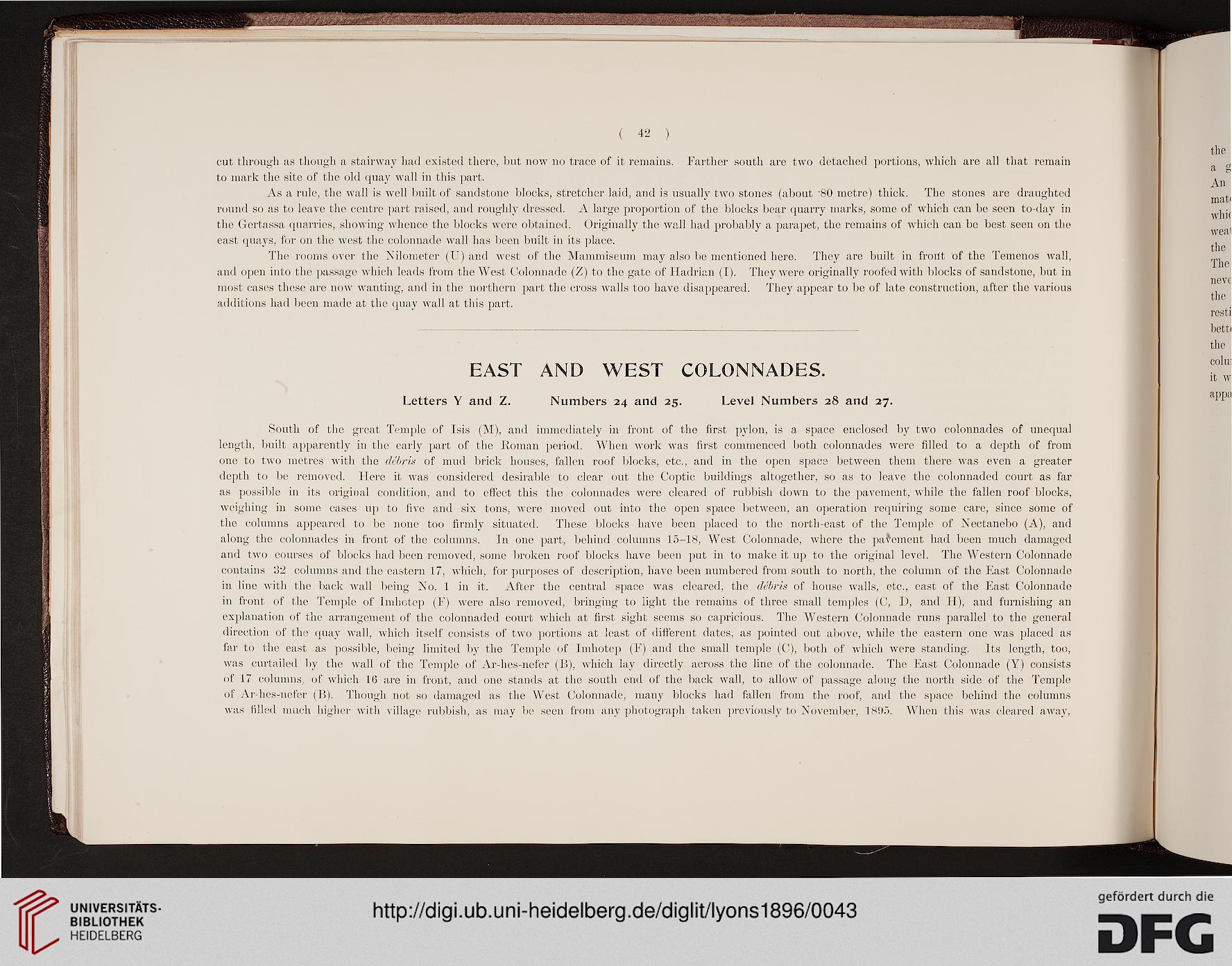 cut through as though a stairway had existed there, hut now no trace of it remains. Farther south are two detached portions, which are all that remain
to mark the site of the old quay wall in this part.

As a rule, the wall is well built of sandstone blocks, stretcher laid, and is usually two stones (about '80 metre) thick. The stones are draughted
round so as to leave the centre part raised, and roughly dressed. A large proportion of the blocks bear quarry marks, some of which can be seen to-day in
the Gertassa quarries, showing whence the blocks were obtained. Originally the wall had probably a parapet, the remains of which can be best seen on the
east quays, for on the west the colonnade wall has been built in its place.

The looms over the kilometer (U) and west of the Mammiseum may also be mentioned here. They are built in front of the Temenos wall,
and open into the passage which leads from the West Colonnade (Z) to the gate of Hadrian (I). They were originally roofed with blocks of sandstone, but in
must cases these are now wanting, and in the northern part the cross walls too have disappeared. They appear to be of late construction, after the various
additions had been made at the quay wall at this part.

South of the great Temple of Isis (M), and immediately in front of the first pylon, is a space enclosed by two colonnades of unequal

length, built apparently in the early part of the Roman period. When work was first commenced both colonnades were filled to a depth of from

one to two metres with the debris of mud brick houses, fallen roof blocks, etc., and in the open space between them there was even a greater

depth to be removed. Here it was considered desirable to clear out the Coptic buildings altogether, so as to leave the colonnaded court as far

as possible in its original condition, and to effect this the colonnades were cleared of rubbish down to the pavement, while the fallen roof blocks,

weighing in some cases up to five and six tons, were moved out into the open space between, an operation requiring some care, since some of

the columns appeared to be none too firmly situated. These blocks have been placed to the north-east of the Temple of Nectanebo (A), and

along the colonnades in front of the columns. In one part, behind columns 15-18, West Colonnade, where the pavement had been much damaged

and two courses of blocks had been removed, some broken roof blocks have been put in to make it up to the original level. The Western Colonnade

contains \Y2 columns and the eastern 17, which, for purposes of description, have been numbered from south to north, the column of the East Colonnade

in line with the back wall being Xo. 1 in it. After the central space was cleared, the debris of house walls, etc., east of the East Colonnade

in front of the Temple of Imhotep (F) were also removed, bringing to light the remains of three small temples (C, E, and II), and furnishing an

explanation of the arrangement of the colonnaded court which at first sight seems so capricious. The Western Colonnade runs parallel to the general

direction of the quay wall, which itself consists of two portions at least of different dates, as pointed out above, while the eastern one was placed as

far to the east as possible, being limited by the Temple of Imhotep (F) and the small temple (C), both of which were standing. Its length, too,

was curtailed by the wall of the Temple of Ar-hes-nefer (1»), which lay directly across the line of the colonnade. The East Colonnade (Y) consists

of 17 columns,, of which 1(5 are in front, and one stands at the south end of the back wall, to allow of passage along the north side of the Temple

of Ar-hes-nefer (]>). Though not so damaged as the West Colonnade, many blocks had fallen from the roof, and the space behind the columns

was filled much higher with village rubbish, as may be seen from any photograph taken previously to November, L895. When this was cleared away,