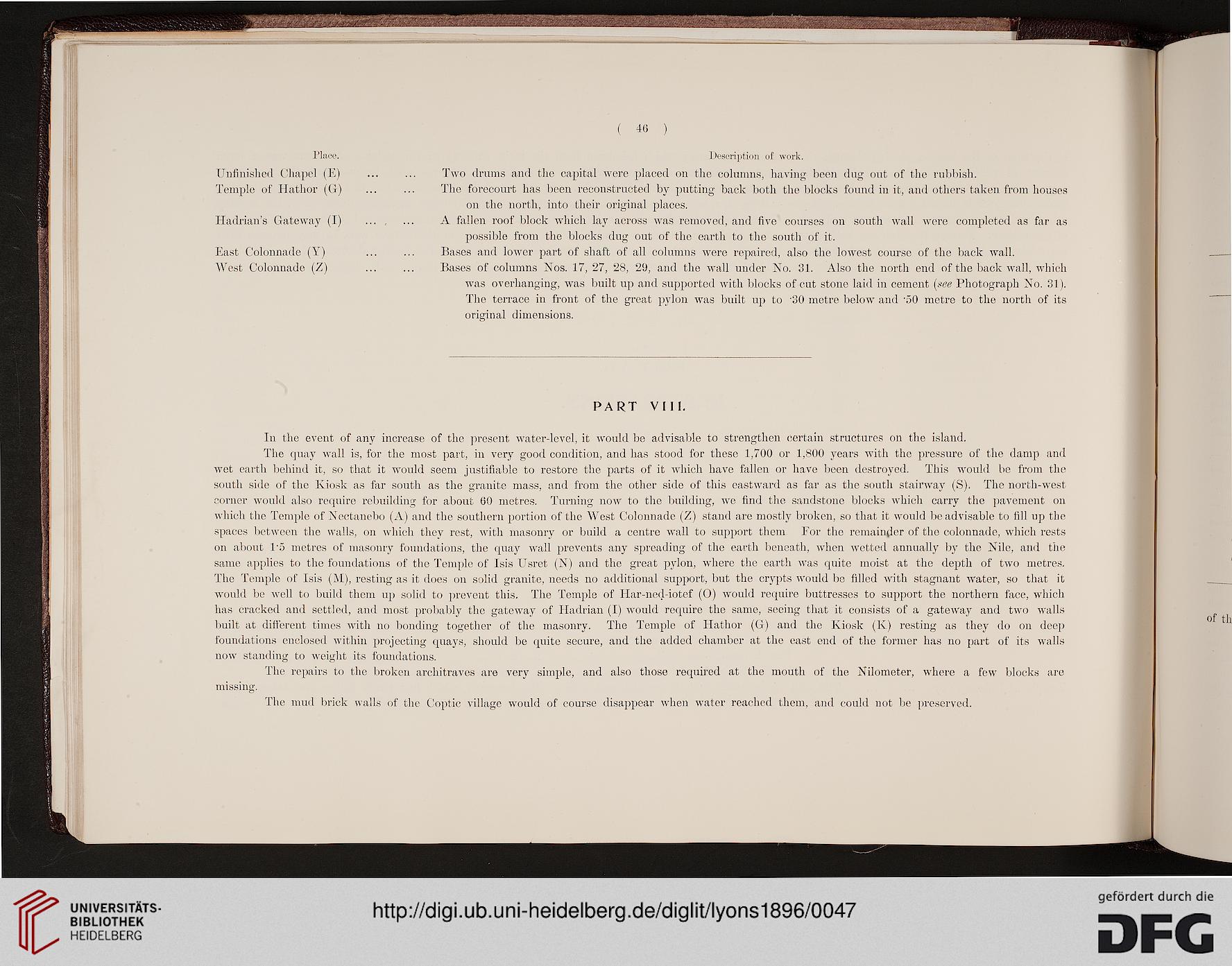 I (escription of work.
Two drums and the capital were placed on the columns, having been dug out of the rubbish.
The forecourt has been reconstructed by putting back both the blocks found in it, and others taken from houses

on the north, into their original places.
A fallen roof block which lay across was removed, and five courses on south wall were completed as far as

possible from the blocks dug out of the earth to the south of it.
Bases and lower part of shaft of all columns were repaired, also the lowest course of the back wall.
Bases of columns Nos. 17, 27, 28, 29, and the wall under No. 31. Also the north end of the back wall, which

was overhanging, was built up and supported with blocks of cut stone laid in cement [see Photograph No. 31).

In the event of any increase of the present water-level, it would be advisable to strengthen certain structures on the island.

The quay wall is, for the most part, in very good condition, and has stood for these 1,700 or 1,800 years with the pressure of the damp and
wet earth behind it, so that it would seem justifiable to restore the parts of it which have fallen or have been destroyed. This would be from the
south side of the Kiosk as far south as the granite mass, and from the other side of this eastward as far as the south stairway (S). The north-west
corner would also require rebuilding for about 60 metres. Turning now to the building, we find the sandstone blocks which carry the pavement on
which the Temple of Nectanebo (A) and the southern portion of the West Colonnade (Z) stand are mostly broken, so that it would be advisable to fill up the
spaces between the walls, on which they rest, with masonry or build a centre wall to support them For the remainder of the colonnade, which rests
on about 15 metres of masonry foundations, the quay wall prevents any spreading of the earth beneath, when wetted annually by the Nile, and the
same applies to the foundations of the Temple of Isis Usret (N) and the great pylon, where the earth was quite moist at the depth of two metres.
The Temple of Isis (M), resting as it docs on solid granite, needs no additional support, but the crypts would be filled with stagnant water, so that it
would be well to build them up solid to prevent this. The Temple of Har-ned-iotef (O) would require buttresses to support the northern face, which
has cracked and settled, and most probably the gateway of Hadrian (I) would require the same, seeing that it consists of a gateway and two walls
built at different times with no bonding together of the masonry. The Temple of Hathor (G) and the Kiosk (K) resting as they do on deep
foundations enclosed within projecting quays, should be quite secure, and the added chamber at the east end of the former has no part of its walls
now standing to weight its foundations.

The repairs to the broken architraves are very simple, and also those required at the mouth of the Nilometer, where a few blocks are
missing.

The mud brick walls of the Coptic village would of course disappear when water reached them, and could not be preserved.