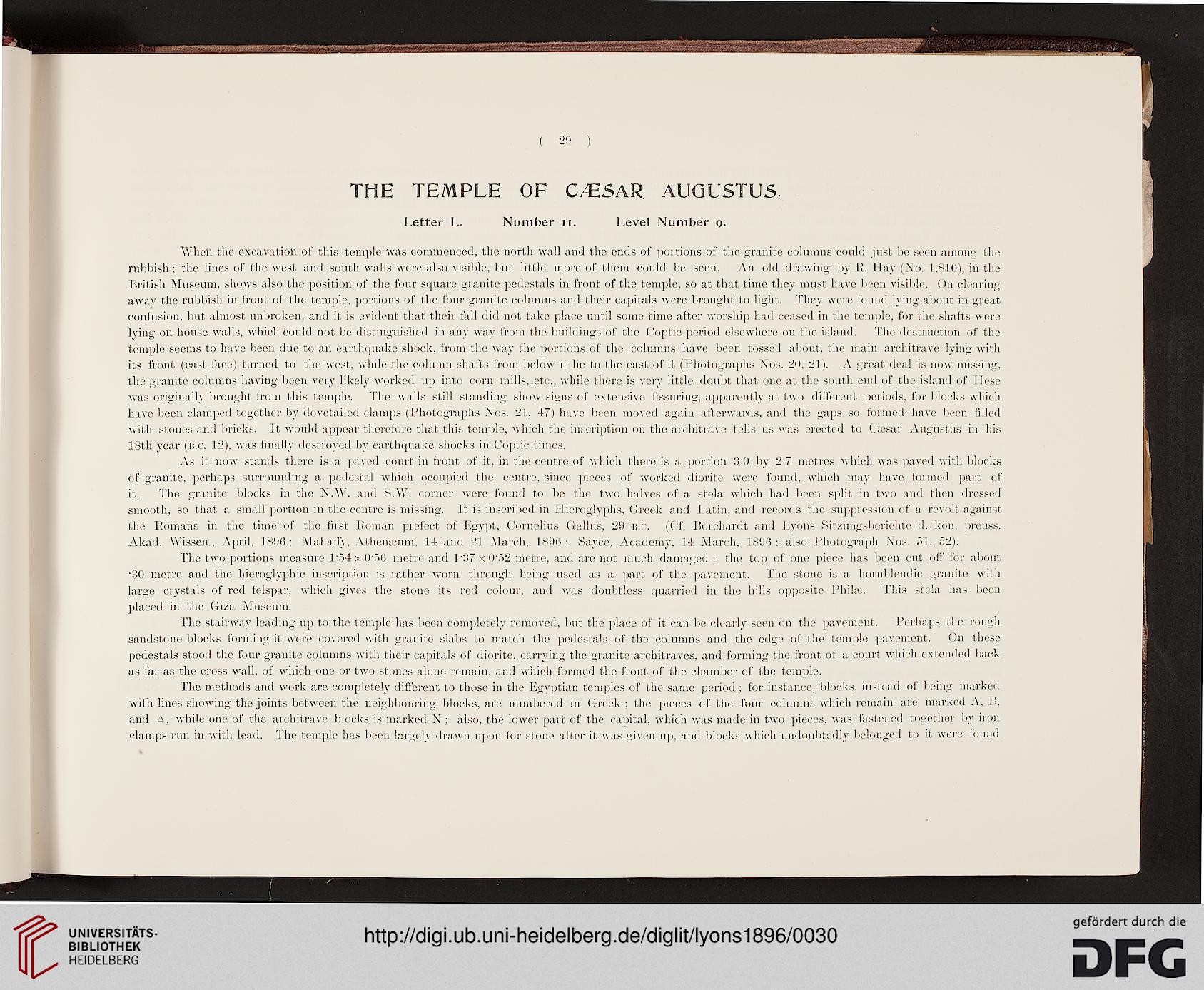 THE TEMPLE OF C/ESAR AUGUSTUS

When the excavation of this temple was commenced, the north wall and the ends of portions of the granite columns could just be seen among the
rubbish; the lines of the west and south walls were also visible, but little more of them could be seen. An old drawing by R Hay (No. 1,810), in the
British Museum, shows also the position of the four square granite pedestals in front of the temple, so at that time they must have been visible. On clearing
away the rubbish in front of the temple, portions of the four granite columns and their capitals were brought to light. They were found lying about in great
contusion, but almost unbroken, and it is evident that their fall did not take place until some time after worship had ceased in the temple, for the shafts were
lying on house walls, which could not be distinguished in any way from the buildings of the Coptic period elsewhere on the island. The destruction of the
temple seems to have been due to an earthquake shock, from the way the portions of the columns have been tossed about, the main architrave lying with
its front (east face) turned to the west, while the column shafts from below it lie to the east of it (Photographs Nos. 20, 21 ). A gsvat deal is now missing,
the granite columns having been very likely worked up into corn mills, etc., while there is very little doubt that one at the south end of the island of Hese
was originally brought from this temple. The walls still standing show signs of extensive Assuring, apparently at two different periods, for blocks which
have been clamped together by dovetailed clamps (Photographs Nos. 21, 47) have been moved again afterwards, and the gaps so formed have been filled
with stones and bricks. It would appear therefore that this temple, which the inscription on the architrave tells us was erected to Csesar Augustus in his
18th year (b.c. 12), was finally destroyed by earthquake shocks in Coptic times.

As it now stands there is a paved court in front of it, in the centre of which there is a portion 30 by 27 metres which was paved witli blocks
of granite, perhaps surrounding a pedestal which occupied the centre, since pieces of worked diorite were found, which may have formed part of
it. The granite blocks in the N.W. and S.W. corner were found to be the two halves of a stela which had been split in two and then dressed
smooth, so that, a small portion in the centre is missing. It is inscribed in Hieroglyphs, Greek and Latin, and records the suppression of a revolt against
the Romans in the time of the first Roman prefect of Egypt, Cornelius Callus, 29 B.C. (Cf. Borchardt and Lyons Sitzungsberichte d. kon. preuss.
Akad. Wissen., April, 1896; Mahaffy, Athenaeum, 14 and 21 March, L896 ; Sayce, Academy, 14 March, 1896; also Photograph Nos. 51, 52).

The two portions measure L54 x 0'56 metre and L37 x 0'52 metre, and are not much damaged ; the top of one piece has been cut off for about
'30 metre and the hieroglyphic inscription is rather worn through being used as a part of the pavement. The stone is a hornblendic granite with
large crystals of red felspar, which gives the stone its red colour, and was doubtless quarried in the hills opposite Philte. This stela has been
placed in the Giza Museum.

The stairway leading up to the temple has been completely removed, but the place of it can be clearly seen on the pavement. Perhaps the rough
sandstone blocks forming it were covered with granite slabs to match the pedestals of the columns and the edge of the temple pavement. On these
pedestals stood the four granite columns -with their capitals of diorite, carrying the granite architraves, and forming the front of a court which extended back
as far as the cross wall, of winch one or two stones alone remain, and which formed the front of the chamber of the temple.

The methods and work are completely different to those in the Egyptian temples of the same period ; for instance, blocks, instead of being marked
with lines showing the joints between the neighbouring blocks, are numbered in Creek; the pieces of the four columns which remain are marked A, B,
and A, while one of the architrave blocks is marked N ; also, the lower part of the capital, which was made in two pieces, was fastened together by iron
clamps run in with lead. The temple has been largely drawn upon for stone after it was given up, and blocks which undoubtedly belonged to it were found