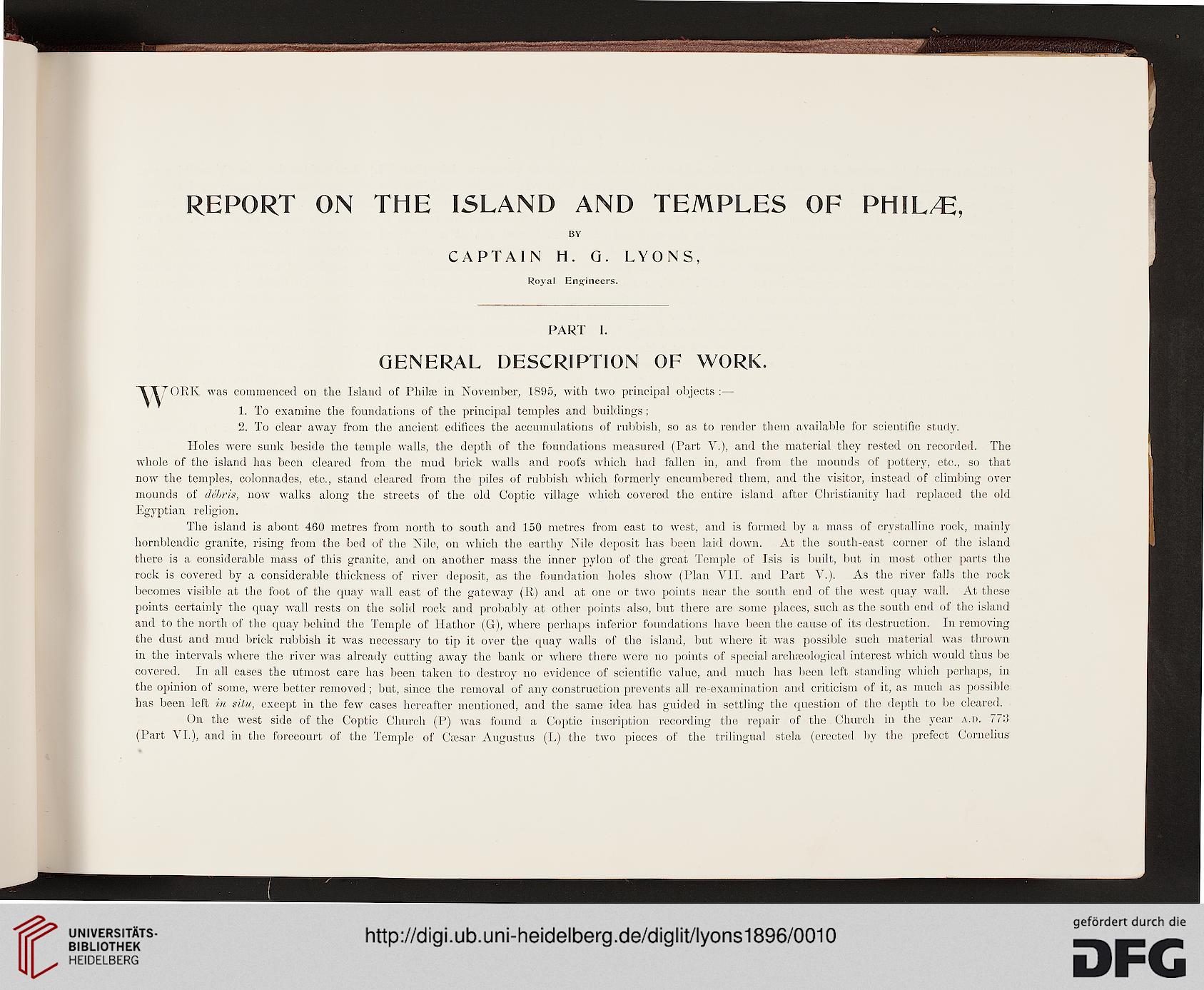 Scroll
OCR fulltext
Information about OCR text
REPORT ON THE ISLAND AND TEMPLES OF PHIL/E,

"VT70RK was commenced on the Island of Philae in November, 1895, with two principal objects:—

1. To examine the foundations of the principal temples and buildings ;

2. To clear away from the ancient edifices the accumulations of rubbish, so as to render them available for scientific stud}7".

Holes were sunk beside the temple walls, the depth of the foundations measured (Part V.), and the material they rested on recorded. The
whole of the island has been cleared from the mud brick walls and roofs which had fallen in, and from the mounds of pottery, etc., so that
now the temples, colonnades, etc., stand cleared from the piles of rubbish which formerly encumbered them, and the visitor, instead of climbing over
mounds of debris, now walks along the streets of the old Coptic village which covered the entire island after Christianity had replaced the old
Egyptian religion.

The island is about 460 metres from north to south and 150 metres from east to west, and is formed by a mass of crystalline rock, mainly
hornblendic granite, rising from the bed of the Nile, on which the earthy Nile deposit has been laid down. At the south-east corner of the island
there is a considerable mass of this granite, and on another mass the inner pylon of the great Temple of Isis is built, but in most other parts the
rock is covered by a considerable thickness of river deposit, as the foundation holes show (Plan VII. and Tart V.). As the river falls the rock
becomes visible at the foot of the quay wall east of the gateway (11) and at one or two points near the south end of the west quay wall. At these
points certainly the quay wall rests on the solid rock and probably at other points also, but there are some places, such as the south end of the island
and to the north of the quay behind the Temple of Hathor (G), where perhaps inferior foundations have been the cause of its destruction. In removing
the dust and mud brick rubbish it was necessary to tip it over the quay walls of the island, but where it was possible such material was thrown
in the intervals where the river was already cutting away the bank or where there were no points of special archaeological interest which would thus be
covered. In all cases the utmost care has been taken to destroy no evidence of scientific value, and much has been left standing which perhaps, in
the opinion of some, were better removed; but, since the removal of any construction prevents all re-examination and criticism of it, as much as possible
has been left in situ, except in the few cases hereafter mentioned, and the same idea has guided in settling the question of the depth to be cleared.

On the west side of the Coptic Church (P) was found a Coptic inscription recording the repair of the Church in the year a.d, 77:>
(Part VI.), and in the forecourt of the Temple of Csesar Augustus (L) the two pieces of the trilingual stela (erected by the prefect Cornelius