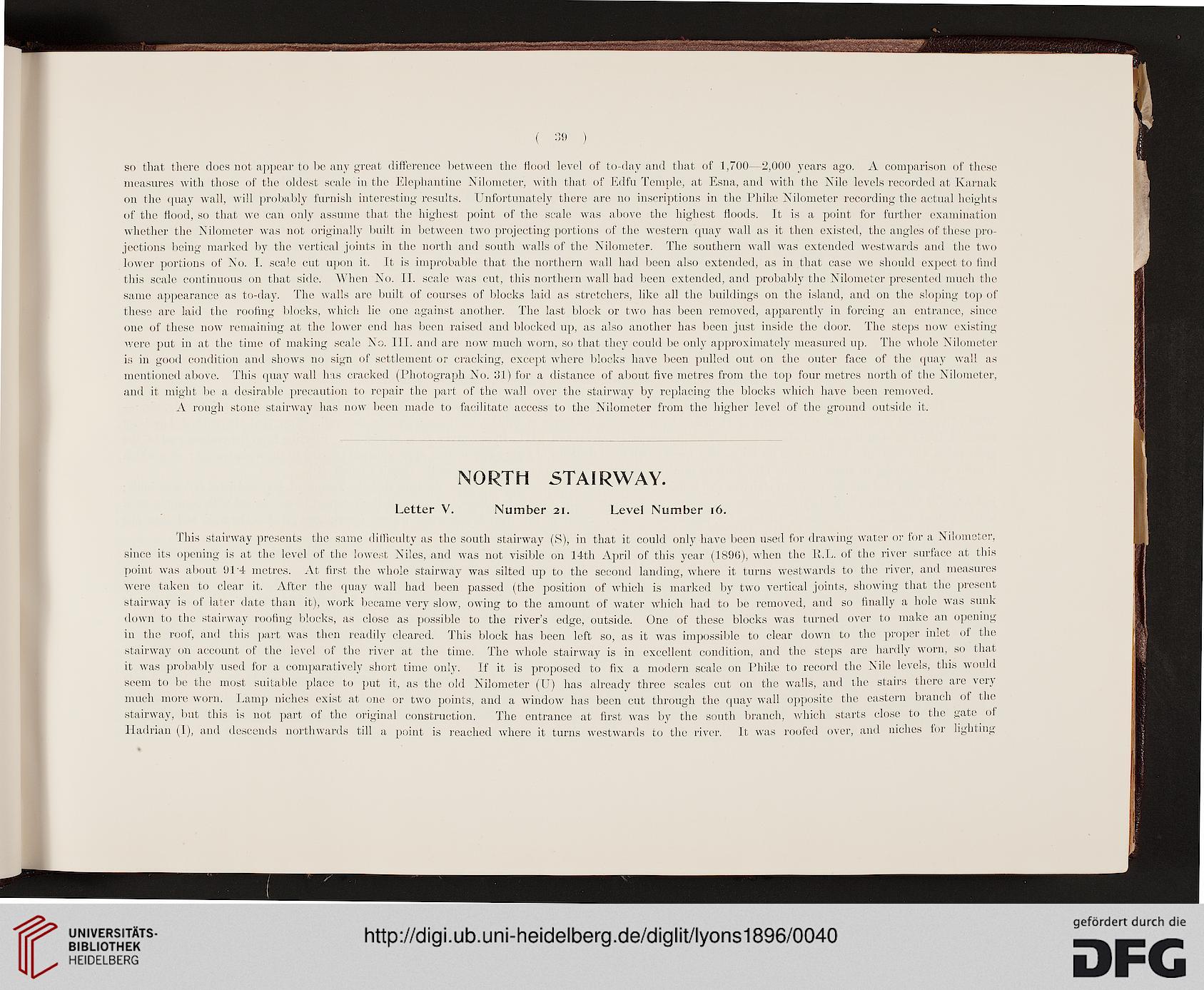 so that there does not appear to be any great difference between the flood level of to-day and that of 1,700—2,000 years ago. A comparison of these
measures with those of the oldest scale in the Klephantine Nilometer, with that of Kdfu Temple, at Esna, and with the Nile levels recorded at Karnak
on the quay wall, will probably furnish interesting results. Unfortunately there are no inscriptions in the Philse Nilometer recording the actual heights
of the Hood, so that we can only assume that the highest point of the scale was above the highest floods. It is a point for further examination
whether the Nilometer was not originally built in between two projecting portions of the western quay wall as it then existed, the angles of these pro-
jections being marked by the vertical joints in the north and south walls of the Nilonieter. The southern wall was extended westwards and the two
lower portions of No. 1. scale cut upon it. It is improbable that the northern wall had been also extended, as in that case we should expect to find
this scale continuous on that side. When No. II. scale was cut, this northern wall had been extended, and probably the Nilometer presented much the
same appearance as to-day. The walls are built of courses of blocks laid as stretchers, like all the buildings on the island, and on the sloping top of
these are laid the roofing blocks, which lie oue against another. The last block or two has been removed, apparently in forcing an entrance, since
one of these now remaining at the lower end has been raised and blocked up, as also another has been just inside the door. The steps now existing
were put in at the time of making scale No. III. and are now much worn, so that they could be only approximately measured up. The whole Nilonieter
is in good condition and shows no sign of settlement or cracking, except where blocks have been pulled out on the outer face of the quay wall as
mentioned above. This quay wall his cracked (Photograph No. 31) for a distance of about five metres from the top four metres north of the Nilometer,
and it might be a desirable precaution to repair the part of the wall over the stairway by replacing the blocks which have been removed.
A rough stone stairway has now been made to facilitate access to the Nilometer from the higher level of the ground outside it.

This stairway presents the same difficulty as the south stairway (S), in that it could only have been used for drawing water or for a Nilometer,
since its opening is at the level of the lowest Niles, and was not visible on 14th April of this year (189(5), when the R.L. of the river surface at this
point was about 9T4 metres. At first the whole stairway was silted up to the second landing, where it turns westwards to the river, and measures
were taken to clear it. After the quay wall had been passed (the position of which is marked by two vertical joints, showing that the present
stairway is of later date than it), work became very slow, owing to the amount of water which had to be removed, and so finally a hole was sunk
down to the stairway roofing blocks, as close as possible to the river's edge, outside. One of these blocks was turned over to make an opening
in the roof, and this part was then readily cleared. This block has been left so, as it was impossible to clear down to the proper inlet of the
stairway on account of the level of the river at the time. The whole stairway is in excellent condition, and the steps are hardly worn, so that
it was probably used for a comparatively short time only. If it is proposed to fix a modern scale on Philse to record the Nile levels, this would
seem to be the most suitable place to put it, as the old Nilometer (U) has already three scales cut on the walls, and the stairs there are very-
much more worn. Lamp niches exist at one or two points, and a window has been cut through the quay wall opposite the eastern branch of the
stairway, but this is not part of the original construction. The entrance at first was by the south branch, which starts close to the -ate of
Hadrian (I), and descends northwards till a point is reached where it turns westwards to the river. It was roofed over, and niches for lighting