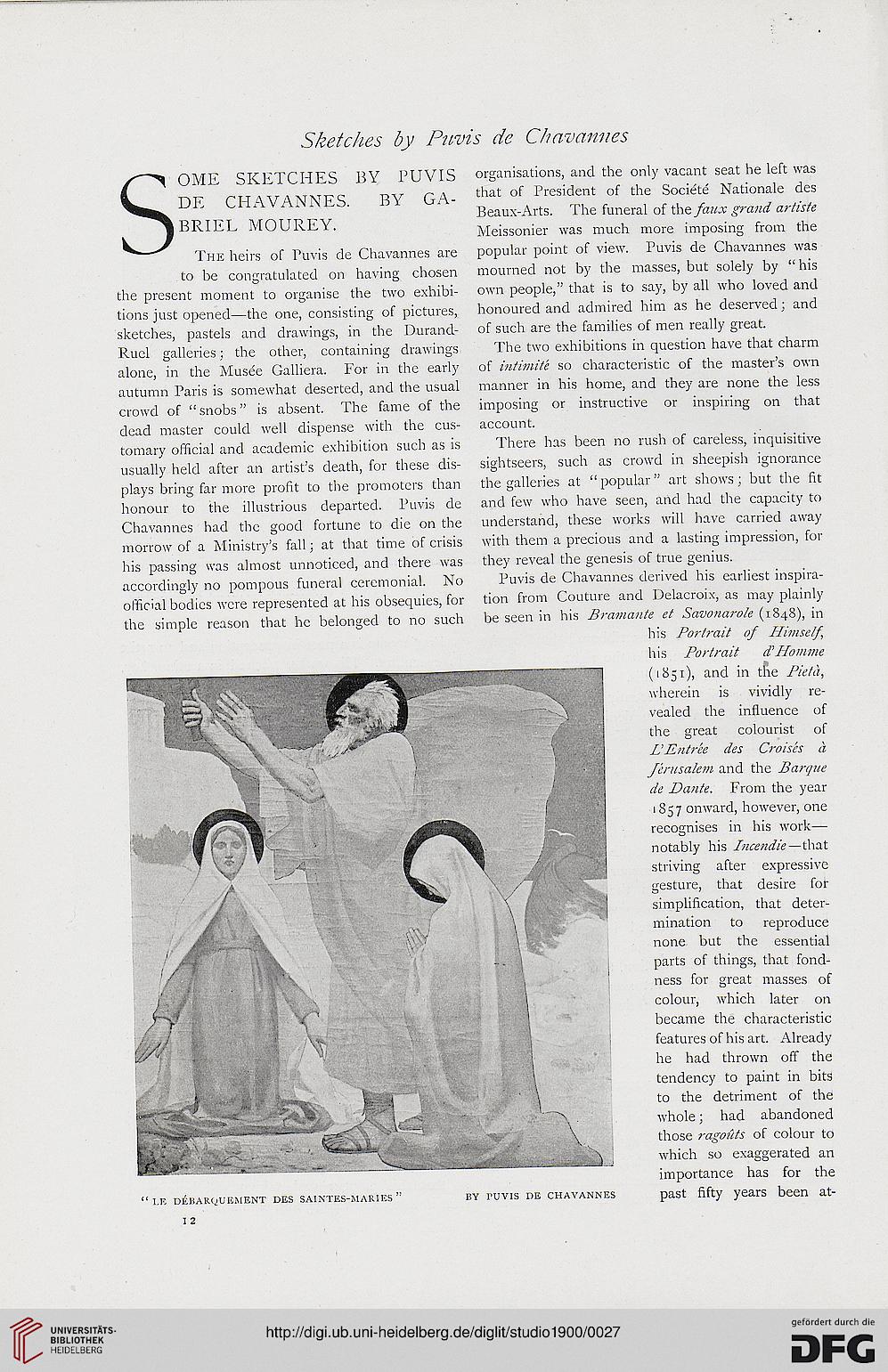 SOME SKETCHES BY PUVIS organisations, and the only vacant seat he left was
DF CHAVANNES BY GA- t^lat °^ President of the Societe Nationale des
BRIEL MOUPEY Beaux-Arts. The funeral of the faux grand artiste

Meissonier was much more imposing from the
The heirs of Puvis de Chavannes are popular point of view. Puvis de Chavannes was
to be congratulated on having chosen mourned not by the masses, but solely by "his
the present moment to organise the two exhibi- own people," that is to say, by all who loved and
tions just opened—the one, consisting of pictures, honoured and admired him as he deserved; and
sketches, pastels and drawings, in the Durand- of such are the families of men really great.
Ruel galleries ; the other, containing drawings The two exhibitions in question have that charm
alone, in the Musee Galliera. For in the early of intimite so characteristic of the master's own
autumn Paris is somewhat deserted, and the usual manner in his home, and they are none the less
crowd of "snobs" is absent. The fame of the imposing or instructive or inspiring on that
dead master could well dispense with the cus- account.

tomary official and academic exhibition such as is There has been no rush of careless, inquisitive
usually held after an artist's death, for these dis- sightseers, such as crowd in sheepish ignorance
plays bring far more profit to the promoters than the galleries at " popular " art shows; but the fit
honour to the illustrious departed. Puvis de and few who have seen, and had the capacity to
Chavannes had the good fortune to die on the understand, these works will have carried away
morrow of a Ministry's fall; at that time of crisis with them a precious and a lasting impression, for
his passing was almost unnoticed, and there was they reveal the genesis of true genius,
accordingly no pompous funeral ceremonial. No Puvis de Chavannes derived his earliest inspira-
olficial bodies were represented at his obsequies, for tion from Couture and Delacroix, as may plainly
the simple reason that he belonged to no such be seen in his Bramante et Savonarole (1848), in

his Portrait of Himself
his Portrait aVHomme
(1851), and in the Pietii,
wherein is vividly re-
vealed the influence of
the great colourist of
L'JZntree des Croises a
Jerusalem and the Barque
de Dante. From the year
1S57 onward, however, one
recognises in his work—
notably his Incendie—that
striving after expressive
gesture, that desire for
simplification, that deter-
mination to reproduce
none but the essential
parts of things, that fond-
ness for great masses of
colour, which later on
became the characteristic
features of his art. Already
he had thrown off the
tendency to paint in bits
to the detriment of the
whole; had abandoned
those ragouts of colour to
which so exaggerated an
importance has for the

: LE DEBARQUEMENT DES SA1NTES-MARIES " BY TUVIS DE CHAVANNES past fifty years been at-