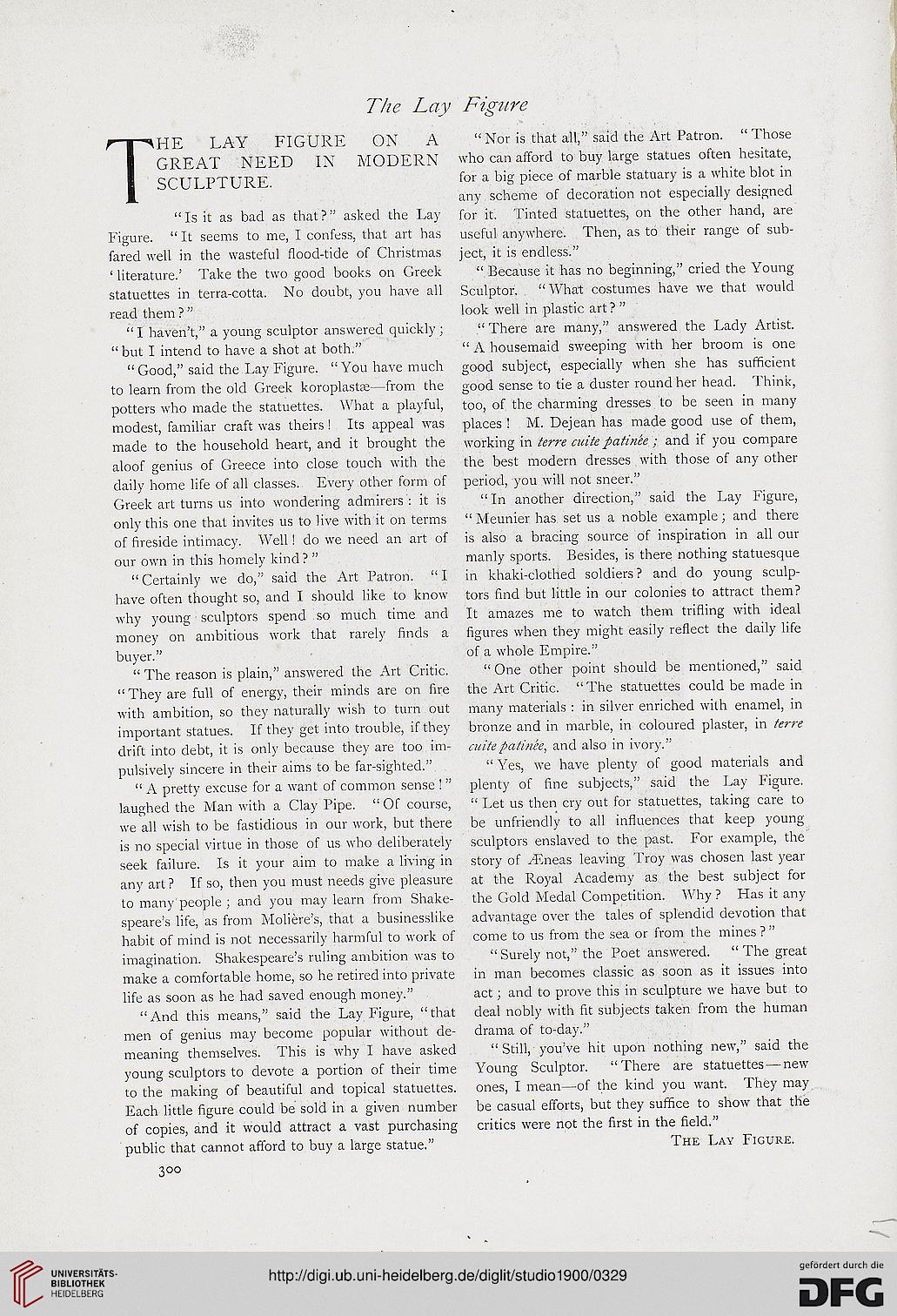 THE LAY FIGURE ON A "Nor is that all," said the Art Patron. "Those
GREAT NEED IN MODERN who can afford to buy large statues often hesitate,
SCULPTURE. f°r a big piece of marble statuary is a white blot in
any scheme of decoration not especially designed
" Is it as bad as that ?" asked the Lay for it. Tinted statuettes, on the other hand, are
Figure. " It seems to me, I confess, that art has useful anywhere. Then, as to their range of sub-
fared well in the wasteful flood-tide of Christmas ject, it is endless."

1 literature.' Take the two good books on Greek " Because it has no beginning," cried the Young

statuettes in terra-cotta. No doubt, you have all Sculptor. " What costumes have we that would

" I haven't," a young sculptor answered quickly ; " There are many," answered the Lady Artist,

"but I intend to have a shot at both." " A housemaid sweeping with her broom is one

" Good," said the Lay Figure. "You have much good subject, especially when she has sufficient

to learn from the old Greek koroplastas—from the good sense to tie a duster round her head. Think,

potters who made the statuettes. What a playful, too, of the charming dresses to be seen in many

modest, familiar craft was theirs! Its appeal was places ! M. Dejean has made good use of them,

made to the household heart, and it brought the working in terre cuitepatinee ; and if you compare

daily home life of all classes. Every other form of period, you will not sneer."

Greek art turns us into wondering admirers : it is " In another direction," said the Lay Figure,

only this one that invites us to live with it on terms " Meunier has set us a noble example ; and there

of fireside intimacy. Well! do we need an art of is also a bracing source of inspiration in all our

our own in this homely kind ? " manly sports. Besides, is there nothing statuesque

"Certainly we do," said the Art Patron. "I in khaki-clothed soldiers? and do young sculp-

have often thought so, and I should like to know tors find but little in our colonies to attract them?

buyer." of a whole Empire."

" The reason is plain," answered the Art Critic. " One other point should be mentioned," said

" They are full of energy, their minds are on fire the Art Critic. " The statuettes could be made in

with ambition, so they naturally wish to turn out many materials : in silver enriched with enamel, in

important statues. If they get into trouble, if they bronze and in marble, in coloured plaster, in terre

drift into debt, it is only because they are too im- cuite patinee, and also in ivory."

pulsively sincere in their aims to be far-sighted." " Yes, we have plenty of good materials and

" A pretty excuse for a want of common sense ! " plenty of fine subjects," said the Lay Figure,

laughed the Man with a Clay Pipe. " Of course, " Let us then cry out for statuettes, taking care to

we all wish to be fastidious in our work, but there be unfriendly to all influences that keep young

is no special virtue in those of us who deliberately sculptors enslaved to the past. For example, the

seek failure. Is it your aim to make a living in story of ^Eneas leaving Troy was chosen last year

any art? If so, then you must needs give pleasure at the Royal Academy as the best subject for

to many people ; and you may learn from Shake- the Gold Medal Competition. Why? Has it any

speare's life, as from Moliere's, that a businesslike advantage over the tales of splendid devotion that

habit of mind is not necessarily harmful to work of come to us from the sea or from the mines ? "

imagination. Shakespeare's ruling ambition was to "Surely not," the Poet answered. "The great

make a comfortable home, so he retired into private in man becomes classic as soon as it issues into

life as soon as he had saved enough money." act; and to prove this in sculpture we have but to

"And this means," said the Lay Figure, "that deal nobly with fit subjects taken from the human

men of genius may become popular without de- drama of to-day."

meaning themselves. This is why I have asked " Still, you've hit upon nothing new," said the

young sculptors to devote a portion of their time Young Sculptor. "There are statuettes — new

to the making of beautiful and topical statuettes, ones, I mean—of the kind you want. They may

Each little figure could be sold in a given number be casual efforts, but they suffice to show that the

of copies, and it would attract a vast purchasing critics were not the first in the field."

public that cannot afford to buy a large statue," The Lay Figure.
300