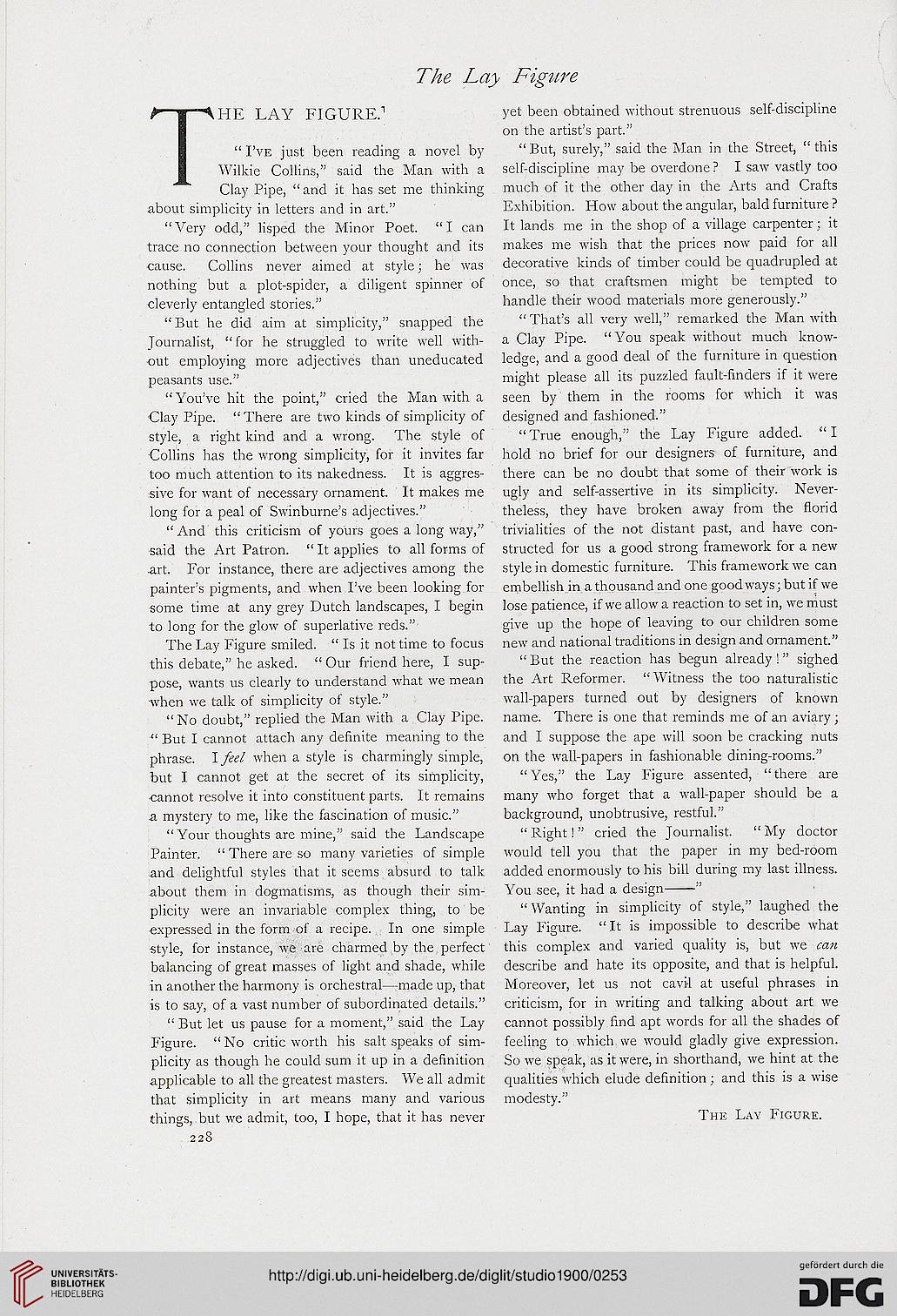 THE LAY FIGURE.1 Yet been obtained without strenuous self-discipline
on the artist's part."

"I've just been reading a novel by "But, surely," said the Man in the Street, "this

Wilkie Collins," said the Man with a self-discipline may be overdone? I saw vastly too

Clay Pipe, "and it has set me thinking much of it the other day in the Arts and Crafts

about simplicity in letters and in art." Exhibition. How about the angular, bald furniture ?

"Very odd," lisped the Minor Poet. "I can It lands me in the shop of a village carpenter; it

cause. Collins never aimed at style; he was decorative kinds of timber could be quadrupled at

nothing but a plot-spider, a diligent spinner of once, so that craftsmen might be tempted to

"But he did aim at simplicity," snapped the "That's all very well," remarked the Man with
Journalist, "for he struggled to write well with- a Clay Pipe. "You speak without much know-
out employing more adjectives than uneducated ledge, and a good deal of the furniture in question
peasants use." might please all its puzzled fault-finders if it were
"You've hit the point," cried the Man with a seen by them in the rooms for which it was
Clay Pipe. "There are two kinds of simplicity of designed and fashioned."

style, a right kind and a wrong. The style of " True enough," the Lay Figure added. " I
Collins has the wrong simplicity, for it invites far hold no brief for our designers of furniture, and
too much attention to its nakedness. It is aggres- there can be no doubt that some of their work is
rsive for want of necessary ornament. It makes me ugly and self-assertive in its simplicity. Never-
long for a peal of Swinburne's adjectives." theless, they have broken away from the florid

"And this criticism of yours goes a long way," trivialities of the not distant past, and have con-
said the Art Patron. " It applies to all forms of structed for us a good strong framework for a new
art. For instance, there are adjectives among the style in domestic furniture. This framework we can
painter's pigments, and when I've been looking for embellish in a thousand and one good ways; but if we
some time at any grey Dutch landscapes, I begin lose patience, if we allow a reaction to set in, we must
to long for the glow of superlative reds." give up the hope of leaving to our children some

The Lay Figure smiled. " Is it not time to focus new and national traditions in design and ornament."

this debate," he asked. "Our friend here, I sup- "But the reaction has begun already!" sighed

pose, wants us clearly to understand what we mean the Art Reformer. " Witness the too naturalistic

when we talk of simplicity of style." wall-papers turned out by designers of known

" No doubt," replied the Man with a Clay Pipe. name. There is one that reminds me of an aviary;

phrase. I feel when a style is charmingly simple, on the wall-papers in fashionable dining-rooms."

but I cannot get at the secret of its simplicity, "Yes," the Lay Figure assented, "there are

cannot resolve it into constituent parts. It remains many who forget that a wall-paper should be a

a mystery to me, like the fascination of music." background, unobtrusive, restful."

"Your thoughts are mine," said the Landscape "Right!" cried the Journalist. "My doctor

Painter. " There are so many varieties of simple would tell you that the paper in my bed-room

and delightful styles that it seems absurd to talk added enormously to his bill during my last illness.

about them in dogmatisms, as though their sim- You see, it had a design-"

plicity were an invariable complex thing, to be " Wanting in simplicity of style," laughed the

expressed in the form of a recipe. In one simple Lay Figure. "It is impossible to describe what

style, for instance, we are charmed by the perfect this complex and varied quality is, but we can

balancing of great masses of light and shade, while describe and hate its opposite, and that is helpful,

in another the harmony is orchestral—made up, that Moreover, let us not cavil at useful phrases in

is to say, of a vast number of subordinated details." criticism, for in writing and talking about art we

" But let us pause for a moment," said the Lay cannot possibly find apt words for all the shades of

Figure. " No critic worth his salt speaks of sim- feeling to which we would gladly give expression,

plicity as though he could sum it up in a definition So we speak, as it were, in shorthand, we hint at the

applicable to all the greatest masters. We all admit qualities which elude definition ; and this is a wise

that simplicity in art means many and various modesty."