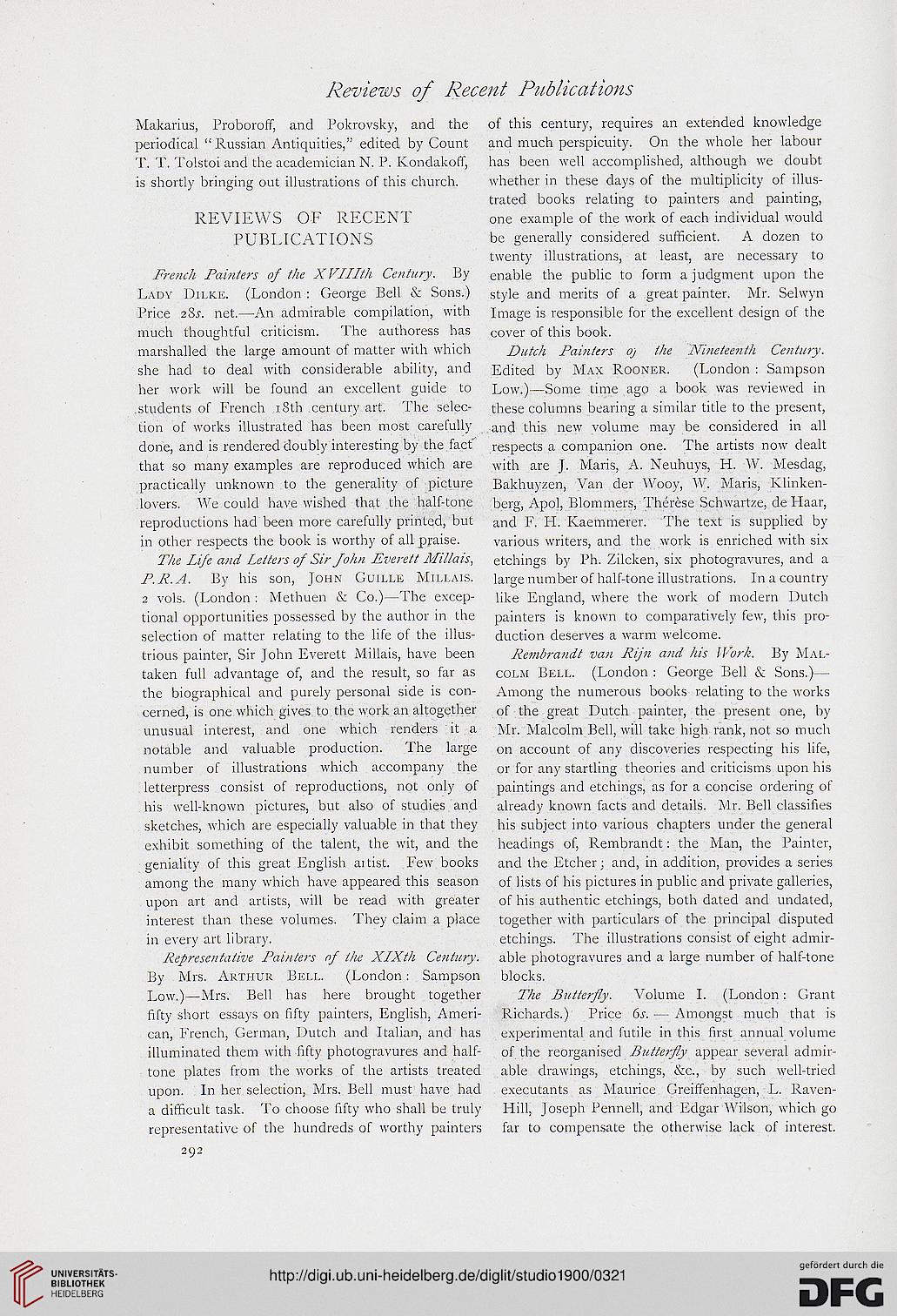 Makarius, Proboroff, and Pokrovsky, and the
periodical " Russian Antiquities," edited by Count
'j". T. Tolstoi and the academician N. P. Kondakoff,
is shortly bringing out illustrations of this church.

French Painters of the XVIIIth Century. By
Lady Dilke. (London : George Bell & Sons.)
Price 28J. net.—An admirable compilation, with
much thoughtful criticism. The authoress has
marshalled the large amount of matter with which
she had to deal with considerable ability, and
her work will be found an excellent guide to
students of French 18th century art. The selec-
tion of works illustrated has been most carefully
done, and is rendered doubly interesting by the fact'
that so many examples are reproduced which are
practically unknown to the generality of picture
lovers. We could have wished that the half-tone
reproductions had been more carefully printed, but
in other respects the book is worthy of all praise.

The Life and Letters of Sir John Everett Millais,
P.R.A. By his son, John Guille Millais.
2 vols. (London : Methuen & Co.)—The excep-
tional opportunities possessed by the author in the
selection of matter relating to the life of the illus-
trious painter, Sir John Everett Millais, have been
taken full advantage of, and the result, so far as
the biographical and purely personal side is con-
cerned, is one which gives to the work an altogether
unusual interest, and one which renders it a
notable and valuable production. The large
number of illustrations which accompany the
letterpress consist of reproductions, not only of
his well-known pictures, but also of studies and
sketches, which are especially valuable in that they
exhibit something of the talent, the wit, and the
geniality of this great English artist. Few books
among the many which have appeared this season
upon art and artists, will be read with greater
interest than these volumes. They claim a place
in every art library.

Representative Painters of the XLXth Century.
By Mrs. Arthur Bell. (London: Sampson
Low.)—Mrs. Bell has here brought together
fifty short essays on fifty painters, English, Ameri-
can, French, German, Dutch and Italian, and has
illuminated them with fifty photogravures and half-
tone plates from the works of the artists treated
upon. In her selection, Mrs. Bell must have had
a difficult task. To choose fifty who shall be truly
representative of the hundreds of worthy painters
292

of this century, requires an extended knowledge
and much perspicuity. On the whole her labour
has been well accomplished, although we doubt
whether in these days of the multiplicity of illus-
trated books relating to painters and painting,
one example of the work of each individual would
be generally considered sufficient. A dozen to
twenty illustrations, at least, are necessary to
enable the public to form a judgment upon the
style and merits of a great painter. Mr. Selwyn
Image is responsible for the excellent design of the
cover of this book.

Dutch Painters qj the Nineteenth Century.
Edited by Max Rooner. (London : Sampson
Low.)—Some time ago a book was reviewed in
these columns bearing a similar title to the present,
and this new volume may be considered in all
respects a companion one. The artists now dealt
with are J. Maris, A. Neuhuys, H. W. Mesdag,
Bakhuyzen, Van der Wooy, W. Maris, Klinken-
berg, Apol, Blommers, Therese Schwartze, de Haar,
and F. H. Kaemmerer. The text is supplied by
various writers, and the work is enriched with six
etchings by Ph. Zilcken, six photogravures, and a
large number of half-tone illustrations. In a country
like England, where the work of modern Dutch
painters is known to comparatively few, this pro-
duction deserves a warm welcome.

Rembrandt van Rijn and his Work. By Mal-
colm Bell. (London : George Bell & Sons.)—
Among the numerous books relating to the works
of the great Dutch painter, the present one, by
Mr. Malcolm Bell, will take high rank, not so much
on account of any discoveries respecting his life,
or for any startling theories and criticisms upon his
paintings and etchings, as for a concise ordering of
already known facts and details. Mr. Bell classifies
his subject into various chapters under the general
headings of, Rembrandt: the Man, the Painter,
and the Etcher; and, in addition, provides a series
of lists of his pictures in public and private galleries,
of his authentic etchings, both dated and undated,
together with particulars of the principal disputed
etchings. The illustrations consist of eight admir-
able photogravures and a large number of half-tone
blocks.

The Butterfly. Volume I. (London: Grant
Richards.) Price 6s. — Amongst much that is
experimental and futile in this first annual volume
of the reorganised Lhitterfiy appear several admir-
able drawings, etchings, &c, by such well-tried
executants as Maurice Greiffenhagen, L. Raven-
Hill, Joseph Pennell, and Edgar Wilson, which go
far to compensate the otherwise lack of interest.