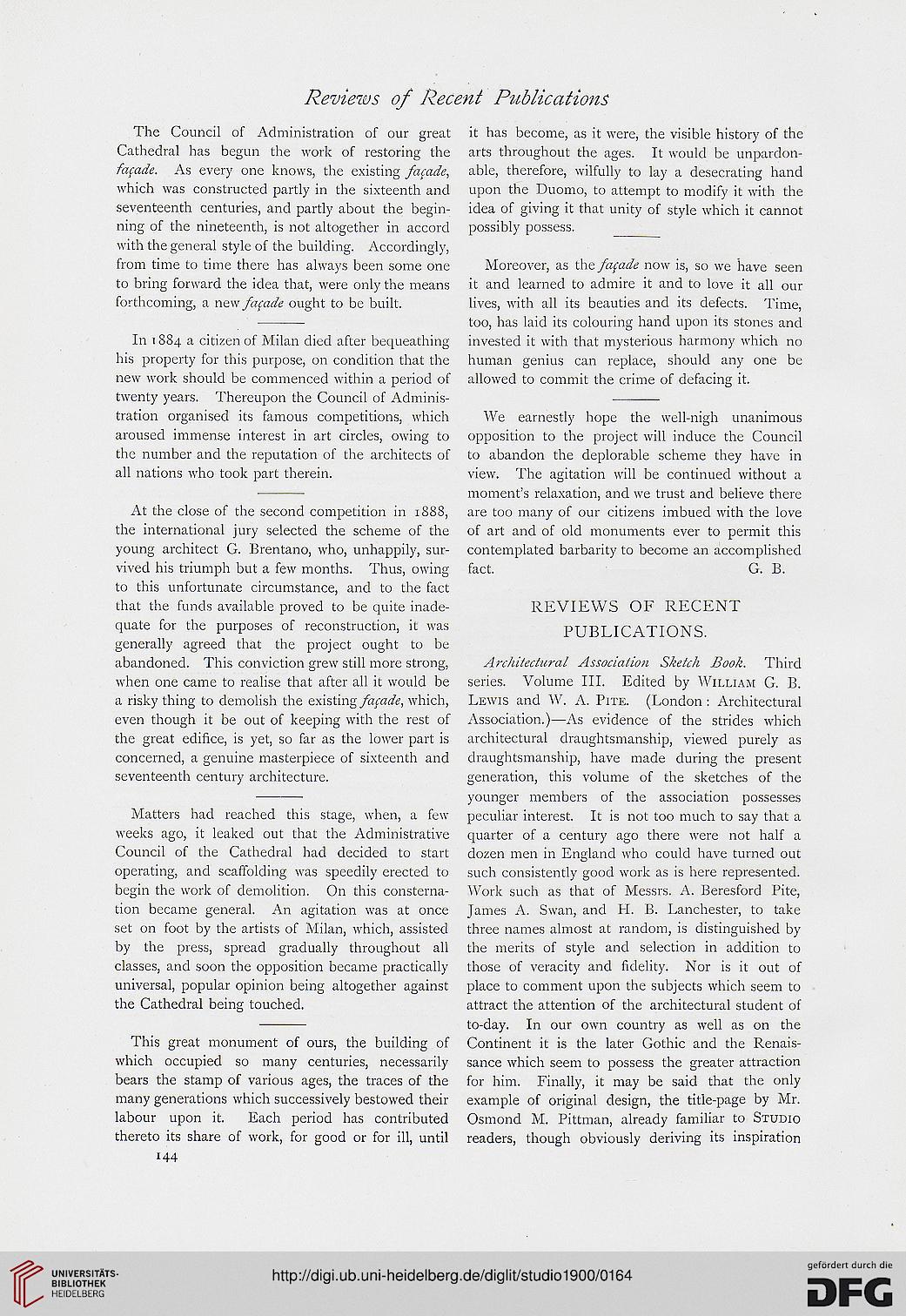 The Council of Administration of our great
Cathedral has begun the work of restoring the
facade. As every one knows, the existing facade,
which was constructed partly in the sixteenth and
seventeenth centuries, and partly about the begin-
ning of the nineteenth, is not altogether in accord
with the general style of the building. According!)',
from time to time there has always been some one
to bring forward the idea that, were only the means
forthcoming, a new facade ought to be built.

In 1884 a citizen of Milan died after bequeathing
his property for this purpose, on condition that the
new work should be commenced within a period of
twenty years. Thereupon the Council of Adminis-
tration organised its famous competitions, which
aroused immense interest in art circles, owing to
the number and the reputation of the architects of
all nations who took part therein.

At the close of the second competition in 1888,
the international jury selected the scheme of the
young architect G. Brentano, who, unhappily, sur-
vived his triumph but a few months. Thus, owing
to this unfortunate circumstance, and to the fact
that the funds available proved to be quite inade-
quate for the purposes of reconstruction, it was
generally agreed that the project ought to be
abandoned. This conviction grew still more strong,
when one came to realise that after all it would be
a risky thing to demolish the existing facade, which,
even though it be out of keeping with the rest of
the great edifice, is yet, so far as the lower part is
concerned, a genuine masterpiece of sixteenth and
seventeenth century architecture.

Matters had reached this stage, when, a few
weeks ago, it leaked out that the Administrative
Council of the Cathedral had decided to start
operating, and scaffolding was speedily erected to
begin the work of demolition. On this consterna-
tion became general. An agitation was at once
set on foot by the artists of Milan, which, assisted
by the press, spread gradually throughout all
classes, and soon the opposition became practically
universal, popular opinion being altogether against
the Cathedral being touched.

This great monument of ours, the building of
which occupied so many centuries, necessarily
bears the stamp of various ages, the traces of the
many generations which successively bestowed their
labour upon it. Each period has contributed
thereto its share of work, for good or for ill, until
144

it has become, as it were, the visible history of the
arts throughout the ages. It would be unpardon-
able, therefore, wilfully to lay a desecrating hand
upon the Duomo, to attempt to modify it with the
idea of giving it that unity of style which it cannot
possibly possess.

Moreover, as the facade now is, so we have seen
it and learned to admire it and to love it all our
lives, with all its beauties and its defects. Time,
too, has laid its colouring hand upon its stones and
invested it with that mysterious harmony which no
human genius can replace, should any one be
allowed to commit the crime of defacing it.

We earnestly hope the well-nigh unanimous
opposition to the project will induce the Council
to abandon the deplorable scheme they have in
view. The agitation will be continued without a
moment's relaxation, and we trust and believe there
are too many of our citizens imbued with the love
of art and of old monuments ever to permit this
contemplated barbarity to become an accomplished
fact. G. B.

Architectural Association Sketch Book. Third
series. Volume III. Edited by William G. B.
Lewis and W. A. Pite. (London : Architectural
Association.)—As evidence of the strides which
architectural draughtsmanship, viewed purely as
draughtsmanship, have made during the present
generation, this volume of the sketches of the
younger members of the association possesses
peculiar interest. It is not too much to say that a
quarter of a century ago there were not half a
dozen men in England who could have turned out
such consistently good work as is here represented.
Work such as that of Messrs. A. Beresford Pite,
James A. Swan, and H. B. Lanchester, to take
three names almost at random, is distinguished by
the merits of style and selection in addition to
those of veracity and fidelity. Nor is it out of
place to comment upon the subjects which seem to
attract the attention of the architectural student of
to-day. In our own country as well as on the
Continent it is the later Gothic and the Renais-
sance which seem to possess the greater attraction
for him. Finally, it may be said that the only
example of original design, the title-page by Mr.
Osmond M. Pittman, already familiar to Studio
readers, though obviously deriving its inspiration