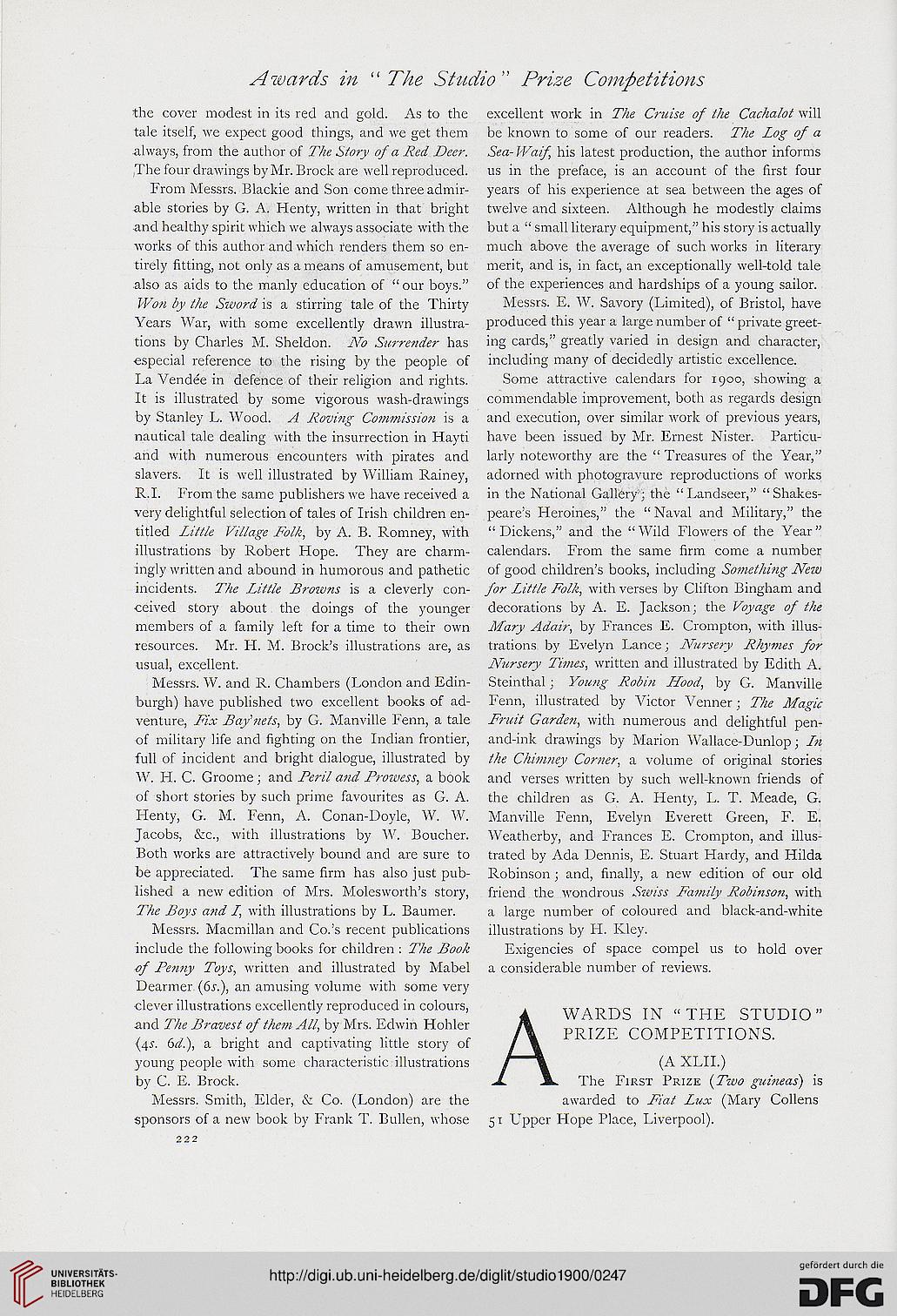 the cover modest in its red and gold. As to the excellent work in The Cruise of the Cachalot will

tale itself, we expect good things, and we get them be known to some of our readers. The Log of a

always, from the author of The Story of a Red Deer. Sea-Waif his latest production, the author informs

The four drawings by Mr. Brock are well reproduced, us in the preface, is an account of the first four

From Messrs. Blackie and Son come three admir- years of his experience at sea between the ages of
able stories by G. A. Henty, written in that bright twelve and sixteen. Although he modestly claims
and healthy spirit which we always associate with the but a " small literary equipment," his story is actually
works of this author and which renders them so en- much above the average of such works in literary
tirely fitting, not only as a means of amusement, but merit, and is, in fact, an exceptionally well-told tale
also as aids to the manly education of " our boys." of the experiences and hardships of a young sailor.
Won by the Sword is a stirring tale of the Thirty Messrs. E. W. Savory (Limited), of Bristol, have
Years War, with some excellently drawn illustra- produced this year a large number of " private greet-
tions by Charles M. Sheldon. No Surrender has ing cards," greatly varied in design and character,
especial reference to the rising by the people of including many of decidedly artistic excellence.
La Vendee in defence of their religion and rights. Some attractive calendars for 1900, showing a
It is illustrated by some vigorous wash-drawings commendable improvement, both as regards design
by Stanley L. Wood. A Roving Commission is a and execution, over similar work of previous years,
nautical tale dealing with the insurrection in Hayti have been issued by Mr. Ernest Nister. Particu-
arid with numerous encounters with pirates and larly noteworthy are the " Treasures of the Year,"
slavers. It is well illustrated by William Rainey, adorned with photogravure reproductions of works
R.I. From the same publishers we have received a in the National Gallery; the " Landseer," "Shakes-
very delightful selection of tales of Irish children en- peare's Heroines," the " Naval and Military," the
titled Little Village Folk, by A. B. Romney, with " Dickens," and the "Wild Flowers of the Year"
illustrations by Robert Hope. They are charm- calendars. From the same firm come a number
ingly written and abound in humorous and pathetic of good children's books, including Something New
incidents. The Little Browns is a cleverly con- for Little Folk, with verses by Clifton Bingham and
ceived story about the doings of the younger decorations by A. E. Jackson; the Voyage of the
members of a family left for a time to their own Mary Adair, by Frances E. Crompton, with illus-
resources. Mr. H. M. Brock's illustrations are, as trations by Evelyn Lance; Nursery Rhymes for
usual, excellent. Nursery Times, written and illustrated by Edith A.

of military life and fighting on the Indian frontier, and-ink drawings by Marion Wallace-Dunlop; Ln

full of incident and bright dialogue, illustrated by the Chimney Corner, a volume of original stories

W. H. C. Groome; and Peril and Prowess, a book and verses written by such well-known friends of

of short stories by such prime favourites as G. A. the children as G. A. Henty, L. T. Meade, G.

Both works are attractively bound and are sure to trated by Ada Dennis, E. Stuart Hardy, and Hilda

be appreciated. The same firm has also just pub- Robinson; and, finally, a new edition of our old

The Boys and L, with illustrations by L. Baumer. a large number of coloured and black-and-white

include the following books for children : The Book Exigencies of space compel us to hold over

■of Penny Toys, written and illustrated by Mabel a considerable number of reviews.
Dearmer (6s.), an amusing volume with some very

clever illustrations excellently reproduced in colours, WARDS IN "THE STUDIO"

and The Bravest of them All, by Mrs. Edwin Hohler
{4.?. 6d.), a bright and captivating little story of

young people with some characteristic illustrations / \ (A XLII.)