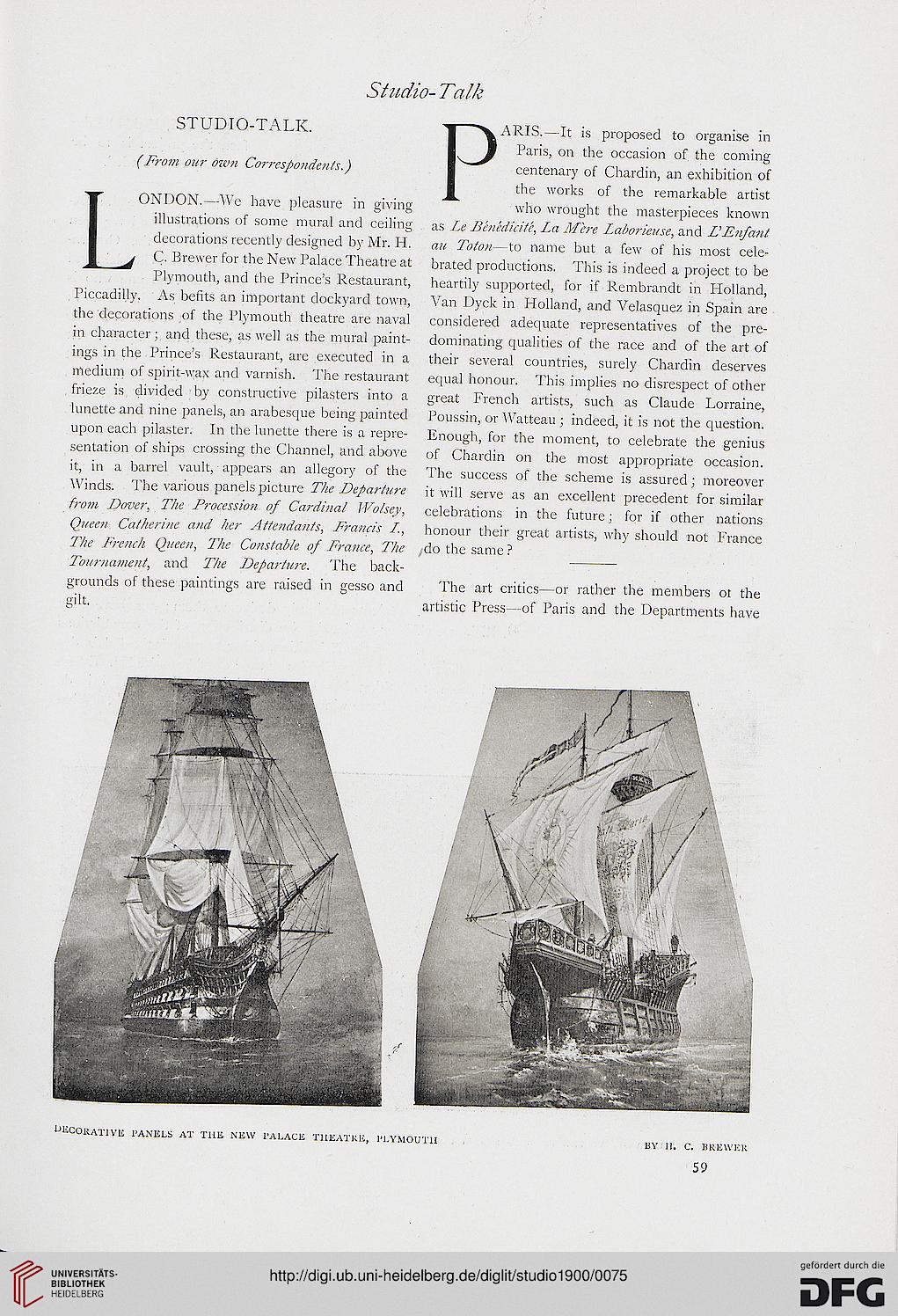 LONDON.—We have pleasure in giving
illustrations of some mural and ceiling
decorations recently designed by Mr. H.
C. Brewer for the New Palace Theatre at
Plymouth, and the Prince's Restaurant,
Piccadilly. As befits an important dockyard town,
the decorations of the Plymouth theatre are naval
in character ; and these, as well as the mural paint-
ings in the Prince's Restaurant, are executed in a
medium of spirit-wax and varnish. The restaurant
frieze is divided by constructive pilasters into a
lunette and nine panels, an arabesque being painted
upon each pilaster. In the lunette there is a repre-
sentation of ships crossing the Channel, and above
it, in a barrel vault, appears an allegory of the
Winds. The various panels picture The Departure
from Dover, The Procession of Cardinal Wolsey,
Queen Catherine and her Attendants, Francis L,
The French Queen, The Constable of France, The
Tournament, and The Departure. The back-
grounds of these paintings are raised in gesso and
gilt.

PARIS.—It is proposed to organise in
Paris, on the occasion of the coming
centenary of Chardin, an exhibition of
the works of the remarkable artist
who wrought the masterpieces known
as Le Bentdicitc, La Mere Laborieuse, and L'Enfant
au Toton—to name but a few of his most cele-
brated productions. This is indeed a project to be
heartily supported, for if Rembrandt in Holland,
Van Dyck in Holland, and Velasquez in Spain are
considered adequate representatives of the pre-
dominating qualities of the race and of the art of
their several countries, surely Chardin deserves
equal honour. This implies no disrespect of other
great French artists, such as Claude Lorraine,
Poussin, or Watteau ; indeed, it is not the question.
Enough, for the moment, to celebrate the genius
of Chardin on the most appropriate occasion.
The success of the scheme is assured; moreover
it will serve as an excellent precedent for similar
celebrations in the future; for if other nations
honour their great artists, why should not France
,do the same ?